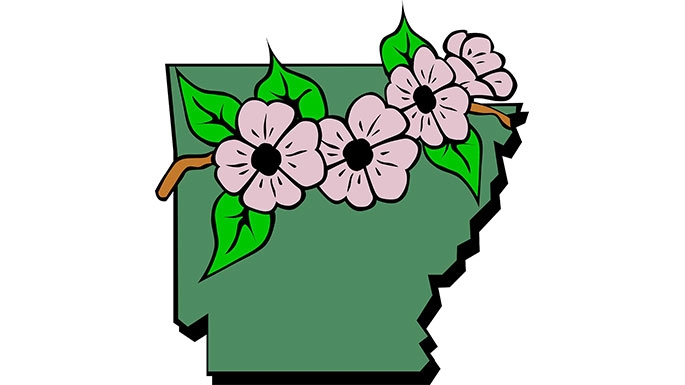 History, culture, nature, the arts—the area is a microcosm of the land of plenty.

Walking down a dark hallway in the basement of the 1886 Crescent Hotel in Eureka Springs, Arkansas, I approached the room known as The Morgue with trepidation. Bryan, our guide for this spooky ghost tour, walked into the musty windowless room first and said to the “energies” he sensed there, “Put your needles away. No swabbing, Celeste.” Part of me wanted to laugh, and the other part wanted to run screaming out of this creepy place.

It’s human nature to want to see a ghost when you’re on a tour like this. Other participants had been busy taking photos on the tour, trying to capture orbs, which are invisible, but somehow appear in photographs. I actually did see white orbs both on a digital camera and on video footage taken of guests who’d made special arrangements to sleep in The Morgue.

Personally, the thought of sleeping in this room, where Norman Baker, a vaudeville performer turned “doctor,” conducted autopsies on former patients, was enough to make me drop dead of fright. But I was fascinated by the idea of ghosts wandering around this elegant historic hotel, which had served as a hospital for cancer victims in the early-1900s.

What was I doing in Eureka Springs on a ghost tour? It was just one leg of a trip designed to showcase Northwest Arkansas, a “rather extraordinary place,” as one local described the region. After four days of covering a lot of ground and seeing a variety of attractions, I could see why this region is rapidly becoming both a worthwhile tourist destination and a hub for international business.

ON THE MAP
Who else but Sam Walton was responsible for helping put Northwest Arkansas on the map? In 1945, Sam and his wife, Helen, opened a variety store called Walton’s in downtown Bentonville. Now the original store is home to Wal-Mart’s Visitor Center, where you can learn more about the evolution of the Wal-Mart empire.

Thanks to Sam and Helen and newer generations of Waltons, Northwest Arkansas, home to Wal-Mart corporate offices and those of countless vendors, is a thriving region with upscale dining, fine accommodations, and plenty to see and do—particularly for outdoor lovers.

For starters I was keen to learn a little more about the history of the area. Down the highway in Fort Smith sits a gem of an attraction called Miss Laura’s, the only bordello on the National Historic Register. Currently serving as the city’s visitor center, Miss Laura’s offers a glimpse into our country’s early days.

The rooms upstairs are decorated in early 20th-century style, and above each door, you’ll see the name of the working girls who plied their wares inside. Kitty, Lanna, Mollie, Betsy, Dixie, and Jessie were among Miss Laura’s employees. Our tour guide portrayed Miss Laura and wore a bright red dress and flashy rings on every finger.

For another glimpse of history, stop by the Fort Smith historic site, where you can see the remains of two frontier forts as well as a reproduction of the 1886 gallows, a stark reminder of the lawlessness of our country’s early days. The Barracks-Courthouse-Jail complex contains a visitor’s center with exhibits depicting the Trail of Tears, as well as Fort Smith’s important contributions to American history.

Air gun aficionados will want to visit the Daisy Airgun Museum in downtown Rogers, to the west of Bentonville, where memorabilia dating back to Daisy’s early days is on exhibit. From centuries-old air guns to mementoes from “A Christmas Story,” the museum has plenty to ponder. An essay called “A Boy is a Boy” displayed on an old-fashioned poster offered an interesting look at the simple pleasures of boyhood in days gone by. Nearby the Rogers Historical Museum features thoughtful exhibits about the region, including the 1895 Hawkins House, where you can see how families lived more than a century ago.

Another legacy from the Walton family, Crystal Bridges Museum, located in Bentonville on property donated by the Waltons, opened in 2011 and houses an amazing American art collection begun by Alice Walton. The museum complex is a work of art in itself, featuring 100,000 square feet of public space spread out among several pavilions. Sculpture gardens, walking trails, and an outdoor concert area ensures Crystal Bridges attracts nature lovers as well.

STAR-STUDDED SKY
Speaking of nature, you can’t go far in these parts without finding great opportunities for enjoying the outdoors. In Rogers you’ll want to visit War Eagle Cavern owned by Dennis and Vickie Boyer. According to legend, War Eagle was a Cherokee Indian chief who died in a battle over an Indian maiden. While War Eagle may or may not have visited the cave that bears his name, Dennis says Native Americans definitely used the cave for shelter and perhaps ceremonies.

Now it’s home to a hundred thousand bats, and as we walked through the cave, bats hung upside down from the ceiling, their wings folded tightly around their bodies. While I’ve never been fond of bats, these creatures—most barely three inches in length—hardly looked frightening. Nevertheless, I was glad to be back out under the autumn sky when the tour ended.

One afternoon we hiked to Eden Falls, about an hour southeast of Rogers in Lost Valley State Park. Nestled in the Ozark Mountains, this park is part of the Buffalo National River area, an oasis for hikers and boaters. Lost Valley isn’t lost, however, nor is it a valley. Someone took poetic license with the name, I suppose. The three-mile moderate hike past boulders, bluff shelters, caves, and wildflowers offers pleasant scenery.

More scenery was on tap afterwards as I headed to Buffalo Outdoor Center, where owners Mike and Rhonda Mills have created a peaceful sanctuary for those seeking an escape. A dozen or so cabins dot the mountainside, each offering breathtaking views from rocking chairs on cozy front porches. Cabins range from rustic to luxurious and feature fireplaces and fully equipped kitchens. I know I felt miles away from anywhere, especially after sundown as I stood peering out into the star-studded inky sky, where it seemed I could see forever.

Hiking was on the agenda again the next morning when I ventured to a favorite destination in the Ozarks for those in the know. Whitaker Point, also known as Hawksbill Crag, is a gorgeous bluff jutting out like a hawk’s bill over a valley far below. The fall colors lent a golden glow to this picturesque spot, and the wind lifted dancing leaves, sparkling like fairy dust, up in gentle spirals.

The next day I continued my outdoor explorations with a kayak trip along the White River in Eureka Springs. After renting kayaks, we put-in just below Beaver Dam. From there it’s a leisurely four-mile float downriver past scenic views. After lunch I joined a trail ride and rode through woods and pastures, past wild deer grazing on patches of grass. Outdoor activities help relieve the stress of modern life, and I’m always thankful when I can get out on a horse, a kayak, or my own two feet to commune with nature.

LAND OF PLENTY
Back at the 1886 Crescent Hotel in Eureka Springs, another kind of communing was going on. During the two-hour tour we’d heard tales to raise the hair on the back of your neck. “Shadow people,” as Bryan liked to call them, were everywhere, and after naming a few, he told us detailed histories of how they had met their fates. Bryan explained that most of the ghosts had unfinished business, and until they tied up their affairs, they would continue to roam around the hotel. Michael, who fell from a scaffold, remained, as did Annabelle, a college student in a white dress who, according to Bryan, didn’t fall from an upper-story window. She was pushed.

Down in The Morgue out of the corner of my eye, I thought I glimpsed a red orb flashing quickly by. When I told Bryan, he said red orbs mean a ghost is upset. OK, now I was officially scared, and you can bet I was at the front of the line as we departed this creepy underground torture chamber.

Fortunately, nothing else about Eureka Springs was gloomy. This picturesque Victorian town is on the National Register of Historic Places and draws tens of thousands of tourists annually. Known as the Wedding Capital of the South, Eureka Springs is a popular spot to get married. While it was originally known for the underground springs that gave the town its name, it has now become an artist’s colony and its sidewalks are lined with galleries and boutiques.

As I strolled through the cozy town, I thought about how Northwest Arkansas had been full of pleasant surprises. History, culture, nature, the arts—the area is a microcosm of the land of plenty. With its low cost of living, it’s no wonder that many are choosing to retire to this corner of the state, where the economy is strong, the weather’s mild, and the people are friendly. I have a feeling there are more surprises in store for visitors and residents of the region. Just look out for the “shadow people.”