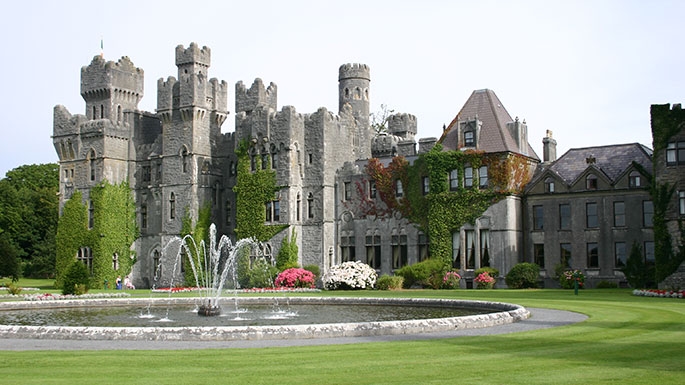 Ireland: A Place with Heart

Every place has a history, but in Ireland the past seems more tangible. Maybe it’s because the people still feel connected to the past, to the hardships and struggles their countrymen and women endured. But today’s Ireland doesn’t dwell on the past. Instead the past is simply part of who they are. You get the sense the Irish people don’t want to forget their troubled history, that somehow it inspires them, propels them to a bigger and better future.

When you visit Ireland, you sense this connection to the past in cities and towns, in heritage sites scattered across the countryside, and most importantly in the people themselves. On a recent visit with my husband, Peter, and our teen-aged son, Jasper, I found Ireland to be much more than a pretty destination. It’s a place with heart.

FLOWERS & FOUNTAINS
It didn’t take long for Peter, Jasper, and me to learn about Irish hospitality. After landing in Dublin, we rented a car and headed west, seeking an attraction in County Kildare I’d read about. Before long we discovered that what you hear about driving in Ireland is true. The roads are narrow, hilly, and curvy, and signs are never around when you need one. Driving also takes place on the left side of the road, a bizarre rearrangement of the cosmos that I could never get used to. Luckily, Peter was behind the wheel.

Our goal was Peatland World, where we hoped to learn about Ireland’s turf bogs, an important source of fuel. Instead we got hopelessly lost. In the middle of nowhere, it seemed, we came upon Orchard Garden Center—the only five-star garden center in Ireland, according to the sign—and decided to stop and ask for directions.

Inside an oasis of flowers and fountains welcomed us. As soon as we admitted we were lost tourists, the girl at the counter summoned Finnian, the manager, who said in his lovely Irish brogue, “Come have a mug of coffee and then we’ll help you on your way.” He ushered us into a lovely café and treated us to steaming mugs of delicious coffee.

After a pleasant interlude, we explored the amazing store, where plants, indoor and outdoor furniture, home décor, pottery, statuary, and garden supplies spread out over thousands of square feet of beautiful space. It was easy to get lost in there—and to lose track of time. Checking our watches, we realized we’d have to forego Peatland World, so we could make the four-hour crossing to Ireland’s west coast before nightfall. With a huge smile and a hearty handshake, Finnian showed us the route back to the highway (yay!) and wished us well.

That night I would fulfill a fantasy I think every girl has: to sleep in a castle. Blame the fairytale princesses who have pranced throughout our imagination, but something in our collective consciousness, I think, equates castles to living happily ever after. Fortunately a number of castles offer accommodations in Ireland, making it easy to fulfill a childhood fantasy. We lodged at Ashford Castle just north of Galway, nestled next to Lough Corrib, a lake that boasts world-class fishing. Once owned by the Guinness family, Ashford Castle has served as a luxury hotel since 1915.

The walls of a room inside the castle are covered with photos of illustrious guests who’ve stayed at Ashford Castle, among them Brad Pitt, Russell Crowe, Barbra Streisand, Johnny Cash, Pierce Brosnan, and various presidents and royalty. Peter, Jasper and I would be sleeping in pretty good company. We checked into our sumptuous rooms, oohing and ahhing over the plush bedding, ornate furnishings, and lake views. That night we dined on bistro-style fare at Cullen’s at the Cottage, a cozy restaurant near the castle. My lamb burger was perfect, and Peter and Jasper loved their dinner choices as well.

Besides fishing, activities at Ashford Castle include boating, falconry, horseback riding, tennis, golf, spa treatments, and clay shooting. Movie fans will want to visit Cong, the nearby village where John Ford’s “The Quiet Man” starring John Wayne was filmed. We only had time for a stroll around the picturesque grounds the next morning before heading on to our next destination. As we took a few photos of the castle before departing, I decided I was already living my own happily ever after.

WARM FUZZY FEELINGS
When planning this trip to Ireland, I’d come across a place called Foxford Woolen Mills, touted as a must-see attraction in County Mayo. Not sure what to expect, I emailed the manager, Joe Queenan, that we’d be coming and he said he’d be happy to meet us, adding that if we were hungry, he’d feed us lunch in the adjoining café.

The factory store attracts 100,000 annual visitors, most seeking one of Foxford’s treasured blankets. There’s an exhibit by the entrance that tells the history of the mills. In the 1890s Sister Mary Arsenius took up residence in Foxford, one of the poorest districts in Ireland. After setting up a school and providing relief to residents, she got the idea of starting up a woolen mill to provide jobs and financial security for the town. While many scoffed at her dream, Sister Arsenius persevered, and Foxford Mills became a thriving industry.

But that’s not the end of the story. In the 1980s the mill was facing bankruptcy when Joe, then an accountant, was called in to go over the books. He knew the town would collapse if the mill closed and had a sense that he could help. Gathering investors, Joe succeeded in keeping the mill open, and today business is flourishing.

“The reason we’ve grown,” Joe explained during a factory tour, “is we’ve put a lot of money into design. We go for a minimalist look with a few splashes of color. It reflects the Irish landscape.” When I said he must feel proud to have helped save the mill from closing, Joe shook his head humbly and said he was just one small part of the business’ success. In my opinion, his contributions to the mill rank right up there with Sister Arsenius’.

Indeed Foxford Mills is so much more than a factory store. It’s a testament to the tenacity of the Irish people. Employee Maureen Leonard called it a “feel-good factor” that you notice as soon as you walk into the building. It was true. I felt it. Our lunch at the café was delightful: homemade vegetable soup to start, followed by a goat cheese and red onion tart for me, a ham-and-cheddar sandwich for Peter, and pizza for Jasper. After lunch, I walked out of Foxford Mills with a warm fuzzy blanket that matched the warm fuzzy feelings I felt inside.

GREEN ROLLING HILLS
On the northern coast of County Mayo sits a unique heritage site called Ceide Fields. A local schoolteacher cutting turf to provide fuel for his family discovered the site in the 1930s. It was his son, however, who began excavating a few decades later and realized the fields had once been the home of Stone Age residents between five and six thousand years ago. These Neolithic settlers followed the Mesolithic hunter-gatherers and were the first to farm the land. Remnants of their settlement are located throughout ten square kilometers.

What’s unique about these ruins is how well preserved they are, having lain for thousands of years under successive layers of bogland, which formed due to environmental changes. In fact, it’s one of the most extensive Stone Age sites in the world, primarily because it’s been so well preserved underground. You have to use your imagination to visualize the ruins, however. To keep them from deteriorating, the government has chosen to let the ruins remain underground. You can see a sampling of the settlement that has been excavated: stone fences, a dwelling, an animal pen, but the vast majority of the site is hidden 6-8 feet underground.

So how do they know what’s underneath the bog? Our guide, Muirne Lyons, demonstrated how archaeologists used probes to explore beneath the surface and map out the settlement. Using carbon dating, scientists have traced artifacts from the site—a primitive plow, an ax, pottery shards—to the Neolithic Age.

The visitor’s center offers excellent exhibits to shed more light on this chapter in history as well as a movie about Ceide Fields. The stunning setting is also noteworthy. Surrounding the fields are lush green rolling hills dotted with grazing sheep and breathtaking views of the Atlantic, where sheer cliffs drop down into the sea. As we stood admiring the scenery, it felt like we were perched at the edge of the world.

Next month: Part 2 of our Irish adventure.