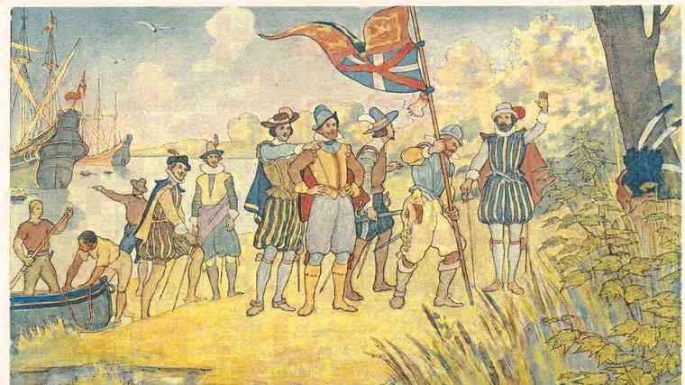 Any time you try to mix education with fun on a family vacation, you’re never quite sure whether the fun part will actually come true. I know. I’ve taken my three sons to an assortment of museums and historical sites over the years. In backpacks and strollers, the boys have traveled back in time, studied science, and encountered nature up close. For the most part, they’ve enjoyed our educational vacations over the years.

Not long ago, the five of us decided to spend a long weekend in the Williamsburg area, seeing the sights. Although the Historic Triangle is practically in our backyard, our family had never really explored its treasures. As the tourist literature exclaims, there really is “fun in every direction.” Herewith are a few highlights of our trip.

THE FIRST THANKSGIVING
The day after Thanksgiving dawned overcast and cool, and we hurriedly packed the car for our weekend getaway. Driving to Williamsburg for a day trip is easy enough from where we live, but we decided to book a hotel room for two nights and be “tourists.” I’d planned a full schedule for the three days we’d be in the Williamsburg area, choosing a mix of activities that I hoped would prove pleasing.

Our first stop was Berkeley Plantation, one of the historic Virginia plantations scattered along the James River, and the birthplace of President William Henry Harrison, our ninth president. He’s known for giving the longest inaugural speech on record on one of the coldest January days on record, two facts which led to his death just a month afterwards.

The plantation is also known as the site of the first official Thanksgiving. Mind you, this was not the feast the folks in Plymouth, Massachusetts like to call the first Thanksgiving. This historic first was a Thanksgiving service in 1619, during which a group of English settlers led by Captain John Woodlief fell to their knees at Berkeley after seventy-five days at sea and gave thanks for their safe arrival.

It wasn’t until 1726 that the three-story Georgian Brick manor house was completed. Since then Berkeley has undergone many changes, including a period of abandonment that ended when the Jamieson family bought the plantation in 1907. After a great deal of effort and expense, the buildings and grounds have been restored to their former glory.

After an introductory movie and a tour of the manor house, Peter, the boys, and I began walking to the First Official Thanksgiving site down by the river. As we followed the pathways through the terraced gardens that gently descend toward the James, we tried to envision what the landscape looked like for the first settlers. Before we reached the river, however, a sudden rainstorm blew in from the west. Lacking raincoats or an umbrella, we trotted back to the car and decided we’d see more of Berkeley Plantation another time.

COLONIAL KIDS
Saturday morning we were well met by bright sunlight and a bitter wind. Colonial Williamsburg was on our agenda, and we stumbled upon the Saturday Farmer’s Market in Merchant Square. Despite the cold, townspeople bundled in mufflers and mittens ambled along, shopping for fresh vegetables and flowers. More than a few people brought their dogs along for a stroll through the square, and Ross stopped to pet a puppy or two. I had to pass on the fresh produce since our hotel room didn’t have a kitchen, but it was fun to see what was for sale.

The Christmas season was just getting started, and the Colonial Williamsburg holiday planner brochure offered many tempting programs for the weeks between Thanksgiving and Christmas. One favorite event we’ve enjoyed in the past is the Grand Illumination held the first Sunday of December. It’s an old-fashioned celebration with bonfires and carol singing, musical entertainment and fireworks. Definitely a must-do around the holidays.

Make sure you pick up a Visitor’s Companion, the weekly newspaper that outlines the schedule of events and provides a handy map. Family events are highlighted, and we gravitated toward those we thought the kids would most enjoy. A “Children and Family Life” program in the Geddy House, for example, offered Scott, Ross, and Jasper a glimpse into the lives of Colonial kids. Even though it was cold, the boys loved trying out some children’s toys in the backyard after the program ended.

On the Palace Green costumed interpreters led children’s games, and the boys enjoyed an early from of baseball. Peter and I scurried over to the Wythe House for a quick look while they were busy playing. After a tour of the Governor’s Palace, where the boys were impressed with the musketry collection, we wandered through the gardens out back, eventually finding our way to the Hedge Maze. I can remember getting lost in this same maze when I visited Williamsburg as a child, and my kids found it just as challenging.

Nearby an interpreter dressed as Patrick Henry captivated an audience of onlookers. While the boys raced through the maze, I stood listening to Mr. Henry answer questions from the audience. The interpreter’s performance was astonishing, his knowledge of Patrick Henry’s life vast. I was particularly moved by his answer to a question about the well being of his wife, who apparently was mentally ill. As a fan of the Thomas Jefferson Hour on our local public radio station, I found Mr. Henry’s talk compelling and poignant.

We ended the day with a snack at Chowning’s, an authentic tavern that features period food. Chilled to the bone after waiting a half hour to get in, we hoped for a cozy fire to warm us up and instead found ourselves in a drafty room separate from the main dining area. Judging from the laughter and merriment in the main room, we wished we had been seated there. A couple of musicians finally strolled in and played a ditty, but overall it wasn’t the jovial tavern experience I envisioned.

Wear comfortable shoes when you visit Colonial Williamsburg because you’ll do a lot of walking. Shuttle buses are available, too, when the need arises.

OLD-WORLD GAMES
On Sunday we visited Jamestown Settlement, which celebrated Jamestown’s 400-year anniversary a few years ago. New galleries and special exhibits tell the dramatic story of the brave men and women who came to the New World and settled beside the James River.

Jamestown Settlement is very family friendly, especially if your kids are like mine and need room to roam. From the Powhatan Indian Village to James Fort, this attraction makes an effort to keep entertain kids.

Busy little Ross disappeared while we were listening to a Pocahontas look-alike talking about life in the Indian village. I found him poking around in a nearby yahakin, the grass shelter that served as housing for the Powatans. Next Ross found a tool for grinding corn and soon was hard at work making cornmeal. By the water we boarded a replica of the Susan Constant, the largest of the three boats that sailed from England to our Virginia shore over four hundred years ago.

Back on land we entered James Fort, which hides behind a triangular wooden palisade. Inside, wattle-and-daub structures with thatched roofs made us feel as though we were transported in time. Ross and his brother, Jasper, tried on English armor while Scott, my oldest son, watched a blacksmith forging iron. Then the three boys played a 17th-century game that involved throwing corncobs with feathers attached through vine hoops. It was “kinda fun” but not quite as thrilling as video games, they decided.

That afternoon we lunched at the Gabriel Archer Tavern at Williamsburg Winery, a cozy restaurant in a bucolic setting just three miles from Colonial Williamsburg. As sunlight streamed in the windows, the five of us sat at a large wooden table and studied the menu choices. I chose a luscious plate of smoked salmon with French bread, onions, capers, and a dill sauce, accompanied by a wonderful dry rosé. Peter and the boys had sandwiches and side salads, and we all shared a chocolate truffle mousse for dessert.

As we drove back home, I congratulated myself for planning a getaway that combined education and fun. Williamsburg’s kid-friendly attractions together with historic venues will definitely keep you and your family busy. Don’t forget to reward your efforts with a leisurely lunch at the Gabriel Archer Tavern and a bottle of wine or two for a souvenir. After all, we grown ups deserve to have some fun, too!