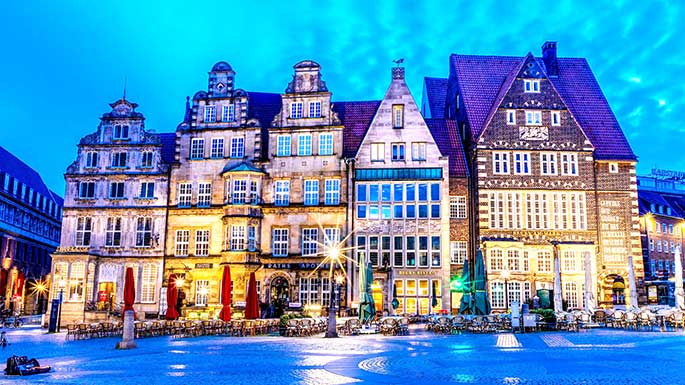 Getting to Know Germany

Peggy discovers the country of her ancestors.

I’m overlooking a beer garden, where men in lederhosen are dancing with smiling women in dirndls as happy German music plays in the background. A man carrying ten liters of beer—five mugs per hand—jostles past the dancers. My own beer tastes amazing.

I’m walking on a path through the woods when suddenly giant stone columns rise up before me 120 feet high. Beside them is a pond, where legend says, a beautiful woman jumped off the tallest rock and survived. A cool wind blows, and the primeval smells of the forest evoke the ancient wisdom of this place.

I’m sitting in a restaurant, and silently rolling toward me is a robot with flashing lights and googley eyes. It stops beside our table, turns slowly, and offers us the beverages we ordered—no tipping required.

I’m standing on a wharf surrounded by people, watching passengers board a big ship. The fog is thick, and in the distance seagulls cry mournfully. Our loved ones are heading to America, and we will never see them again.

Is this some crazy dream? Where am I? In Germany, of course. It’s the country of my heritage, and yet I have barely scratched the surface of its many wonders. With a Dutch husband and a brother in Sweden, too often Germany was just in the way as we traveled back and forth. Then I reconnected with Grit, a high school exchange student I once worked with; and now Peter’s sister, Karin, lives in Germany, where the cost of living is cheaper than in the Netherlands. Finally I’m getting to know the country of my ancestors.

Peter and I are in the midst of an extended holiday in Europe, a long-awaited trip, postponed like so many trips during Covid. Once the coast was clear and we could travel, we decided to make this an extra-special sojourn. But traveling to Europe still requires planning, paperwork, and Covid tests. Requirements for each country varies and constantly changes, so it’s important to keep up with what’s current. Other than that, it’s a great time to visit Europe as tourists are fewer and prices are lower. So let’s explore some of the Old Country. 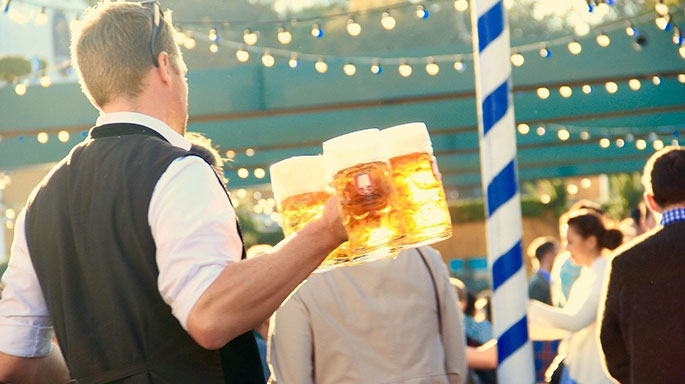 October in Germany means Oktoberfest, of course. Peter and I visited Grit and her husband, Jens, in their lovely home in the countryside north of Bremen. Our visit coincided with Bremen’s Freimarket, one of Germany’s oldest markets, which was first held in 1035. Originally, the market’s purpose was to trade goods, but in recent years it’s evolved into a much-loved carnival with all the colorful lights, thrilling rides, games of skill and chance, and throngs of happy folks, who were especially glad to attend since the event was canceled last year.

In the beer gardens, merry making was in full swing. A DJ got the crowd singing, clapping, and dancing with occasional pauses for Ein, Zwei, Drei, G’suffa (German for chug). German drinking songs are happy and upbeat, and everyone seemed to know the words. I loved watching the dancing, but the best part was seeing everyone smiling and enjoying themselves.

Grit was also anxious to show us a new museum in Bremerhaven called the German Emigration Center, which includes exhibits related to both immigration and emigration. The first half of the museum focuses on the more than seven million emigrants, who left from Bremerhaven between 1830-1974 on their journey to the New World. From the wharf to the less-than-ideal traveling conditions on board the ships to the immigrants’ arrival in their new home land, visitors can relive these life-changing journeys.

You can also learn about people who have moved to Germany, including recent refugees from countries like Syria and Afghanistan. Thoughtful interactive centers invite visitors to consider questions about race, religion, and prejudice. Computer stations in the final exhibit offer patrons the chance to look up their own family genealogy. I traced some of my ancestors back to the 1700s and discovered they came from an area of Germany near the Alsace region of France. Seeing my family tree makes me realize how connected we all are: to Europe, to the past, and to each other. 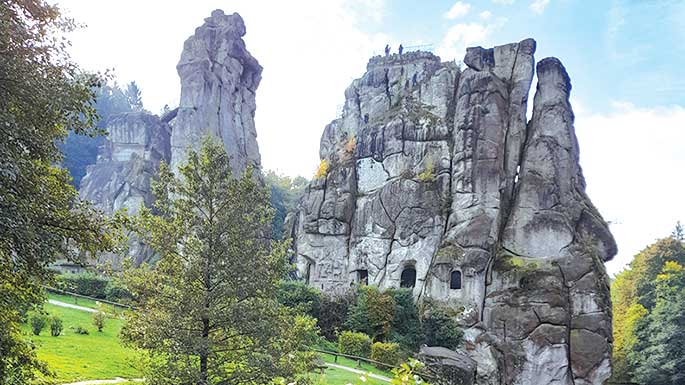 Another city we visited in Germany was Paderborn, home of a huge Romanesque Cathedral as well as the largest computer museum in the world. But first, we wanted to see the mysterious stone monoliths a few miles to the north. Called the Externsteine, the 120-feet tall sandstone rocks were forced upward by earth’s moving tectonic plates about 80 million years ago.

Experts believe it was used as a pagan worship site in the Dark Ages, but more recent Christian activity has been identified at the site, including grottoes and a monumental relief carved into the side of a rock, depicting Jesus being removed from the cross by Joseph and Nicodemus. Called the Descent of the Cross, it dates to around the 12th century.

Located in a 300-acre lush natural reserve, the Externsteine is a popular attraction, drawing more than half a million visitors per year. Trails criss-cross the reserve including one for pilgrims leading to the Campostella de Santiago trail in Spain. The day we visited was cloudy and rainy, but there was something magical about the rocks, a sense of energy that both Karin and I could feel.

Energy of a different kind awaited at the Heinz Nixdorf MuseumsForum (HNF), the world’s largest computer museum, named after a German computer pioneer. It presents a fascinating journey through time—from solving prehistoric math equations to counting with an abacus to inventing the first computers. Lots of interactive exhibits kept us busy, including one in which your photo could somehow become part of a painting. We saw an early model of an electric bike, an enigma machine, and robots of all sizes and shapes.

Our first night in Paderborn, we met the googley-eyed robot in an American-style restaurant called the Road House, which specialized in hamburgers and ribs. The food was ho-hum. But the second night we dined in a traditional German restaurant called Deutsches Haus. The food was amazing: crispy pork schnitzels with yummy potatoes and delicious sauces. The atmosphere—think lots of wood—was cozy, and our server was the best. Be forewarned, however, German food is hearty and portions are huge. You’ll definitely walk away with a full tummy.

Come along next month as we continue our journey in Europe on a Danube River Cruise with Emerald Cruises. For more information, visit www.emeraldcruises.com.