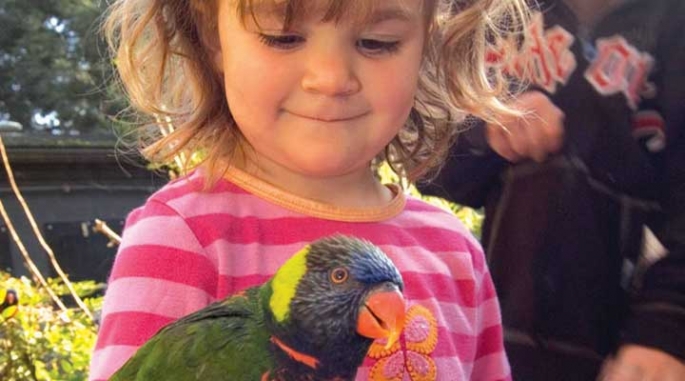 It was getting dark. After taking the scenic route (i.e., the twice-as-long way), Peter, the boys, and I were growing weary of riding in our “full-size” rental car. But the interstate was hours away, so we had no choice but to continue meandering along back roads through Washington en route to Portland, Oregon.

After a brief stop on the north side of Mt. Ranier for a clear view of the snow-capped mountain and a short hike, we headed toward Mount St. Helen’s, a hundred or so miles to the south, hoping to get there before dark and have a look around. Now we found ourselves staring at a sign that pointed west toward Windy Ridge Viewpoint 20 miles out of the way. Hmmm, we debated, maybe we can get a decent view of the volcano if we just keep going on the main road. On the other hand, Peter said, as long as we’re here, shouldn’t we go see Mount St. Helen’s up close? We turned west toward the setting sun and never regretted our decision.

As we followed winding roads, lush old-growth forests morphed into a desolate moonscape. Fallen trees blanketed the sides of hills as though a giant had walked along and flattened them. Only a few blackened trunks stood upright in places, stark reminders of the fury that shook the earth in 1980 when Mount St. Helen’s erupted one spring morning, spewing forth fountains of hot lava that scorched everything in its path.

As we drove higher, the desolation stretched in every direction as far as we could see. Finally, cresting one last hill, we faced Mount St. Helen’s, a huge, lopsided beast: gray and bleak but somehow majestic and serene. Below us Spirit Lake sparkled in the waning sunlight, fallen tree trunks floating along its edges.

Only one other car shared the parking lot with us, and it departed soon after we arrived, leaving us alone in this wondrous, silent landscape. At the top of a hill the wind nearly blew us away, but it was worth the climb. Here we discovered an unforgettable view of the lake and the volcano glowing in the sunset. The five of us stood there, wind whipping our hair, and marveled at the power of nature and the beauty that shines through in even the bleakest places.

What amazed us most was how, after so many years, the landscape still appeared so lifeless. Beneath our feet, however, colorful wildflowers took root in the crumbly lava, and in places, young trees bravely grew. Park officials say big horn elk and bald eagles are returning to the area. Some day Mount St. Helen’s and environs will be lush again—but not for a long time.

Meanwhile, if you’re anywhere near, take the time to see Mount St. Helen’s up close. Although the visitor’s centers are found at the western side of the park, I recommend the eastern lookout, especially at sunset when the sky is pink and the sun sparkles on Spirit Lake.

Portland greeted us with a parking ticket our first night as we unpacked our car in front of the Mark Spencer Hotel downtown. While it’s not a happy way to meet a city, we understood why the sign said no stopping or parking the next day when one of the city’s public trams came barreling around the corner on a collision course with any car that might be in the spot where we had innocently parked the night before. We shrugged off the ticket, and after a good night’s sleep in our roomy suite (with kitchen facilities and two TVs), we embarked on a whirlwind tour of Portland.

Our first stop almost became our last. Billed as the largest bookstore in the world, Powell’s is a place to get lost in for hours. If it hadn’t been for the kids, who typically are not crazy about bookstores, we might never have left. This place was phenomenal. Every book on every subject you could think of and plenty you’ve never even dreamed of crowded shelves, calling out to bibliophiles, “Read me! Take me home.”

Unfortunately—or fortunately, depending on how you look at it—I had to resist their charms because lugging heavy books home in my suitcase was not a priority. Besides I had to save room for a bottle or two of West Coast wine. I mean, let’s keep our priorities straight here.

From Powell’s we hopped in the car, equipped with a picnic lunch, and headed to Washington Park, a sprawling oasis of greenery west of the city, where a number of Portland’s attractions can be found. It was the 4th of July so the park was brimming with folks enjoying the fabulous summer weather. It was hot, actually, and after exploring the International Rose Garden, where hundreds of varieties of colorful roses bloomed under the sun, we found a shady spot to enjoy our picnic lunch.

Afterwards, the tranquil Japanese Gardens offered cool shade as we strolled along tree-lined paths, admiring ponds and stone gardens and simple wooden structures used for formal teas and religious ceremonies. I got lost in a fabulous patch of blue irises that made me feel I was in a painting by van Gogh. Ross loved the koi swimming around, huge multi-colored fish that inhabit the tidy ponds throughout the gardens.

That afternoon we visited the Oregon Zoo, also in Washington Park. Animals from all corners of the world live in the zoo, including Asian elephants, Peruvian penguins, and Arctic polar bears. My kids loved the lorikeet exhibit. In an enclosed aviary, the large colorful birds perched on the boys’ arms and drank nectar from small paper cups. Ross grinned ear to ear when the bird landed on his arm.

Another up-close encounter took place at a reptilian exhibit, where the boys enjoyed touching a boa constrictor. The smiling teen volunteers who manned the exhibits shared information about the animals in a friendly, engaging way. While the zoo itself was worthwhile, I’d skip the train next time. It was a thirty-minute ride through the woods with no animals to be seen. For some, I guess, the novelty of riding a train is sufficient, but for us, not so much.

After a quick stop for groceries, we made dinner in our kitchenette at the Mark Spencer Hotel and then walked a couple blocks to the riverside for Portland’s Independence Day celebration, a highlight of our trip. There was a small-town feel to the celebration. From toddlers to retirees, the hodge-podge of humanity that gathered at Waterfront Park was civilized, friendly, and very patriotic. Before the big fireworks display began, hokey little fireworks went off all around us, much to my sons’ delight. The boys loved all the flaring and glaring, the whistles, pops, and bangs, the sizzles and fizzles all around us.

Then the big show began, and what a show it was. Above the Willamette River colorful designs, transforming shapes, and brilliant bursts kept us on the tips of our toes for what seemed like an hour. Earlier we had considered driving to a nearby city that advertised itself as having the biggest fireworks display on the West Coast, but we were so glad we didn’t. Portland’s downtown celebration was perfect in every way, especially at evening’s end when we walked back to our hotel, tired but happy, avoiding the traffic snarls that filled the streets.

The famous explorers, Merriwether Lewis and William Clark, passed by Portland on their westward quest, and opportunities for history lessons abound. We didn’t have enough time to explore the Lewis and Clark Trail and had to content ourselves with a scenic drive along the Historic Columbia River Highway, a picturesque winding road that overlooks the Columbia River Gorge. To the east we could see Mt.  Hood towering more than 11,000 feet high. The boys were thrilled to learn Mt.  Hood offers skiing and snowboarding even in the summer, but we were too far away to fit in a visit. Next time, I told them, and I meant it. Oregon is definitely worth a second visit, a longer, lingering one.

Peter and I even managed a date night during our stay in Portland. One evening around sunset we took our cocktails and snacks up to the rooftop garden of our hotel while the kids watched TV in the room. It was windy up there, but the sun was warm, and we enjoyed a different perspective of Portland.

Later, after fixing dinner for the boys, Peter and I went out on the town. We walked around looking for a restaurant that would fit our mood and our budget and ended up at a tavern called Red Star. We dined on a wonderful dungeness crab and smoked salmon cake, which came with an orange, watercress, and fennel salad. Tasty food, crisp Oregon white wine for me, a micro-brew for Peter, and a cozy atmosphere complete with mellow jazz playing—all combined to make it a heavenly evening, just what Peter and I needed to recharge our batteries for the next leg of our trip: a few hundred miles down the California coast to San Francisco.