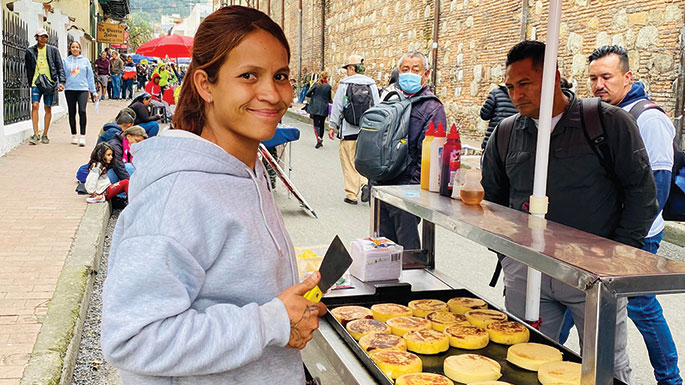 Discover the Magic of Colombia

From its jungles to beaches, Colombia attracts adventurers of all ages.

Colorful lights dispel the darkness as I walk through a large tunnel 600 feet beneath the city of Zipaquira, Colombia, not far from the capital city, Bogota.

Soon a breathtaking scene opens up before me: the awe-inspiring Salt Cathedral built underground in 1995 in what used to be a salt mine. The only subterranean temple in the world, this architectural and engineering jewel attracts nearly 600,000 visitors annually from around the globe.

Tonight is the final night of a writers’ conference I’ve been attending in Bogota, and we’re in this underground cavern to party. Our group enjoys music and theatre performances, drinks, and tasty appetizers, all while marveling at the extraordinary surroundings.

My weeklong visit to Bogota and environs has been eye-opening in many ways. Like most South American countries, Colombia has a checkered history, and safety is still a concern. However, like most travelers, I follow common-sense safety rules, and during my stay, I never feel endangered or unsafe.

In fact, the Colombian people I meet are genuinely friendly and go out of their way to welcome guests to their country, recently named by Forbes as one of the top three most beautiful in the world. Known for its diverse landscapes—jungles, beaches, and mountains, Colombia has long attracted adventurous travelers, and after my week here, I can see why. Come along with me and let’s explore this magical country.

In the Picturesque Region of Boyaca

Before the conference begins, I join a group of other writers for an excursion to Boyaca, a region about 100 miles northeast of Bogota. Known for its authentic artisanal crafts and ecotourism opportunities, I’m excited to see more of this beautiful country and meet some Colombians.

Our tour guide, Awad, welcomes us with a huge smile and friendly personality. When I tell him I’m almost out of my favorite cinnamon gum, he surprises me with a bag full of cinnamon Chiclets—remember those? Awad is excited about the future of tourism in Colombia, especially in places like Boyaca, rich in beauty and charm.

After driving through amazing scenery, we arrive at Villa Rouse, where we will participate in a cooking class. The owner explains that the cuisine of Colombia bridges the gap between past and present and unites the people of Colombia with their ancestors. Corn is an essential part of the cuisine, so we will make almojabanas, round corn rolls incorporated with fresh cheese, and tasty cookies, similar to sugar cookies but made with corn flour instead of wheat. Both are baked in an adobe oven and have a smoky flavor that a modern kitchen just can’t deliver.

In the nearby town of Gachantiva, we lunch at Restaurante Chagrativa, which celebrates traditional Colombian cuisine and sources ingredients from local farmers. The menu changes but always features healthy, organic, and delicious food. Our lunch is fresh local trout coated with cheese and bread crumbs, served atop a medley of veggies, potato, and rice. Yum!

Afterwards we meet Orlando and his wife, Alba, at their farm, Finca Primavera, in the countryside. The farm grows rare white mulberries, a superfood known for improving digestion, circulation, and metabolism. After picking and sampling a few tasty berries, we are welcomed into Alba’s workshop, where she makes handwoven hats using age-old techniques. Her hats are so intricate and beautiful—no wonder it takes her more than a week to make one.

Our busy day comes to an end at Hotel la Periquera near Villa de Leyva, a cozy property surrounded by mountains, rivers, and lush foliage. In the morning, we hike to a nearby waterfall and dip our toes in the brisk mountain water. Ecotourism is growing in the region, and hiking and rock climbing are among the adventure sports available.

Two lovely towns are on today’s itinerary: Raquira and Villa de Leyva, both oozing with charm. Raquira is known for its unique handicrafts—from pottery to colorful woven hammocks, a steal at $10 USD. After walking through town, we meet Doña Rosa Maria Jerez, a potter with a story. Her business, Las Otilias, specializes in clay statues of the Virgin Mary.

As a young girl, Rosa was inspired by a statue she saw in a church and told her mom she wanted to make religious icons out of clay. But her mom forbade her, telling Rosa she needed to make “useful pots.” The young girl persevered and, whenever she found time, began making churches and statues out of clay. Before long, her folk-art pottery became highly sought after.

As we listen to her story, translated by Awad, Rosa makes a clay mixture, which includes small bits of gravel for stability. She uses her bare feet to blend the clay and granite and invites volunteers to help. I can’t resist and join her in a funny, hoppy dance atop a mound of clay, enjoying the squishy mud oozing between my toes. Next Rosa demonstrates how to make a few pieces while we also try to work with the clay, much less skillfully.
Villa de Leyva is our last stop before returning to Bogota. In this charming colonial town with a huge square and lots of shops and restaurants, it feels like you are walking into Colombia’s past when you stroll along its cobblestoned streets.

Back in Bogota, we take a tour of the capital’s highlights. The city is a mixture of Spanish colonial heritage—think colorful homes with tile roofs and wrought-iron details—and modern office buildings and upscale restaurants. In the Bohemian neighborhood of La Candaleria, known as the heart of Bogota, historic mansions line the streets alongside trendy coffee shops, and everywhere you look are colorful murals.

Bogota’s Gold Museum, a must-see, has the largest collection of pre-Hispanic gold pieces in the world—over 34,000, made between 500 and 2000 years ago. As you learn about Colombian history, prepare to be dazzled by unique gold pieces—from masks to jewelry to ceremonial bowls, once used in ancient rituals and daily life.

Another popular spot for tourists is Bolivar Square, home to the Metropolitan Cathedral Basilica of Bogotá, the largest in Colombia, completed in 1837. Its interior is airy and unadorned. I’m impressed by the massive white stone columns that rise up to the heavens. Also on the square are government buildings, including a modern Palace of Justice and the National Capitol.

Overlooking the city, Montserrate Mountain towers over 10,000 feet high. A few intrepid writers climb up to the cathedral at the top, but since I’m already bothered by the altitude in Bogota, which has an elevation of 8600 feet, I decide to skip the hike.

Museo Botero is a museum devoted to the art collection of Fernando Botero, who donated 208 pieces of art (123 of his own works and 85 of international artists) to the Bank of the Republic. Housed in a former residence with a beautiful courtyard, the art is mesmerizing. If Botero’s name doesn’t ring a bell, one look at his signature larger-than-life subjects will jog your memory. From a rotund Mona Lisa to bulging ballerinas, you’ll get an eyeful of humanity, fleshy parts and all. Also on view are works by Picasso and a unique bust by Salvador Dali of a woman with a baguette balanced on her head.

A food tour is part of the fun. We start at the sprawling Paloquemao Fruit Market, so large that people need shopping carts. Every fruit and vegetable imaginable is for sale—plus meat, fish, herbs, and more. I buy freshly roasted Colombian coffee and can’t wait to try it once I’m back home.

From there we head to a boutique chocolate shop called Late Choco and meet the owner, Joel Palacios, who offers samples of his bars as well as the best brownies I’ve had in my life. Next is a cooking class at Escuela Taller de Bogota (Bogota Workshop School), whose mission is to ensure Colombia’s cultural traditions continue. We prepare empanadas as well as Colombia’s national dish, Ajiaco Santafereño, a soup with chicken, corn, potatoes, and capers. Somehow after all that food, I still have to eat dinner!

The writers’ conference is a whirlwind, and before I know it, I’m deep underground in the Salt Cathedral, toasting to our new incoming president, a friend from Boston whom I met years ago when I began my side gig as a freelance travel writer. Since then, I’ve visited many exotic places and written for some fabulous magazines, but I’ve learned the best part of traveling is always coming home.