Going with the flow when things don’t go your way.

The trip started out perfectly. Peter and I caught a ride to Annapolis with our son to join friends Dave and Maureen on their boat in Annapolis Yacht Basin. They’d been traveling for 45 days on a journey from Hampton to Maine and back on their 39-foot Mainship trawler, Irish Mist, accompanied by their cute-as-a-button, Shih Tzu, Riley. The bucket-list voyage had had its share of ups and downs, but Dave and Maureen were excited to welcome us for the last leg: a four-day cruise down the Chesapeake with stops at favorite marinas, where glistening pools and tiki bars awaited.

First, we planned to spend a couple days exploring Annapolis, enjoying its friendly vibe, outdoor music, shopping, and restaurants. We talked excitedly about our plans at an Irish pub, where we grabbed lunch, and then set out to visit the U.S. Naval Academy, which my dad attended.

On our walk there, Dave suddenly said he felt tired and wanted to go back to the boat and rest. It was a hot summer afternoon, and he didn’t look well. In fact, ever since we arrived, Dave hadn’t been his usual jolly self. Maureen ordered a ride, and Peter offered to accompany Dave back to the marina.

Standing on the sidewalk outside the gates of the Naval Academy, I took a closer look at Dave, who was clearly short of breath, and said, “I think you should go see a doctor.” Much to Maureen’s surprise, Dave agreed. She’d noticed he’d been acting a little odd lately and had asked him if he was feeling OK. Like a lot of people—guys, especially—Dave didn’t want to admit he wasn’t feeling well, especially this close to the end of their adventure.

So Maureen and Dave took off to an urgent care center, and within an hour Maureen texted me, saying they had done an EKG and were being sent to Arundel Medical Center. Next text: Dave’s being admitted. Next text: Dave needs a pacemaker. Yikes!

Fortunately, Dave was in the perfect place to receive emergency care. Imagine if he’d had an incident while offshore or hours from the nearest city. So even though our trip didn’t quite turn out as planned, we were thankful that Dave was well taken care of. In fact, he was only in the hospital two days and was able to cruise with us to Hampton. How perfect that Peter and I were on board and able to help Dave and Maureen get their boat home.

There’s an upside to slowing down, we discovered, and lessons to be learned—like accepting the things we can’t change with grace and good humor. Come along on our adventure on the Chesapeake as we learned how to go with the flow. 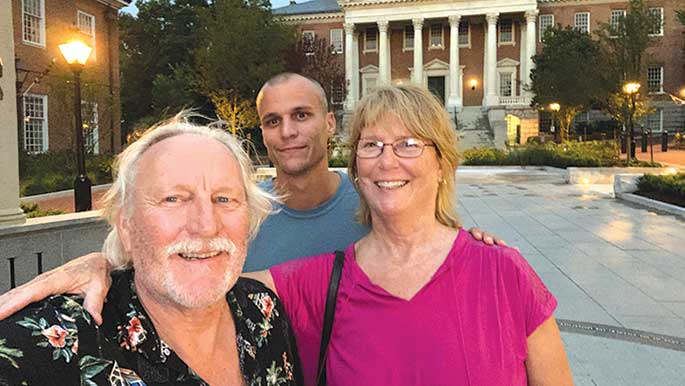 Peter and I had arrived in Annapolis a day before Dave and Maureen and spent our first day relaxing and getting reacquainted with this cozy city. We stayed at the Westin Annapolis, a charming property about a 15-minute walk from the City Dock. Our comfy room had a nice view, and we loved the elegant vibe and the indoor pool. Annapolis’ historic streets are perfect for strolling, and the variety of restaurants is amazing for such a small town. Most nights street musicians perform, so there’s lots to see, eat, and do in Annapolis.

Saturday we joined Dave and Maureen for happy hour on the Irish Mist and decided to have dinner on the boat instead of going out to eat. Our slip was next to the Annapolis Yacht Club, so the waterfront area provided constant entertainment. Dave went to lay down before dinner was ready—not normal behavior for Dave, who loves to eat, so after we dined with Maureen, Peter and I decided to head back to our hotel.

Sunday we moved our things onto the boat and looked forward to beginning our voyage south the next day. Then the proverbial sh*t hit the fan. While Dave was being treated by the good doctors and nurses at Arundel, Maureen stayed by his side, which meant Peter and I had time to do more exploring. We finally got to visit the Naval Academy, and our first stop was the columbarium, where my dad’s ashes are interred, located in a beautiful spot overlooking the USNA campus and a peaceful lake.

The last time I was there 17 years ago, our family gathered to say farewell to my dad. My kids were younger, and I remember Ross, who was 8 years old at the time, making a rubbing of my dad’s name etched in marble using crayons and paper. He got some crayon on the marble, and I remember my dad’s wife, Marilyn, being a little unhappy about the crayon marks. I looked to see if any of the crayon remained years later, and of course it’s gone, faded like the memories of my dad and all the loved ones we’ve known and lost. Even though Dad isn’t here on earth any more, I felt close to him in his final resting place.

It was Plebe Parents’ Weekend, so all over campus and the city of Annapolis, Plebes (or freshmen) wearing starched white uniforms walked beside their proud parents, ready to take on the world and all it has to offer. These remarkable kids are the future of our country, and seeing them strolling confidently with their families was inspiring.

On campus, Peter and I stumbled upon the U.S. Naval Academy Museum. What a treasure trove of artifacts and exhibits showing the Navy’s history during war and peace. The museum also features a valuable exhibit of model ships collected by Colonel Henry Huddleston Rogers, many of which feature authentic rigging, miniscule details, and incredible workmanship. In one area, you can view “bone” ships made by French prisoners, using pieces of bone, leftovers from their meals, along with other everyday objects they painstakingly fashioned into exquisite reproductions of ships.

We also stopped in to admire the U.S. Naval Academy Chapel, its domed roof reminiscent of the Duomo in Florence My parents were married in the small chapel underneath called St. Andrew’s Chapel. Somewhere is a photo of them leaving the chapel under a saber arch, swords raised in salute by my dad’s fellow midshipmen. Remembering my parents and walking in their footsteps at the Naval Academy was a poignant reminder of the passing of time. Yet seeing the Class of 2025 with their crisp white hats and gleaming white shoes reminded me that life does go on.

Magical Moments on the Bay 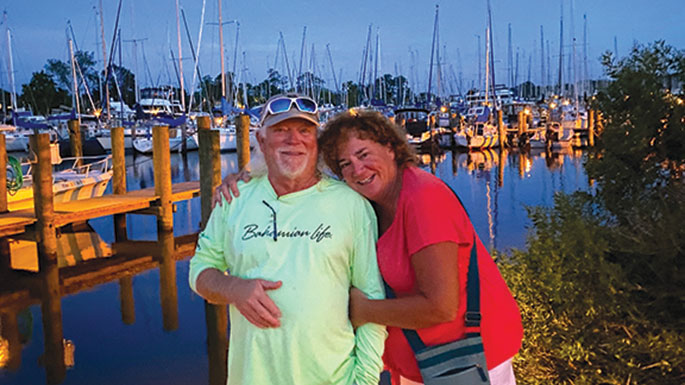 Tuesday Dave was released from the hospital, so our voyage could commence. He looked much better now that oxygen was flowing properly through his veins. But doctor’s orders were to take it easy, not to lift anything heavy, and avoid raising his left arm. Peter has some experience piloting a boat, so with Dave’s help, we were soon out of the slip and headed to Herrington Harbour about a two-hour cruise away.

Peter and I had already experienced a couple stormy nights in the slip while Dave was in the hospital. On Tuesday, as we motored toward the marina, winds were out of the south about 10-15 knots. Bands from Tropical Storm Fred churned up the bay, so we were glad to get to Herrington Harbour since conditions began to worsen. Bye-bye, blue-sky and hello gusty winds, clouds, and rain.

Actually, we had time for a quick dip in the pool and a cookout before the weather really deteriorated. That night in the boat with an east wind blowing us hard against the T-head where we were docked, I barely slept a wink. The sound of the gurgling water combined with the moaning wind and the squeaking rubber bumpers made me feel uneasy even though I knew we were safe from the elements in our berths in Irish Mist.

The next day more turbulent weather was in the forecast, so Capt. Dave said we’d stay put. No problem. One look at the wind and the waves and you knew going out in those conditions would be crazy. In between thunderstorms, we swam in the pool and lazed in the sun. I even got some work done in the comfy air-conditioned lounge. That night Dave and Maureen took us out for dinner at Dockside, a seafood restaurant adjacent to the marina. Our favorites were the oysters on the half shell, shucked by a local fellow named Kenny who loved to tell a story or two.

Thursday was our long-haul day, cruising to Deltaville—about a 10-hour voyage. The weather was perfect, and we made good time. A sparkling pool greeted us, and we were happy to cool off after a hot day on the boat. Soon my son Jasper pulled in to the marina with his friend, Elena, to pick me up—deadline was calling. Peter helped bring the boat to Hampton on Friday, and the journey was completed.

You know the old saying: Life’s a journey, not a destination. This trip reminded us that we are most definitely not in control. The more stressed we get when things don’t go our way, the less likely we are to appreciate the magical moments that play out in front of us—if only we take the time to see them.

Like the osprey mom and dad who called to each other at day’s end as one flew to find food and the other tended the hatchlings. Or the way the moon reflected in the glassy waters of the Bay. Or the smell of the salty sea air in the morning when you wake up early and sip your coffee on the bridge. It’s moments like these that should be treasured—along with deep appreciation for good health and good friends.

For more information, go to www.visitannapolis.org