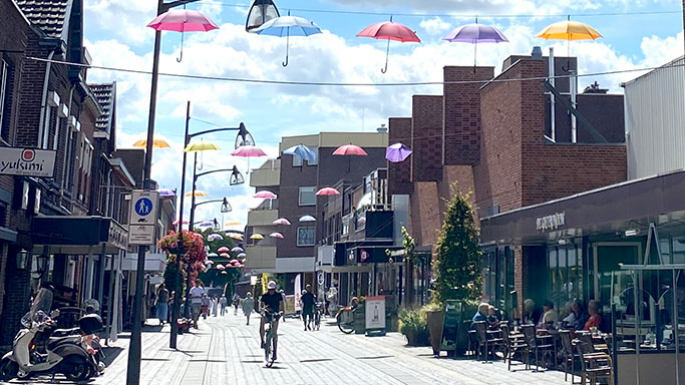 Tegelen, a Dutch town near the Maas River, decorates its shopping street with colorful umbrellas. Photo by P. Sijswerda
2022 Sep

Join Peggy and Peter as they bike through the Veluwe in the heart of Holland.

There’s something about riding a bicycle that brings out your inner child. Sure, going up hills can be a challenge, but a free-wheelin’ reward awaits at the top! Hold on tight and let gravity take over as you breeze down the hill, the wind whipping your hair and the sun lighting up your smile. Wheeee!

Peter and I are spending the summer camping in Netherlands and are excited about buying new bicycles. We opt for pedal-powered bikes versus electric since both of us can use the exercise. Plus it’s pretty flat in this small country, where there are more bikes than people. Even better, there are miles and miles (20,000, in fact) of bike paths, many of which meander through gorgeous countryside dotted with windmills, canals, cows, and picturesque villages.

One area we want to explore is the Veluwe region in the center of the Netherlands. It’s home to De Hoge Veluwe National Park, which translates roughly to the High Fallow Lands, a beautiful region full of drifting sand dunes, many blanketed with forests, grasses, and heath. Beautiful in every season, it’s especially lovely in fall when the heath explodes into a spectacular violet carpet.

During the 40 or so years since we met, Peter and I have visited almost every corner of the Netherlands except this area. After doing some research, we choose to stay in EuroParcs De Wije Werelt, which means the Wide World, a bungalow park which offers a variety of comfortable lodgings as well as campsites. We’re ready to take a break from camping and book a cute bungalow for a few nights. We can’t wait to explore the Veluwe on two wheels.

Bungalow parks are, in my opinion, the best-kept secret for vacationers in the Netherlands seeking comfy, affordable accommodations. There are many parks, but we’ve found the EuroParcs’ brand offers some of the best.

When in Amsterdam, we love staying in EuroParcs’ Poort Van Amsterdam, a peaceful haven just ten miles or so from the capital city. We also enjoyed our stay this summer in EuroParcs’ Maasduinen in North Limburg, where we cycled along the Maas River and swam in a relaxing lake.

De Wije Werelt offers a variety of different types of bungalows, including tiny houses, treehouses, nature lodges, glamping tents, and luxurious villas. We stay in a mid-range bungalow called the Velthorst, which is spacious, comfortable, and equipped with every modern convenience.

Some of the bungalows offer chic-rustic decor, including the treehouses and nature lodges. For example, one called the Van Gogh sleeps four (two in the living room and two in a loft). It’s very compact, but inside you’ll find a coffeemaker, TV, and everything you need to feel at home. Another called Nature Lodge 6 sleeps six and has custom wood furniture. The nature lodges are grouped in a serene, natural area, and each comes with outdoor furniture, as do all the bungalows in the park.

I meet with Richard, the manager of De Wije Werelt, and Ron, EuroParcs’ communications advisor and press spokesman, to learn more about the brand, its vision, and mission. “All of our parks are in desirable locations,” says Ron. “Nature is very important.”

The company owns more than 60 parks in Europe from the Netherlands to Austria, as well as two parks in Bonaire in the Netherlands Antilles. Their goal is to become the largest provider of bungalow parks in the world, and they’re planning to develop more parks in Belgium, Luxembourg, and Germany, as well as expand into Croatia and Slovenia.

EuroParcs’ business model involves selling vacation homes to private individuals, who can choose to place them in the rental inventory as much or as little as they like. “We offer a variety of types of accommodations at different prices,” Ron explains. “We like having all kinds of different people. That’s why we have tiny houses and solo retreats, for example—to attract young people.”

Not far from De Wije Werelt is another EuroParcs’ community called De Zanding, which we tour one day. Ron shows us some of the newer models of homes as well as a small private home called the Solo Retreat, ideal for someone who wants to get away from the busy-ness of life for a while.

De Zanding also offers Tiny Offices, which EuroParcs describes as “the first step towards the recreation and work of the future.” As the boundary between leisure and work becomes less defined, Ron explains, these offices allow vacationers to work undisturbed or perhaps discover inspiration for a new project.

Both parks offer many amenities for families: restaurants, swimming pools, activities, playgrounds, bike rentals, and much more. The company also prides itself on its green initiatives, and every EuroParc property promotes recycling, uses sustainable building materials, and implements other measures to reduce environmental impact. Besides partnering with local charities, they also support a foundation called the Esther Vergeer Foundation, which makes it possible for children and young adults with physical disabilities to play on sports teams.

at the Kröller-Müller Museum in Otterlo

Our stay in De Wije Werelt coincides with a heat wave in the Netherlands. Normally, Northern Europe has fantastic summer weather: warm days, cool nights, low humidity, and only occasional rain showers. The day after we arrive, temps soar into the high 90s, so we decide it’s a good day to explore the 13,000-acre national park nearby in the comfort of our air-conditioned car.

Known for its beautiful flora and fauna, De Hoge Veluwe National Park is home to a variety of animal species including birds, wild boar, deer, and mouflon, a wild sheep with curved horns. In the heat of the day, we only spot one deer. The rest of the animals are hiding from the sun, we decide.

Time for us to hide from the sun, too, so we head to the Kröller-Müller Museum, a world-class museum in the park with a huge collection of modern art, including many paintings by Van Gogh. For a Van Gogh fan like me, it’s a must-see.

The museum was the brainchild of Helene Kröller-Müller, who collected art from 1907 to 1922. Meanwhile, her husband began buying parcels of hunting land, most of which eventually became De Hoge Veluwe National Park. Today a foundation owns the museum while another foundation owns the park and the Kröller-Müller’s home, a striking country residence called the Jachthuis Sint Hubertus, also a museum.

There’s a lot to see and explore in the park, but Peter and I are most interested in visiting the museum and seeing the Van Goghs. The Kröller-Müller Museum is home to the second largest collection of Van Goghs—88 paintings and 180 works on paper. Here you can view “The Potato Eaters,” which Van Gogh painted in dark colors reminiscent of “the color of a really dusty potato, unpeeled of course,” he wrote in a letter to his brother, Theo.

One of my favorites, “Terrace of a Café at Night,” depicts a stark blue sky dotted with stars as the backdrop for a warmly lit yellow café. The list of “wow” paintings at Kröller-Müller would take up the rest of this article, so I’ll just say, if you’re a Van Gogh fan and have the chance to see this museum: Don’t. Miss. It.

Our favorite thing to do while we stay at De Wije Werelt is to hop on our bikes and explore a new bike path. While many of the Netherlands’ bike paths parallel roads and even have their own traffic lights, many wind through forests and along less-traveled country lanes.

This means, of course, you can leave cars and traffic noise behind and go deep into nature. De Hoge Veluwe National Park offers miles of trails for riding, but you can also find beautiful bike paths in the nature preserve adjacent to De Wije Werelt called Planken Wambuis.

Peter and I ride through old-growth forests, across golden meadows, and past rippling sand dunes, exploring a variety of landscapes. Here and there we dismount and walk to overlooks, where we can see for miles across the dunes and forest canopy. The weather has cooled a bit, but the sun warms us as we cross open areas. Cycling is easy and fun on the well-maintained paved bike paths.

In the middle of nowhere it seems, we ride into a painting: a thatched roof farmhouse and a lovely café in a pastoral setting, where cyclists of all ages stop for coffee, ice cream, cold beer, or a snack. We are enchanted—and thirsty, so can’t believe our luck.

The farm is called Boerderij (Farm) Mossel and dates to 1863. Turns out the name has nothing to do with shellfish and instead refers to moss. The farmhouse is available to rent to groups, and I can’t think of a more beautiful place to have a family gathering. Even their website says, “Do you remember the sound of silence?”

That’s what I remember most about our visit to the Veluwe: how quiet everything was. Sitting in the yard of our bungalow, the only sound I heard in the morning was the breath of a horse being exercised on a track not far from where I sat—or the sound of doves cooing in the trees.

In the Kröller-Muller Museum as we walked around the outdoor sculpture park, I heard the wind rustling the leaves high up in the trees. Inside as we viewed the art collection, everyone seemed lost in quiet contemplation, immersed in Van Gogh’s creative vision.

In De Hoge Veluwe National Park, we stopped to view a lone deer in the woods. It was completely quiet until the deer scampered away. Then the quiet returned.

Taking time to connect with nature, to listen to its quiet breathing, is what vacations are all about. It’s not always peaceful everywhere you go, but for me, silence is worth seeking out. And when you find it, stop, listen, and savor it.