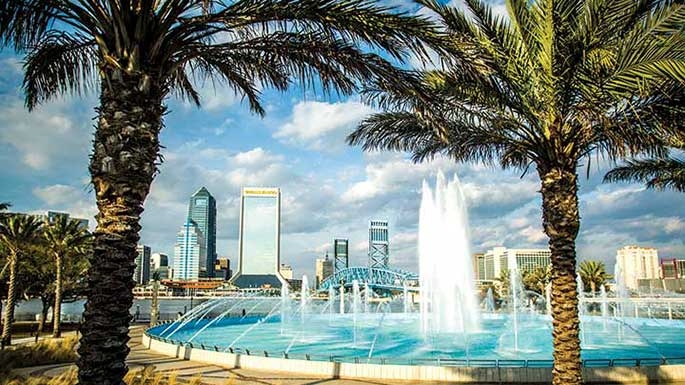 Whether it’s history or nature or entertainment, your family with love Jacksonville and the Beaches.

Florida. The very name conjures up images of sparkling water, sandy beaches, theme parks, and palm trees silhouetted against colorful sunsets. In fact, Florida has all that to offer visitors, but there’s more to Florida than sun worshipping and fun seeking. Florida’s role in our country’s history, while often overlooked, is worth exploring. The perfect place to begin your journey into Florida’s past is the Northeast region, also known as Jacksonville and the Beaches.

Learn about History at Kingsley Plantation

Northeastern Florida is rich in natural beauty. Thanks to farsighted planning, thousands of acres in the area have been set aside as wildlife habitat, offering visitors the opportunity to view Florida the way it appeared to Ponce de Leon when he first stepped onto Florida’s shores in 1513 and claimed it for Spain.

The Timicuan Ecological and Historical Preserve boasts 46,000 acres and offers outdoor enthusiasts fabulous bird watching opportunities. Kayaking and canoeing the saltwater marshlands provide the best means for viewing nature, but you can also explore the preserve easily by car.

After a short ferry ride across the St. John’s River, we followed a long, winding road to Kingsley Plantation, a peaceful oasis on Fort George Island overlooking marsh and winding waterways. Once owned by Zephaniah Kingsley, a wealthy businessman, the historical site features the oldest remaining plantation home in Florida.

What makes this property unique is the story it tells about freedom and slavery in plantation-era Florida. Kingsley ran the plantation with his African wife, Anna, whom he’d originally purchased as a slave in Cuba and then freed. Together they had four children, and Anna helped run the plantation, which produced Sea Island cotton, citrus, sugar cane, and corn.

Peter and I, along with our three sons, visited the plantation on a sunny December day and enjoyed exploring the plantation and learning its fascinating story. Besides the restored plantation home, which features historical exhibits, there are also ruins of 23 slave cabins. I found it interesting that Anna, a former slave herself, ended up owning slaves. Scott, Jasper, and Ross seemed to enjoy climbing the massive live oak trees that dotted the property more than learning about the history of the plantation. Go figure.

Soon the boys had another chance to climb trees. We stopped in one of the picturesque state parks found along the barrier islands north of Jacksonville. On Big Talbot and Little Talbot Islands well-maintained state parks offer hiking, swimming, camping, and boating.

On one of the beaches, we came across the largest driftwood we’ve ever seen. Whole trees—roots and all—lay scattered along the shore, just begging for kids to climb on them and then jump off, which ours gladly did. One thing I’ve learned as a parent: never let an opportunity slip by to let kids get their ya-ya’s out. Another lesson: you can spend a lot on family activities, but the simple, serendipitous ones are often the most memorable.

Kids Love Ripley’s Believe It or Not

Don’t miss a visit to Castillo de San Marcos National Monument in St. Augustine just a short drive down the coast. My family has visited St. Augustine before, and we just love this cozy city. This time we got to know its history a little better, thanks to a tour of this 300-year-old fort perched beside Matanzas Bay. The fort changed hands numerous times throughout its history. It was designed and built by the Spanish, who ruled La Florida from 1513 until 1763. Then the British took over Florida but returned it to Spain in 1783. Florida became an American possession in 1821 and a state in 1845.

Today, our tour guide told us, the site draws thousands of visitors each month. He also made a point of saying that, while Virginia thinks it has the distinction of being home to the oldest permanent settlement in the New World, the truth is St. Augustine is older than Jamestown by about 40 years. The difference is Jamestown was the first English-speaking colony whereas the Spanish settled St. Augustine.

The day we visited turned out to be a rainy one. The clouds grew thicker during our tour of the Castillo, after which we managed a quick stroll through the historic area before the heavens opened up.

The rain didn’t bother the kids because we’d promised them a visit to Ripley’s Believe It Or Not Museum if it rained. Neither Peter nor I were too excited about visiting Ripley’s, so we let Scott, our oldest, take Jasper and Ross in while we read magazines in the car.

The boys came out after an hour or so, bubbling over with enthusiasm about the oddities they’d seen. Ross exclaimed over “an eight-foot tall guy. My face was as big as his hand!” Jasper liked a bridge made out of matches, and Scott told us about the spy camera inside a beer can. While admission to Ripley’s is a bit expensive, the boys really enjoyed their visit.

Try for a Hole in One at Adventure Landing

The city of Jacksonville has its share of tourist attractions, including the Museum of Science and History, which also features exhibits on Florida’s past. My family and I showed up at the front steps of MOSH on Dec. 24 only to discover it was closed. Drats!

Instead we decided to walk along the St. John’s River, a nicely planned area called Southbank Riverwalk, which offers fabulous views of the Downtown skyline and is also the setting for Friendship Fountain, one of the world’s highest spraying fountains. Boat taxis shuttle across the river toward the Jacksonville Landing, where opportunities for shopping and dining abound.

On the eastern edge of town lies the TIAA Bank Field, home of the Jacksonville Jaguars. Our visit coincided with a game between the Jaguars and the Tennessee Titans, so we spent a warm, sunny afternoon watching football. Much to the crowd’s dismay, the Jaguars lost 28-13. It was our first pro-football game, and even Jasper, the family sport nut, wasn’t too impressed. “I didn’t really care about either team,” he said. Caring who wins is an important ingredient in watching sports, we decided. Otherwise, it’s just a silly game.

Another historic place we visited was the Alhambra Dinner Theatre, which is the oldest dinner theatre in operation in the U.S. We enjoyed an adaptation a charming musical adaptation of Dickens’ “A Christmas Carol.” The talented performers kept my family mesmerized with their song and dance. Exceptional acoustics made the performance even more enchanting.

A family visit to Jacksonville wouldn’t be complete without a stop in Adventure Landing, a family entertainment center that offers a water park, go-kart rides, laser tag, and putt-putt golf. When Peter, the boys, and I drove up, Scott, Jasper, and Ross wistfully eyed the water park’s awesome slides, but since it’s only open from spring to fall, we couldn’t partake. We did, however, enjoy Adventure Landing’s other attractions, especially playing putt-putt golf amid palm trees and waterfalls. I even tried laser tag for the first time, surprising everyone, including myself, with the highest score!

I have to give a high score in general to the Jacksonville area. As a family vacation destination, it offers visitors a wide variety of choices for fun and adventure. Whether it’s history or nature or family entertainment, Jacksonville deserves exploration. Next time you’re heading for Orlando or the Keys, take the Jacksonville exit off I-95, relax for a few days, and enjoys this region’s many charms.

For more information about visiting Jacksonville, call 800-733-2668 or visit www.visitjacksonville.com.