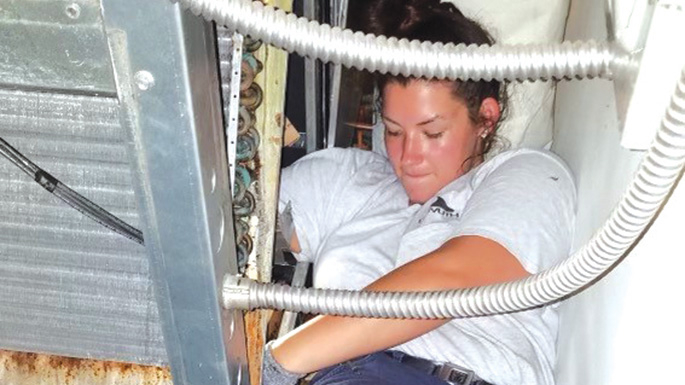 Women in the Trades

Meet local women who are discovering new careers in the trades.

Growing up, Holly Dawson accompanied her grandfather and father on calls to fix broken air-conditioning and heating systems. She saw first-hand how they enjoyed the challenges of a job that helped make people feel better in their homes. She knew early on she also wanted a career in HVAC.

Today, 21-year-old Holly is completing her final semester in the HVAC program at Virginia Technical Academy in Newport News. At the same time, she works as an HVAC apprentice for Damuth Trane in Chesapeake. She admits it hasn’t been easy, but she never gives up.

“I’ve had self-doubts and sometimes believed that I wasn’t strong enough to physically get through the demands of the work, but I pushed through the negative thoughts with encouragement from friends and family,” she said.

There are many more Hollys training to be plumbers, electricians, and carpenters, according to industry experts.

“While the trades have been a male-dominated field historically, more and more women are starting to join the industry due to the career advancement opportunities and financial freedom,” said Gwen Mallory, administrator of education at Virginia Technical Academy.

In 2018, the academy became a state-certified trades school and has graduated 34 women in the fields of electrical, HVAC, plumbing, and building maintenance.

“Many industries have begun to realize it’s time to get past the stereotypes and employ a more diverse workforce,” added Gwen.

Here we meet some of those women breaking that stereotypical glass ceiling.

Emily Baynes Gets the Job Done at Dominion Energy

Being a Lineworker is Challenging But Rewarding

Emily Baynes has never thought being a female should define her work ethic or her ability to get a job done.

Nowhere is that more important than now in her training program to be an overhead lineworker for Dominion Energy.

“The training can be challenging at times, but that’s what I like most about it because I’m challenging myself to be better at my job,” said Emily, 31. “And every day I’m learning something new.”

“What’s most challenging is figuring out what works best for me, given my height [and] strength when working out of a bucket or out of my hooks,” she continued. “What works for you may not work for me.”

Emily, who lives just over the border in Knotts Island, has always preferred to work outdoors, beginning at age 15 as a seasonal worker on a produce farm. Later, she worked for a construction company, installing custom shower doors, insulation, and fireplaces, and then went to an electrical company. That’s when she decided she wanted to work for the power company.

“No one has ever tried talking me out of a trade,” she said. “I believe in the saying: ‘You can do anything you want, if you put your mind to it.’”

Her typical day begins with loading materials such as poles, cross arms, transformers, wires, cables, and insulators into the truck and then unloading it all on the job site. After a job briefing with the crew, the linemen go up first and do their work and let the trainees go up and finish the task.

Emily is one of five female lineworkers in the state and the only female one at the Virginia Beach office. Luckily, she works with an “awesome group of guys, and we all get along great,” she said. “It’s like going to work with your brothers every day. We crack jokes, laugh, and have fun together, all while getting the job done safely.”

The rigors of the job definitely include weather, Emily says. Regardless of rain or shine, heat or cold, when the power goes out, she’s in the weather helping make sure power is restored. The rewards are worth it when you see the smiles on people’s faces when you and your truck appear, Emily adds.

“I consider myself a professional and I also like to have fun with my colleagues at work,” she said. “Life’s too short. If you love what you do, then you’ll never work a day in your life.”

Loves Being at the Forefront of Technology

Fresh out of high school, Dawn Johnson had no idea what she wanted to do. A friend mentioned job and career advancement opportunities at Cox Communications.

In 2020 the 42-year-old Newport News resident moved into her current position, a construction planner for the Network Transformation Team. In her role, she plans, coordinates, constructs, builds, repairs, and inspects the network that provides voice, video, and broadband video to residential and business customers.

“I don’t have a formal background in engineering or construction, so meeting with men who have been in the industry for years was intimidating at first,” she said.

“The most difficult and also rewarding part of my training definitely came on the job,” Dawn continued. “I began working with people who have had years of experience in the construction world, understand the terminology, as well as the processes and procedures around city regulations. Over time I picked up the lingo and can hold my own in conversations and out in the field.”

It may sound cliché, she says, but there’s never a typical work day. She visits sites to go over network plans with construction crews, estimates construction costs, and designs efficient network routes. Plus, she coordinates with other utilities and localities to obtain permits, access, and agreements. She has to pivot at any given moment.

There’s always something around the bend to keep you motivated, Dawn finds. Cox recently announced a multibillion-dollar infrastructure investment that will keep her and her team busy helping build a 10-gigabit-capable, fiber-based network that will power the next generation of network users, she says.

“I love being part of the forefront of new technology,” she said.

Dawn is not alone in her role at Cox, which has more than 50 women in technical roles such as field techs, construction planners, and engineering specialists. About 37 percent of its workforce in Virginia is female, according to a company spokesperson.

Her advice to women: “Do your research, find ways to job shadow others and look for mentors.”

Holly Dawson and Lisa Watson Love Their Work in the Trades

As the only woman in the service department at Damuth Trane, Holly says she works extra hard to prove herself. Just the physical aspect of the job is demanding every day: time on roofs, in attics, outside on cold or hot days, or inside squeezing between HVAC equipment and rafters or walls.

“Physically, there are some things I am unable to do or have an extremely hard time doing, but I try my best and ask for help if I need it,” she explained.

Emotionally, sometimes she gets down on herself because she compares her abilities to male coworkers. “It’s given me more reason to prove to myself and everyone that I am able to do the job just as well, if not better, than a man could,” she said.

“Women prove time and time again, gender does not define a person’s work ethic, capabilities, skillset, or knowledge,” Holly said. “The individual’s drive, dedication, and hard work is ultimately what determines their impact in the workforce.”

After 15 years of being a stay-at-home mom, Lisa Watson found herself single with three children, ages 7 to 14, to support. With previous work experience as an electrician’s helper, she also decided to attend Virginia Technical Academy.

“It was a bit challenging only because I was completing what usually takes two years in six months,” said the 43-year-old York County resident. She works as an assistant electrician technician at Christopher Newport University and is working toward her journeyman license.

“‘Learning a trade is important for women to become more independent and to shake the stigma it’s a man’s world,” she said. “I have a great schedule that allows me to be the best mom to my kids. My advice is to research the companies you want to work for, and don’t accept the first job offer. I’m glad I held out for CNU.”