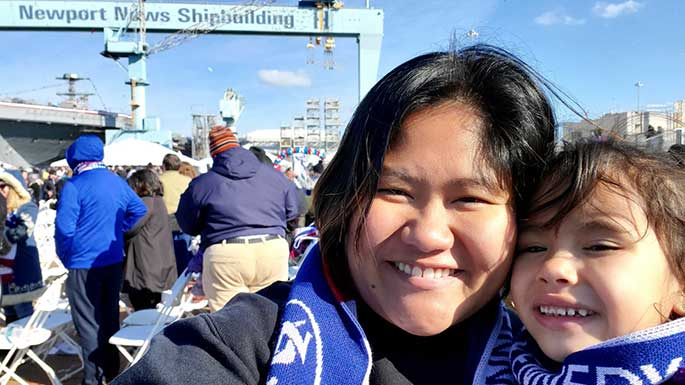 by Melissa Face
Published in Community
Rate this item
(3 votes)

Learn why women and the trades are a great combination.

Founded in 1886 as the Chesapeake Dry Dock and Construction Company, Newport News Shipbuilding constructs the world’s most advanced aircraft carriers and submarines for the United States Navy. Currently, the “yard,” as it is has been affectionately named by generations of workers, employs more than 25,000 shipbuilders, including approximately 4,630 engineers and designers. As of June 2021, more than 900 women have been hired into trades positions at the shipyard.

This month, we chat with three local women who work “inside the gate” of Newport News Shipbuilding about their daily responsibilities, opportunities for advancement, and how it feels when the ship they’ve worked on for years heads out on its first mission.

Sara Salisbury, a Planning and Scheduler I 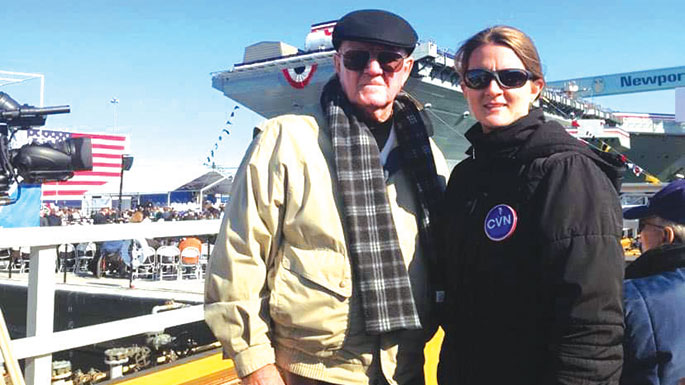 Sara Salisbury, a Planning and Scheduler I, has worked at the shipyard for almost 18 years. “I’m in the steel fabrication shop. My shop cuts steel plates to send to the entire yard,” she said. “We service all programs, including new construction and overhaul.” Sara’s position also requires prioritizing jobs so that all projects are completed in a timely fashion.

Building carriers and submarines for the U.S. Navy calls for a true team effort. Emails exchanged between different shifts are addressed to the “team,” and a cooperative spirit is essential. “It takes everyone doing their part to get these boats built,” Sara said.

It also takes a lot of time to see the ships from design to completion. Seven years is the approximate time period for building an aircraft carrier. The Gerald R. Ford (called CVNX in the early days before it was named by the Navy) was the first carrier Sara worked on when she began at the shipyard. “The Ford was also the first carrier in a 3D product model. When I arrived, we were in the concept phase, she said. “There was hardly anything in the space. The 3D model allowed us to see if everything would fit.”

Hearing Sara describe her job, one would think it was a career she had envisioned for years, but that wasn’t exactly the case. “I applied when I found out the Ford was coming on board and they needed people to work it,” she said. Sara first completed classroom training, on-the-job training, and was then assigned to a group. She has also been on a two-year rotation where she moved to a different location within the yard every six months.

Sara speaks of former positions at the shipyard with reverence. “One of my rotations was as a construction supervisor. It was an outdoor position, and it was so, so hot,” she said. “I was a woman in a man’s world, but I learned and grew so much.”

Today Sara continues to enjoy her work and the pride that comes with building ships for the military. She affectionately refers to the Ford as the ship that “has her heart.”

“The shipyard has given me everything I’ve ever wanted. I have the biggest smile on my face right now. I’m sorry you can’t see it,” Sara said.

Loves the Sense of Accomplishment Her Career Provides 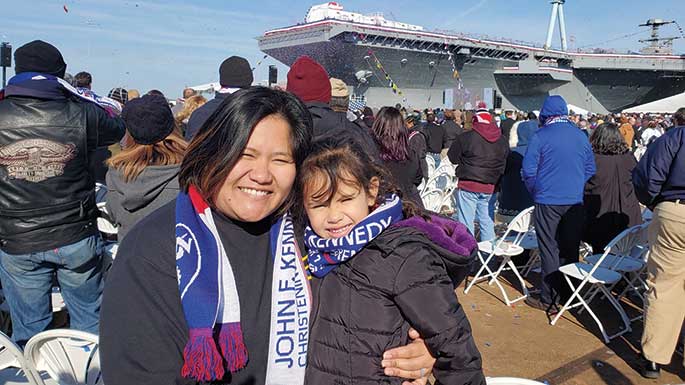 Veronica Hamilton, a shipyard employee who recently joined the Apprentice School, loves taking her family to special events at the yard. “My husband and I tell our children (ages 6 and 2) that we helped build this ship,” she said. “The children look up in amazement and say, ‘Wow! That big thing?’”

For three years, Veronica worked as a machinist, rotating every six months so she could become familiar with all aspects of the ship. “It’s one of the most rewarding jobs I’ve ever had,” Veronica said. “You get to see what the raw material looks like in comparison to the drawings. There is a great deal of satisfaction and sense of accomplishment.”

Problem solving was a big part of Veronica’s last position, as she and her coworkers were responsible for cutting and contouring metal. Her day-to-day work, though enjoyable, wasn’t always easy. Veronica was one of only two women on her shift, and she often had to use a step stool to reach the machine and change out the tools. “It was a challenge to make myself look good around the boys,” she said. “I needed to prove to myself that I could do what men do.” Veronica worked hard and kept her instructor’s words of advice close by: “When you sign your name on any completed job, make sure you gave it your absolute best.”

When Veronica obtained an associate’s degree in mechanical engineering technology, she didn’t know that would lead her to a career building aircraft carriers and submarines. She thinks young women should consider this line of work for a variety of reasons. “I was just having this conversation with one of my sitters the other day,” Veronica said. “Working at the shipyard pays well, doesn’t leave you with debt, and once you’re in the company, you can go wherever you want to go.”

A career in shipbuilding can offer competitive pay and upward mobility. Plus, the enormous sense of satisfaction and pride in completing an important job is hard to beat. “Just the fact that we are building for the military and that the life of the people in the ship depends on the quality of my work. That makes me do my best every day, on every project,” Veronica said.

Proud To Help Defend Our Nation 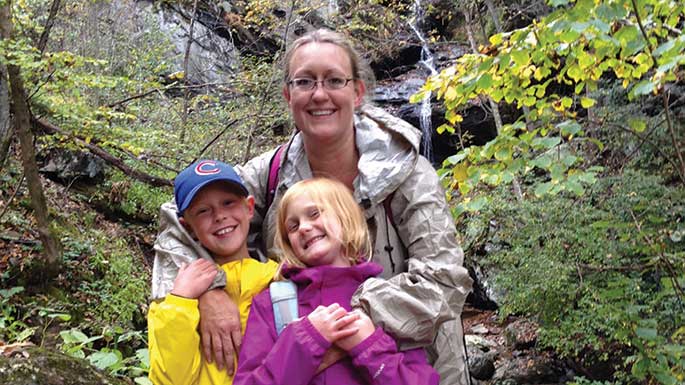 Ginny Matalevich lives in Northern Suffolk and works as an Engineering Manager III at the shipyard. She manages a group of one hundred employees and has been in her current position for a year and a half. “I like the mission of what we do and that we’re part of defending our country,” she said. “It’s a compelling mission.”

Ginny studied mechanical engineering at Purdue University and moved to the Hampton Roads area from upstate New York. She finds working at the shipyard to be an ideal situation for an engineer because the work is challenging, employees can actually see things being built, and the organization is often trying something innovative that has not been done before. “I know a lot of people move to different groups at the yard, but I’m partial to the idea of starting in design and seeing it through to delivery,” she said. “It’s very satisfying, very fulfilling.”

Currently, the ship Ginny has been working on is undergoing shock trials, a set of tests that help determine how various systems would hold up if the boat were attacked. “The shock trials are a culmination of a lot of really hard work. Things went well on the first tests, and that feels great. We put in the effort, and we succeeded,” she said.

Ginny has been trying to convince her seventeen-year-old daughter to go into engineering. “When I was in college, there was sometimes only one other female in a class with me, but that isn’t the case anymore,” she said. “The more women we can get in this field, the better. They make great collaborators and fantastic engineers. Girls are just as good as boys at problem solving, and some girls have even better interpersonal skills.”

In addition to the fact that there is always something new and interesting happening, another benefit of working at the shipyard is that you can be a leader regardless of your job title. While Ginny currently works in a management position, she says that the yard fosters an attitude of leadership in all employees. “If you want to make the shipyard a better place, you can do that from any position,” she said.

Female employees are needed in this line of work and all of the trades, for that matter. The work is steady, starting pay is high, and many positions will soon be available due to a record number of retiring skilled tradespeople. There may have been a time when shipbuilding was considered “man’s work,” but fortunately that ship has sailed.

• For information on careers with Newport News Shipbuilding, visit https://nns.huntingtoningalls.com/.
• Learn more about women in the trades at https://explorethetrades.org/women-in-the-trades/.