Single Parenting in a Pandemic

Meet local single parents who are surviving and thriving in the pandemic.

In the painful days following her divorce, Myra Wight’s friend brought over pizza to make sure she and her kids ate dinner. “My ex moved out three days before our wedding anniversary,” she said. “One of my friends brought me flowers on that anniversary, and that started a domino effect.” Since then, Myra has leaned on her circle of friends through the hard times and has survived because of what she calls “beautiful distractions,” the kind gestures she receives from others.

Currently, there are nearly 13.6 million single parent homes in the U.S., and the ongoing health crisis has made an already difficult situation even more distressing. Let’s hear from three local parents who are facing the challenges of single parenting during the pandemic.

Focus on the Positive 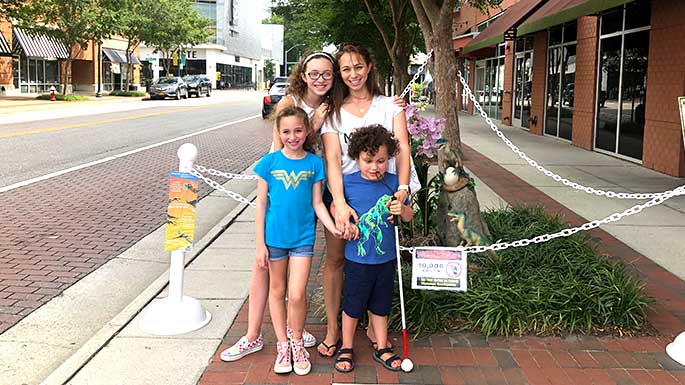 Single parenting is especially challenging when a child has a serious medical condition. For several years, Myra Wights’s youngest child, Mylo, 7, has been battling an inoperable brain tumor.

“We live in the cancer world,” said Myra, a Chesapeake resident and mom of three. “Since he was diagnosed, he has constantly been on chemo, constantly fighting.”

Because Mylo’s situation requires regular monitoring, he continues to have many appointments throughout the pandemic. “My schedule is always busy. And it’s always been me taking care of the kids, scheduling the appointments, and dealing with school stuff,” Myra said.

In addition to managing her children’s virtual education, she is also taking classes at Old Dominion University, working toward a Bachelor’s degree in health services administration. “If you could just see my desk and where I study,” Myra laughed. “There are stacks of binders and doctor notes everywhere. But at least the kids’ desks are organized.”

It’s a lot to manage, for sure. Myra is grateful for the support she has from her neighbors, her mom’s group at church, and from Roc Solid Foundation. She also credits her two older children, Kieara and Lilah, with helping around the house. “Lilah is like a little mom,” Myra said. “They both keep an eye on Mylo while I get work done. Really, they’re just amazing humans.”

Even though many of their days are hectic and sometimes send them in different directions, Myra makes a point of ending each day the same way.

“Everything stops at 7 or 8 p.m.,” she said. “We relax on the couch, watch movies, and sing songs before bed.”

Myra chooses to focus on the positive parts of her life, and she cherishes her support system. She admits that she could benefit from a little more self-care, though. “I don’t schedule much ‘me time.’ I need to work on that,” she said.

Time to oneself is essential, but self-care can be a true struggle for single parents. “In whatever ways are possible, single parents need to schedule downtime,” said Dr. Lindsay C. Gibson, a licensed clinical psychologist in Virginia Beach. “Some parents try not to ‘waste’ money unless it’s absolutely necessary to have someone else care for the kids. But the pandemic is that rainy day you’ve been saving for.”

Support from Other Moms

Grateful for Help from Parents 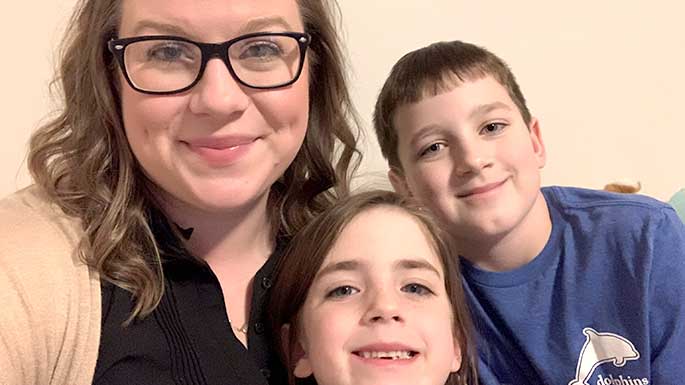 “A social life? What is that?” laughed Saralyn Whaley, a Virginia Beach mom of two. Saralyn works full time and manages Carson and Chloe’s (11 and 7 years old) online learning. She is thankful for the support she receives from other moms and her own parents. “Luckily I don’t get sick very often,” she said. “But I don’t know where I’d be if I didn’t have my mom.”

While many of us have missed our regular routines and social interactions throughout the pandemic, this time has felt especially isolating for some single parents. “These parents now find themselves trying to meet social and recreational needs that the community used to supply,” said Dr. Gibson. “Isolation narrows everyone’s options for both stimulation and comfort.”

Saralyn says there are many challenges that come with single parenting, like communication with the children’s father and planning visitations. The pandemic has made an already stressful situation even more so because of the additional risk of exposure when children travel between households.

“The uncertainty, the not knowing is especially difficult,” she said. “But I’m a strong person. I’m not looking for pity.”

Saralyn celebrates her children individually with movie nights and pedicures, and she treasures the time she spends with them at baseball games and Girl Scout events. She loves participating in their activities.

She also copes with the more challenging times by taking walks and going to the gym. Recently, there have been some especially challenging times. “My son brought up the sex conversation the other day,” Saralyn said. “He had been on the internet when I didn’t know, and he had a lot to ask!”

Being Flexible with Child Care 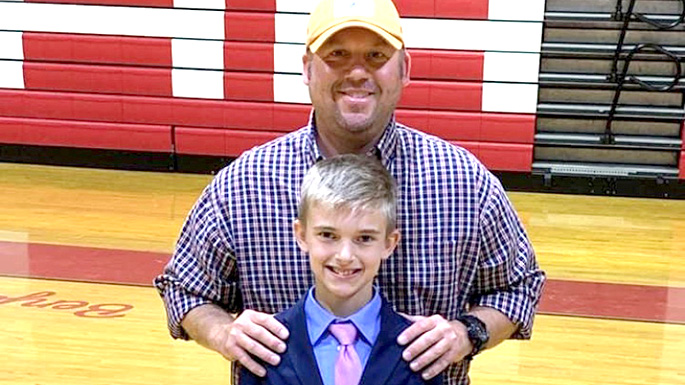 Jim Bob Darden is a single dad and a firefighter/medic in Newport News. His work schedule changes each week, so his childcare situation is always fluid.

“My son’s mother is a nurse, and her schedule changes just like mine does,” he said. “Childcare depends entirely on who is free, and our parents help us out a lot.”

The fact that Jim Bob and his son’s mother are both essential workers has made their parenting situation even more stressful. “I’m a medic in the field,” Jim Bob said. “I have to go into people’s houses, and they usually aren’t wearing masks when we are called. There is always risk of exposure, but I take all the precautions I can.”

Dr. Gibson reminds us that most single parents are currently ‘on the front lines,’ so to speak. “The fatigue of always being on call to help children with their emotional distress is a challenge that doesn’t get enough attention,” Dr. Gibson said. “For single parents, they are on the front lines of providing empathy and unconditional love from daybreak until bedtime. No wonder they are exhausted!”

Despite the stress and fatigue, Jim Bob can’t say enough about the rewards of fatherhood. “There are so many great things about being a dad, so many proud moments,” he said. Recently, his son purchased an Xbox with money he saved from completing chores and helping with the family’s landscaping business. “It’s so great when your kid demonstrates something you’ve tried to instill in him,” he said.

When asked what makes him a good father, Jim Bob didn’t hesitate a moment. “It’s all about the time I spend with him.” He and his son are outdoors together every chance they get: hunting, fishing, searching for artifacts, or enjoying a nature walk. And once each month, Jim Bob takes his son out to eat and encourages him to order whatever he wants. On those nights, his eleven-year-old isn’t limited to the kids’ menu. “He can even get dessert,” Jim Bob said. “But he usually doesn’t because he’s stuffed!”

Jim Bob appreciates all the moments that he spends with his son throughout the week. Like many other single parents, he is an expert at making the most out of a short chunk of time and can turn the simplest experience like a Tuesday night dinner or a drive home from school into something meaningful. “We have had a lot of good conversations after school when I’m taking him to his mom’s house,” Jim Bob said. “We take advantage of every moment together.”

Jim Bob and his son are looking forward to their annual Outer Banks trip later this fall. “It has been a family tradition since I was a kid,” he said. “My parents go and we have other relatives pop in throughout the week. Fingers crossed that it happens this year. We need it.”

Single parenting is incredibly difficult at this time, but parents like Saralyn, Jim Bob, and Myra are accustomed to finding their way around obstacles. They frequently manage last-minute schedule changes and contend with the unknown.

For Myra, there is much uncertainty in terms of school schedules and her son’s medical appointments. She doesn’t seem overly worried, though. She is focusing on what she can count on: help from neighbors, support from friends, and endless cuddles from her three children. These are just a few of her “beautiful distractions.”