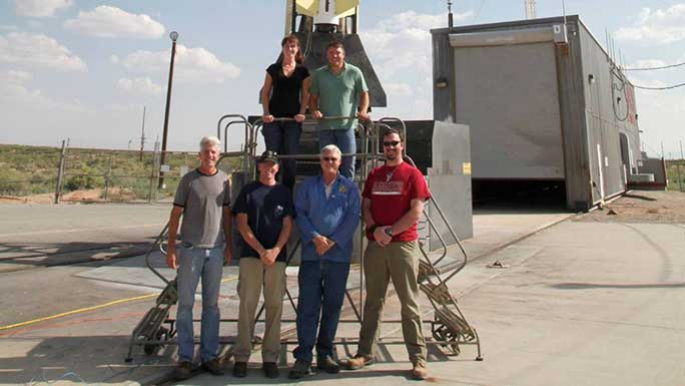 Meet local women who are paving the way in STEM careers

Women currently comprise only 28 percent of the workforce’s science, technology, engineering, and mathematics (STEM) positions, according to the American Association of University Women. A primary reason for this low percentage is that girls and women are often steered away from mathematical tracks early in school. Also, girls don’t have as many role models for inspiration in these fields as boys do, and many high-paying STEM jobs are often stereotyped as being masculine.

Overall, girls and women need more skill development and encouragement from teachers and parents in early and secondary education in order to close the gap.

This month we are talking with three local female scientists who were encouraged by their teachers and inspired by their own real-life experiences. Let’s meet women who are paving the way for others and find out what it’s like to launch rockets at a flight facility, accelerate electrons in a national research laboratory, and explore boiling rivers in the Peruvian Amazon. 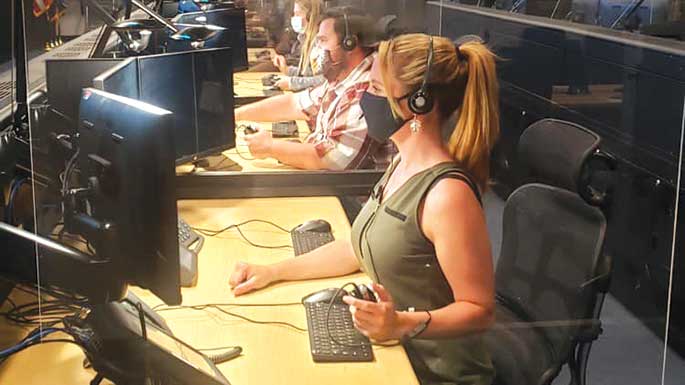 “It isn’t rocket science,” people often say when describing a task that doesn’t require a great deal of skill or intellect. Brittany McKinlay, a project manager at Wallops Flight Facility, isn’t a fan of this expression. “While this field is definitely important and requires focus and attention to detail, I don’t like the connotation that it’s inaccessible,” Brittany said. “It’s not. If you have the drive and interest, you can do it.”

In fact, when asked about the most challenging part of her job, Brittany said it was communication. “It’s funny because you think the technology would be the most difficult aspect, but communication is key and our teams are very large,” she said.

Brittany is the first woman from the Wallops Launch Range to lead a launch of an Expendable Launch Vehicle (ELV) into Earth’s orbit. She developed an interest in space as a young girl and loved checking out the moon with her telescope. When she and her classmates launched water rockets in high school, Brittany’s interest in space exploded. She earned a BS in Aerospace Engineering and worked for nine years on Wallops Island as a mission manager for sounding rockets before moving into her current position.

“I’m in the range control center, so I see the launches on camera,” Brittany said. “Just the other day, I completed my second launch as a project manager. It’s so exciting, and you can feel the rumble of the rocket inside the control center.” While launch days are thrilling, they are also quite stressful, as many variables contribute to a successful launch. Computer issues can affect a launch as can weather.

“Weather is actually a huge factor,” Brittany said. “Rain isn’t too bad, but lightning is a problem—especially on summer afternoons on the Eastern Shore. Plus, when rockets fly through certain cloud types, they can sometimes create lightning.”

This year is particularly busy for Wallops Flight Facility because many campaigns were delayed during COVID. As they clear out their backlog of launches, they may be putting satellites into orbit or sending supplies to the International Space Station. “Sometimes we are resupplying them with oxygen tanks, food, or even a new space toilet. We also send up a lot of science experiments,” Brittany said.

Dr. Marcy Stutzman is a staff scientist in the Center for Injectors and Sources at Jefferson Lab in Newport News. Jefferson Lab, a U.S. Department of Energy Office of Science national laboratory, studies how the nucleus of an atom is made up in order to better understand the rest of the world. “I work at the beginning of the machine, where the electron beam starts,” Marcy said.

This machine is a unique particle accelerator that is used by scientists worldwide to gain a better understanding of physics. Known as the Continuous Electron Beam Accelerator Facility (CEBAF), the machine accelerates a beam of electrons to near the speed of light, which then hit a target, and there cannot be anything in the path of that beam—not even a molecule of nitrogen. “It is pure research,” Marcy said. “We are working to understand how matter stays together and how the universe works.”

One of the joys of her job is Marcy gets to do something different on a daily basis. Another rewarding factor is the important spin-offs that have come from the technology at Jefferson Lab. “Our detector group has adapted nuclear physics detectors for medical applications,” Marcy explained. “This technology has been used to develop improved breast cancer imaging.”

Marcy collaborates with scientists around the world, publishes research studies in a variety of scientific journals, and occasionally writes proposals for funding. “I like that I’m doing smaller scale research,” she said. “I get to be highly involved in most phases of the experiment.”

Marcy and other scientists at Jefferson Lab are involved with community outreach and education. They host the Virginia Regional High School Science Bowl as well as a semi-annual open house where visitors can tour the accelerator tunnel and other areas that are typically closed to visitors. “The tunnel is a mile long and about 30 feet underground,” said Marcy. “It’s incredible. It’s fun sharing what we do here and why we love it.” The next open house is scheduled for March 26, 2022.

Just recently, Marcy celebrated twenty years with Jefferson Lab. At nineteen, she began working in physics when she accepted an undergraduate summer research position. She still speaks about science with excitement and credits her high school physics teacher with making the subject so much fun. 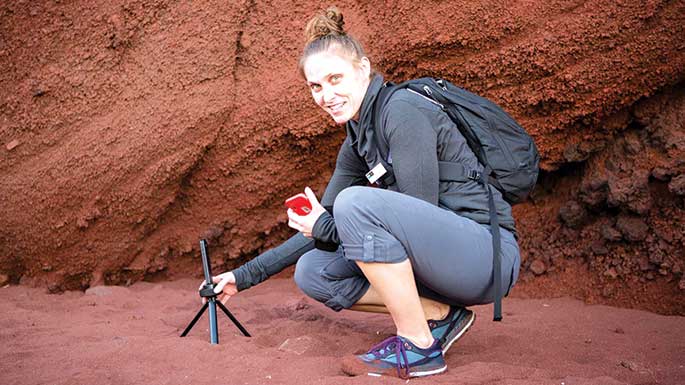 Education and fun are two areas that Becky Schnekser of Norfolk knows well. As an elementary school teacher and field scientist, Becky brings the world of science back to the classroom. “I travel to different locations around the globe, complete field research, and bring that information back to schools,” Becky said. “I’m responsible for creating educational materials for teachers and students about what it’s like to go on expeditions.”

Becky is a permanent member of a core team of four scientists that annually visits the Peruvian Amazon. The team studies rivers, collects data, and ultimately examines global change. This summer, however, Becky went to Iceland where she circumnavigated the country, spending the first week in a camper van. “We talked to locals, got a feel for the culture, and looked at landforms and how they have changed over time,” she said. “For example, the seafloor is spreading and Iceland is getting taller.”

Becky always knew she wanted to bring learning to life. She looked for ways to be a better scientist and teacher while continuing her own education. She didn’t plan on being a field scientist until she wrote a grant to go to the Amazon for the first time. To date, Becky has explored Tangier, the Galapagos Islands, Iceland, and Peru, and she plans to travel to the Antarctic.

This fall, Becky’s adventures are happening a little closer to home. She recently accepted a position as lead teacher at YELLOWHAB, an all-day educational program for elementary students in Norfolk. She is looking forward to continuing expeditions and including more students and educators and empowering them to explore the world.

Not everyone starts off excited about science, but Becky’s mission is to help students see that science is happening all the time, all around us. “Playing sports, playing video games, even what you ate for lunch is science,” Becky said. “My challenge for everyone is to look more closely and see where science exists within your own interests. You might be surprised!”

Careers in science, technology, engineering, and math are innovative and exciting. Many are also well paying, but the gender gap is tremendous. In order to encourage more females to pursue these fields, we have to address the impact of stereotypes, the necessity of female role models, and the barriers of low confidence and math anxiety. Now that we better understand the variables, we can make STEM careers more attractive for women and solve the equation for female success.