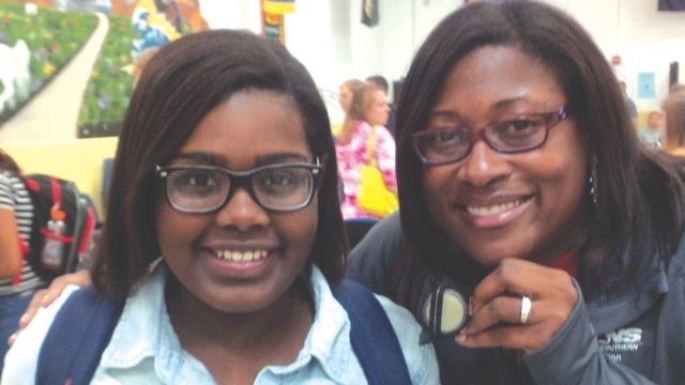 by Stephanie Allen
Published in Community
Rate this item
(7 votes)

Kids need adult role models to look up to and trust. Parents may be the first role models a child has, but sometimes listening to Mom and Dad can be a drag. It’s often easier to confide in another person, someone who can provide a neutral perspective. In some cases, parents may not be available to a child to talk to. A trusted adult can help children work through problems and take steps toward their dreams.

“Mentoring gives a child their own personal life coach,” said Tashara Void, who has recently completed a service term as an AmeriCorps VISTA leader for Hampton Roads and is now a trainer and technical assistance provider with the Virginia Mentoring Partnership. A mentor is “someone who has been where they are and can show them how to move past this phase of their life,” according to Tashara.

Here in Tidewater, local organizations like Seton Youth Shelters, Girls with Goals Alliance, and The Up Center connect passionate mentors with children in need of extra guidance. Let’s take a look at a few inspiring mentor/mentee relationships and learn more about the benefits of mentoring.

HEALTHY LIFE CHOICES
Elaina Blanks-Green has always had a passion for helping others. After moving to Virginia in 2003, she joined the board of Dress for Success Hampton Roads. There she met Delores Perry, executive director and co-founder of Girls with Goals Alliance in Portsmouth, a mentoring program for girls ages 8-18. Girls with Goals Alliance promotes “positive and healthy life choices for young girls,” according to its website. Elaina volunteered to be a mentor and was paired in 2011 with then-10-year-old Kori Lea.

The program typically matches a mentor with a mentee for one year. At the end of the year, each participant completes an evaluation to determine whether the match was successful or could be improved. Kori and Elaina have been paired for four years now, “largely because we’ve had a pretty successful match over the years,” Elaina said.

When they first met, Kori was already a good student, Elaina says, but she was more reserved. Now 14, Kori is involved in many school activities, such as Color Guard, the Environmental Club, and even the Spanish Honor Society. She’s also a Girl Scout.

Elaina attends as many of Kori’s school events as she can, including violin concerts and award ceremonies. As a general tax attorney for Norfolk Southern Corporation, Elaina has also introduced Kori to the world of law. As a result, Kori, who dreams of attending an Ivy League school one day, says she may consider pursuing a career in law.

Kori’s interests include reading and watching movies, activities Elaina and she can enjoy together. They also attend community service events.

“I remember when we participated in the veterans’ race, and Kori came with me and we passed out water to the racers,” Elaina said.

Kori says in the time that Elaina has been her mentor, her grades have improved and she feels she is not as shy as before. She says she looks up to Elaina. “I feel like she has everything together. She’s very well-rounded, and I’d like to be like that when I’m older,” Kori said.

Elaina is currently expecting her second child and will be stepping down as Kori’s official mentor to allow a new person to step in that will be able to devote more time to Kori. Still Elaina says she will always remain a part of Kori’s life and be a second mentor figure to her.

Mentoring can have an amazing impact on a child’s life, says Elaina. “[It’s] a passion of mine that I absolutely love, and I wish this program much success and growth.”

POSITIVE OUTLOOK
Toniette Parker and her mentee, Maya* (name has been changed for confidentiality), also share a close relationship through the Mentoring Children of Prisoners (MCP) program at Seton Youth Shelters in Virginia Beach.

MCP is one of many programs offered by Seton Youth Shelters and is available to any child ages 4-18 who has been affected by the incarceration of a person in his or her life, not necessarily a parent. The goal of the program is to provide mentors who will “foster a sense of self-confidence and a positive outlook for the future,” according to the website. The shelter also provides counseling, anger management for children, drug education, and support groups, all free of charge.

Carrie Weiler, director of the MCP program, emphasizes the importance of a mentor in a child’s life. “Just keep in mind the huge impact that one positive role model can have on a child,” she said. “It’s really a huge thing.”

After both of her parents were incarcerated, Maya’s caregiver reached out to MCP to get Maya involved with the program. She was originally paired with different mentors, but didn’t feel that they were compatible matches with her. For nearly two years now, Toniette has been mentoring Maya, who is now 13 years old, and they have developed a very close relationship.

When they first met, Maya says she had very low self-esteem and was having troubles in history class. She was shy and even used to cover her face in photographs. Now Toniette says that Maya regularly sends photos showing her happy and smiling. She’s even wearing dresses, which she used to hate.

When Maya’s father passed away from cancer, Toniette was there to help her through the difficult time. Toniette related to the situation, as her own father is battling cancer as well. “I truly understand how it feels,” Toniette said.

Even though she has a busy schedule—juggling her full-time job as a clerk for Norfolk Southern, keeping up with her 17-year-old son, and making time for her family, Toniette still makes sure Maya is a priority. She suggests to others who may want to be a mentor “not to take that role lightly because they just want you there.”

Since being involved in the mentoring program, Maya is even influencing her friends at school. “My friend said I’m the reason she stopped smoking,” said Maya. Toniette says Maya is more confident and outgoing now, regularly participates in service events, and likes to go to church on Sundays. She is also involved in the AVID (Advancement Via Individual Determination) program, which prepares students for college through academic enhancement and career training. Maya hopes to attend Florida State University for massage therapy and wants to own her own business one day.

“[Toniette] shows me that I can make it in this world,” said Maya. “She’s helped me channel my anger, and I look up to her because…I know that she’s somebody that understands what I’m going through.”

LIFE LESSONS
When he was just nine years old, Chatman Shellman appeared on a local television program called “Wednesday’s Child” to talk about why he wanted a mentor in his life. Alonzo Parker immediately stepped in to help out and, after applying with the Team Up Mentoring Program in Norfolk, became Chatman’s mentor.

“I lost my father when I was 17,” said Alonzo. “I realized how much he meant to me, and I really wanted to give back some of the lessons that he placed in my life.”

The Up Center was originally founded as an orphanage and has since evolved to offer a foster care program, mentoring, summer camps, parenting support, and much more. They help thousands of families in Hampton Roads every year.

Now 14, Chatman says he has learned a lot from Alonzo, including the importance of family and to take his schoolwork seriously. For the past two years, Alonzo has also taken on the role of mentoring Chatman’s 10-year-old brother, Chancellor.

Just in the time that he has been mentoring the boys, Alonzo says they have developed so much in interpersonal skills, school, and even handling emotions. “Chatman has learned more how to express himself,” said Alonzo. “Instead of a lot of frustration at times, we can actually have a conversation about what he’s frustrated about.”

Alonzo tries to take the boys to as many fun activities as he can, such as Busch Gardens trips and GameWorks at the mall. Family is a priority for Alonzo, who has two children, so the boys also visit Alonzo’s home for dinner and to play with his own kids.

He helps them with their schoolwork, too, and has seen improvements in their grades and effort. Even at just 10 years old, Chancellor already expresses interest in being a doctor. “Maybe if I’m good enough, I’ll be a surgeon,” Chancellor said. Alonzo, who works in logistics with Norfolk Southern, helps the boys realize their goals by teaching them consequences for their actions and that hard work is important.

Mentoring takes time and commitment, says Alonzo, and there is a cost involved when you enjoy activities together. Still, Alonzo is happy to take on the responsibility. “I’m not being funded or anything. I do this because I love these guys,” Alonzo said. “I really want them to be positive contributors to society.”

January is National Mentoring Month. Consider volunteering your time to help out a young person who needs you. “When a child knows you care, they begin to care,” Tashara Void said. Mentoring a child can be inspiring and rewarding for everyone involved, and the relationship may very well last a lifetime.