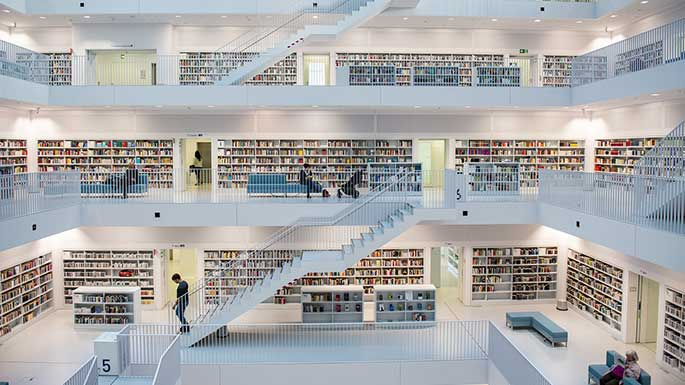 Meet local women who are paving the way to careers in architecture.

Whether it’s a gleaming skyscraper or a cozy split-level home, architecture surrounds us. It’s where we live, work, dine, play, and create. The spaces we inhabit impact our mood and inspire us. And every window, door frame, rafter, and crossbeam began as an idea in someone’s mind.

Today architecture is much more than building buildings. Architects are repurposing and restoring historic spaces, as well as creating a more sustainable future through green building designs. They lay the foundations for community.

Let’s meet a few local women architects who are paving their own way from the drafting table to the construction site. Gone are the glass ceilings of yesterday, replaced by a new wave of cutting-edge design and boundless passion.

Working Toward Her Licensure with Dills Architects 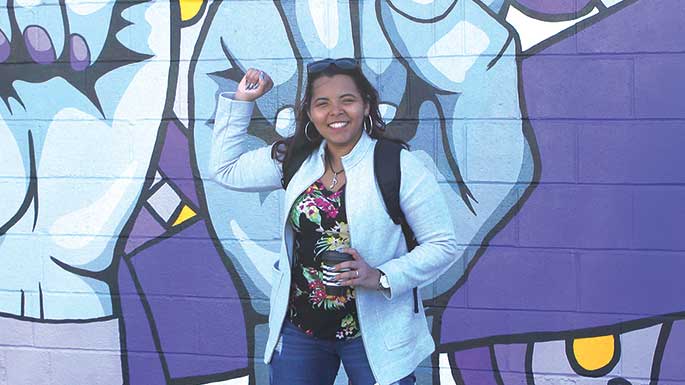 Virginia Beach is a long way from Puerto Rico, but for architectural designer Natasha Ayala Mercado, it’s just part of the journey towards her dreams. Even as a child Natasha was drawn toward architecture. She lived with her large family in a small house in Puerto Rico and was always designing a new place for them to live.

“Growing up, we lived in a tiny home, all five of us in a two-bedroom, and I would be working with paper and pencils to create our family house,” said Natasha. “My dad wanted me to study engineering, but my heart was in design.”

Natasha describes herself as the baby in the office of Dills Architects in Virginia Beach, where she works. Having joined the firm right out of college in 2017, she is currently working on the grueling process of certification and credentialing. “Sometimes I think, ‘Why did I do this to myself?’ It’s so hard and complicated,” she said. “But then I remember why I started, and it makes it worth it.”

One of her favorite projects has been her contributions to the expansion of E.W. Chittum Elementary School in Chesapeake. This school was over capacity and was no longer serving the community’s needs.

“We’ve been able to be on site during the construction, and it’s amazing to see this structure take shape from our designs,” Natasha said. “There are collaboration spaces, so children can interact with each other both inside and outside the classroom. It’s great to be a part of something that will be used for future generations.”

While architecture may have historically been a male-dominated industry, Natasha sees that changing. In her architecture program, the female students outnumbered the males three to one. The main challenge she faces is her youth.

“It’s difficult to bring a youth culture and mindset into a very established industry,” she said. “I see it when I go to American Architectural Institute events. People always think I’m still in school and ask what I’m studying. Hopefully, with my licensure those assumptions will go away.”

Natasha’s focus is on historical preservation, and her minor was conservation of historic buildings alongside landscape and ecology. “My focus is to become a Registered Architect,” she said. “My goal is to make the world better through design.” 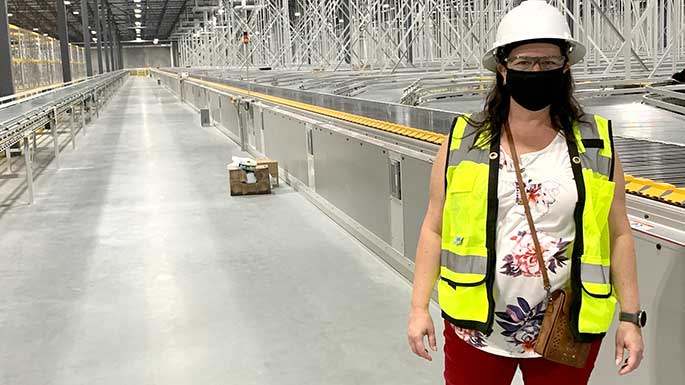 Jaime Rasmussen doesn’t like traditional routes, and it if means building her own, stone by stone, she’ll do it. Jaime is an associate principal at HBA in Virginia Beach, but she began her journey as an unhappy biology major.

She remembers exactly when inspiration struck her. “I was newly married and standing in the closet of our little townhome, hand painting a border on the wall and trying to decide if I wanted it for the rest of the house,” Jaime recalled. “My sister-in-law came in and said, ‘Why aren’t you going to school for interior design?’ It was this moment, where I was like, ‘Yes, I can do that.’”

Jaime switched gears and enrolled in an interior design program at Tidewater Community College. However, she felt there was a lack of job opportunities in the region for interior design.

“My husband said, ‘You are really good at AutoCAD. Why don’t you look into a drafting position?’” From there Jaime applied to a local firm, but in the middle of testing for the drafting position, she froze.

“I had a problem with an AutoCAD command, and I just froze midway through the test,” she said. “I got up and told the firm principal, ‘I’m sorry for wasting your time.’” Little did she know the drafter sitting next to her was watching her test and contacted her later that day. Jaime was offered the job.

“I worked for her for two years and started to fall in love with architecture and began looking for a larger firm to work for,” she said. “I realized I didn’t fit in the interior design world. I belonged on Granby Street, measuring buildings.”

Jaime then joined HBA, where she has spent the last 18 years. Under great mentorship, she accrued hands-on experience in business development, construction documents, structural engineering, and general contractors. “I submitted all my experience to the National Council of Architectural Registration Boards and completed all six exams in 10 months earning my Architecture Licensure,” she said.

Jaime works primarily in the commercial studio and loves mixed-use spaces and the combination of retail, office, and industrial design. “I’m interested in adaptive reuse—where you take something old and give it a new purpose,” she said. “It’s the ultimate green project. Suddenly there’s jobs and energy where there was once an abandoned building. Bringing new life to something that has been forgotten is very rewarding.”

Despite there being moments where she’s looked up and realized she’s the only woman in the room, she praises HBA for being very good at not assuming genders have predetermined roles. “I’m even seeing more women on construction sites now.”

Jaime proves that you can reinvent yourself by following your gut and working hard to attain your dream. “My advice to any woman would be to speak your mind,” she said. “People will respect you if you have opinions.”

Owner of GARC Design Has a Full-Circle Moment 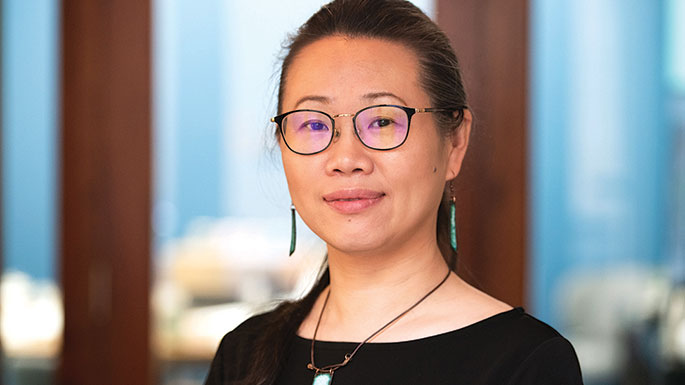 Suping Li was always attracted to buildings. As a child in China, she pored over magazines from foreign countries. “I’d look at these exotic buildings from all over the word and build models out of paper, cutting out windows and doors. I was fascinated,” she said. In high school she started applying for architectural programs.

After earning her bachelor’s in architecture, she spent five years working in the field in Beijing before earning her master’s in Singapore. Soon she joined her husband, who was studying architecture at the University of Virginia. The pair worked alongside each other at Hanbury in Norfolk on a large spectrum of projects, but they eventually decided to open their own firm, GARC Design, in downtown Norfolk.

Currently their firm is focused on residential and small commercial projects. “In some ways, architecture can be like an assembly line, where each person focuses on something different. I’m interested in the whole picture, treating architecture as a work of art,” Suping explained. “If we design a restaurant, we want to integrate architecture, interior, landscape, and branding. We want to know how the kitchen works, what is the story for the visitor and the owner.”

This approach has served them well. They’ve received two awards from the Hampton Roads Association of Commercial Real Estate, most recently for the restaurant Got Fish in Hampton.

“We wanted to bring [the owners’] origin story to the design. Their restaurant is a metaphor for the city, the street, and the home,” Suping said. “You can feel the different layers of space. All of this design is not just to look pretty. It is to tell a story. Architecture can make your everyday life more inspiring and make you feel like you want to come to work.”

Suping said she now sees more women in school for architecture than men. “There are so many women leaders taking critical roles, even in the field of construction,” she said. “It would be nice to see more women on the global stage winning awards.”

The pandemic has presented some unique challenges in the field but also some benefits. “Because people are staying home and there are more multi-generational families trying to adapt together, houses need to adapt for that kind of living with universal design and flexible spaces,” Suping said. “We can always be improving.”

Suping is experiencing a full-circle moment as she now writes for Chinese design magazines and her work has been featured in the international magazines she once devoured as a child. “I would tell a young architect to keep trying new things,” she said. “It’s not just how you build, but how you observe the world and what you learn from people.”

Kindra McDonald Greene is a poet, freelance writer and adjunct associate professor. She can usually be found in the woods or at www.kindramcdonald.com.