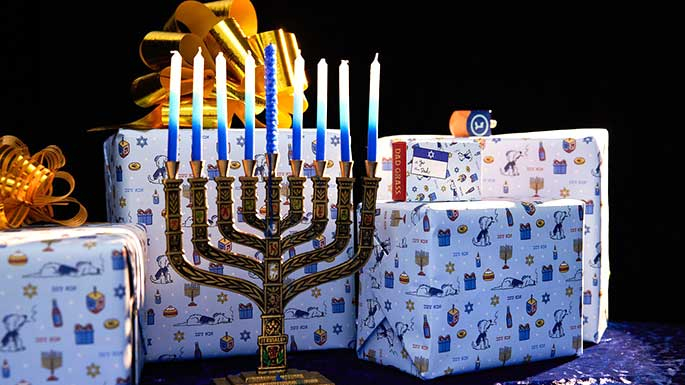 by Melissa Face
Published in Community
Rate this item
(2 votes)

Let’s celebrate the season that unites us all.

For many of us, the holiday hustle is in high gear. It’s the time of year for baking, shopping, wrapping, and celebrating. Here in Hampton Roads, some families celebrate multiple holiday traditions. But the beauty of the season is found where customs merge and generosity and kindness become the focal points. This month, we’re hearing from a few local families about the ways they celebrate and the spirit of the season that unites us all.

Celebrating Christmukkah with the Sass Family

Goodness and Generosity are Key Throughout the Season

Christmukkah is the name of the season for Lydia Sass and her family. Lydia, a resident of Williamsburg, grew up Baptist. However, she and her husband, who was raised Jewish, were looking for a better fit and found a happy medium with Williamsburg Unitarian Universalists. “We were looking for a place that was accepting of all faiths,” Lydia said.

Despite their different upbringings, Lydia and her husband have been pleasantly surprised by the overlap in their traditions. Latkes, a traditional Jewish food, were naturally a big part of her husband’s season, but they were also a staple in Lydia’s family’s annual Christmas meal. “Each Christmas Eve, we peeled and shredded potatoes and chopped onions, and then we went to church. And I know we smelled!” Lydia said. “But it was the smell of Christmas for me.”

Throughout the holiday season, Lydia and her family celebrate both Hanukkah and Christmas. “Depending on how close Hanukkah is to Christmas, since it changes each year, we give small gifts nightly for eight nights, things like pencils and matchbox cars,” she said. Her family also acknowledges Santa in a colloquial way, and Christmas, as a whole, is essentially a moral holiday for her family. “We have told our children that Santa is an important part of the season, and he represents goodness and generosity,” Lydia said. “He doesn’t bring presents for our children, though.”

This December, Lydia is excited to light the menorah and play dreidel, which she and her husband jokingly refer to as their children’s introduction to gambling. “We play with Taco Bell sauces sometimes,” she said. “It’s so much fun!”

But even more than the festivities, Lydia is looking forward to a renewed sense of peace that she often feels after attending her church’s winter solstice service. “It’s a time to be quiet and still, and it usually lasts around thirty minutes,” Lydia said. “We end with a thoughtful walk through nature, our way lit by candles. I leave ready to receive the messages I need to receive.”

Cooking Food from Africa Connects Them to Home

Elizabeth Ongor is a resident of Wakefield who moved to the United States from Accra, the capital of Ghana, in 1987. While Elizabeth did celebrate Christmas back at home, it was very different from her more recent American celebrations. She didn’t grow up decorating a tree or hanging a stocking. “For starters, we didn’t have mantles,” Elizabeth said. “And Father Christmas gave children jam biscuits earlier in the season. We didn’t open gifts on Christmas morning.”

One of her fondest memories of the holiday season is the handmade dress that she wore to church on Christmas Day. “We picked out the material, and someone sewed it for us,” she said. “That was one thing that happened every year.”

When Elizabeth and her husband, Benjamin Ongor, moved to the U.S., they incorporated more American traditions into their holiday celebrations. Their daughter, Abigail, grew up visiting Santa at the mall and getting her picture taken with him. “Do as the Romans do,” Elizabeth said. “That’s how I feel about things, and I enjoyed Abigail’s childhood Christmases.”

Today, Elizabeth and her family prepare many of the traditional foods from Ghana for their holiday meals. They enjoy jollof rice, yams, and plantain. “Abby has a few things that she knows how to cook, but I help her with some of the other dishes,” Elizabeth said.

Abigail travels for work, so there are times when it’s just Elizabeth and Ben at home. While she embraces local tradition and loves her hometown, there will always be a certain degree of homesickness at the holidays. “There is a feeling of isolation when I realize that everyone is back home visiting. I do miss my whole family,” Elizabeth said.

It’s a Festive Time of Year for the Salomonskys

They Enjoy the Spirit of Giving

Debbie Salomonsky, a Virginia Beach resident, was raised in a Catholic family and always celebrated Christmas as the primary December holiday. Her husband’s family is Jewish, so he celebrated only Hanukkah until he and Debbie were together.

Throughout the years, Debbie and Richard have enjoyed many of the traditions from both holidays. They celebrate at least a few nights of Hanukkah each year. “When our children were home, we did our best to celebrate all eight nights,” Debbie said. “But we still light the candles, and my husband still recites the prayers.”

The couple decorates their home for both holidays and sends a combination of Hanukkah and Christmas cards. “We typically choose a whimsical card, and we try to do something charitable for our community in the way of service,” she said.

Debbie and Richard enjoy the festive feeling, the spirit of giving, and having family at home for the holidays. Those are the most important parts of the season for them. So, in the grand scheme of things, there really isn’t much difference in their traditions. “We celebrate the true meaning of the holidays, as well as incorporate our own values,” she said. “We celebrate in our own way, including all of our traditions from both families. We focus on the good things in each other, and we have made it work for forty years.”

After working long hours in October and November, Debbie is looking forward to some of the simpler, yet meaningful festivities in December. She will spend some time reflecting and honoring her loved ones, particularly her mother and sister who have now departed. She also plans to bake cookies with her grandchildren and serve the rolls that her own mother used to make. “Mom always told everyone that she made them from scratch, but they aren’t much more than frozen dough in cupcake tins,” she said. Like many of us, Debbie treasures the warm feeling of giving and appreciating the important people in her life, including those she has lost.

When we take inventory of the things that matter, we are often on the same page regardless of religion or the individual holidays we celebrate. There is more in this season that unites us than divides us, and meaningful moments are all around. Let’s remember to slow down and appreciate them.