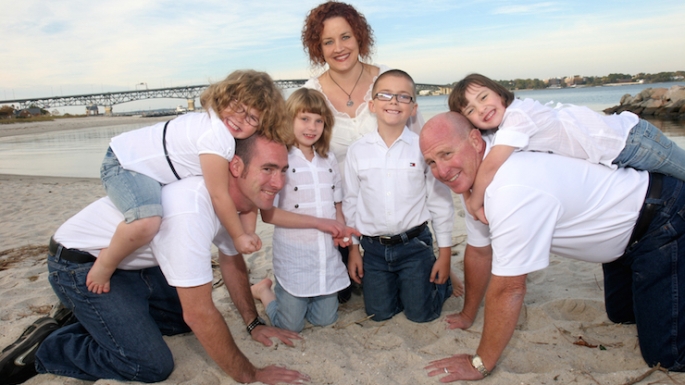 by Stephanie Allen
Published in Community
Rate this item
(2 votes)

After a successful battle with cervical cancer, Tracy LaGatta knew she would be unable to conceive a baby. She thought she had accepted that part of her life, but after marrying Clint Deardorff, her husband noticed that Tracy would become sad after holding someone else’s baby. He knew she wished she could hold one of her own.

Clint didn’t want to see his wife depressed, so he decided to do a little research into adoption. He knew Tracy would need all the answers before he brought it up, so he checked into options, learned how adoption works, and even figured out how they might pay the fees. Then he surprised Tracy with a romantic dinner over sushi and told her that he had found a way for them to become parents. Nearly seven years later, Clint and Tracy are the happy parents of two children, Cooper, 6, and Abigail, 3.

Once a family decides that they’d like to adopt, deciding which route to take is the next step. Should they adopt internationally or domestically, independently or through an agency, or through foster care? Independent adoptions may seem like an easier route. This is when the hopeful parents will reach out on their own to find a birth mother and negotiate the terms of the adoption with the help of an adoption attorney. Agencies provide additional services,  such as matching a suitable child with the right parents based on their needs.

In Virginia, more than 5,000 children currently live in the foster care system, according to the Virginia Department of Social Services. Over 60 percent of these children will likely be adopted by their foster families.

“The biggest challenge with matching children to families is finding the right fit,” said Anna Koehle, the branch director at Bethany Christian Services of Virginia, an international organization that provides pregnancy counseling, adoption, and foster care services.  “Another barrier that we run into is time frame. A lot of families want it to happen right now because they have that love and desire to parent, but it is a process.”

For three local couples, adoption means completing their families, and their stories are as unique as they are.

A CLOSE BOND
When Clint told his wife that he had found a way for them to become parents, Tracy was admittedly hesitant.

“I told him you go figure the rest out and then tell me when I can get excited,” said Tracy. “But the reality of that was I was very excited, and I went ahead and did some of my own research that very night because I wanted to know more.”

They met with staff at Adoptions from the Heart in Chesapeake to get more information and learned about open adoptions, which means that the birth mother would stay in touch with her child, even receiving pictures and regular updates on the child’s life.

Tracy and Clint were a bit nervous about pursuing an open adoption, but after meeting Melanie, the birth mother of their child-to-be, Tracy said she felt an instant connection. The nerves disappeared, and Clint and Tracy knew that this option would be a good fit for their family.

Their son, Cooper, was born in September 2009. Adoption laws state that the birth mother has up to 30 days after the baby is born to change her mind about the adoption, but Clint and Tracy had no fears. They decided to make the most of every moment they had with Cooper in those first 30 days. Melanie never changed her mind.

A couple years later, Melanie became pregnant again and gave Clint and Tracy the opportunity to adopt this child as well. They were thrilled at the unexpected surprise. In 2013, their daughter, Abigail, was born.

Their children call their birth mother “Mommy’s Angel,” the person who gave their mom the babies that she couldn’t have on her own. The family regularly visits Pennsylvania, where Melanie and her family live, so the kids can visit their two half-siblings.

“In the adoption world, we’re probably the closest family as they get,” Clint said.

A FAMILY BUSH
In 2005, Dan and Tracy Keller began their journey into foster care with the intention to adopt.

Tracy, the CEO of Girl Scouts of the Colonial Coast, said she found a “village” of people and professionals in foster care that helped and cheered for her and Dan during their time as foster parents. She said they were so helpful in keeping her informed of options and resources that might be useful as they cared for their foster children.

“This community has so many resources for parents that I’m pretty sure I would not have found on my own, or even knew existed, if I had not been a foster parent,” Tracy said.

For the Kellers, fostering was particularly difficult when it was time for their foster children to reintegrate with their biological families.

“Having to say goodbye to a child is probably the hardest thing a person would ever have to go through,” Tracy said. “But there’s a lot of good things that came out of it for the benefit of the children that we get to try to raise.”

Tracy and Dan were asked to take care of a family of five just for the weekend, even though their home was only certified for three children at the time. After that, they were asked to decide which children they wanted to continue fostering, but Tracy refused to make a choice. So the children were transferred to another home.

After a twist of events, Tracy and Dan were able to take in three of the five siblings once again. Later, after purchasing a larger vehicle so they could be certified for more children, Tracy and Dan took in a fourth baby. A unique aspect of their family is that all four of their children were officially adopted on the same day, which they celebrate on April 10.

Now, Tracy’s three girls—Maureen, 10, Ashlina, 11, and Divine, 13—are involved in Girl Scouts. Her son, Charles, 12, is a boy scout. The Keller family’s daily routine is just like any other family. “We just don’t look alike,” Tracy said. Her family doesn’t seem to fit the traditional idea of a family tree since her children also have “branches” in other directions to their biological families who are part of their lives as well, she explains. “We consider ourselves a family bush, not a tree.”

A HOPEFUL JOURNEY
The adoption process can be discouraging for those who have been anxiously waiting to provide a loving family for a child, but Ashton and Al Ralston are hopeful that the little soul meant to be their child is on his or her way.

Ashton, who works as a psychotherapist in Virginia Beach, always dreamed of becoming a mother. After marrying Al nearly two years ago, the couple tried to conceive naturally, but Ashton was later diagnosed with breast cancer and had to undergo treatment. Now that she is living cancer-free, the couple decided to pursue adoption.

Ashton began researching different ways to adopt. She learned about domestic and international adoption and decided that they might try an independent adoption, also called parental placement, as a first step. “[Parental placement is] where you find your birth mother through marketing, really, and then you have your adoption attorney that will help you with all the legalities,” Ashton said.

Unfortunately, Ashton and Al became victims of an “emotional scam,” where they met a woman online who claimed to be willing to have the Ralstons adopt her twins, only to disappear when an attorney became involved. Ashton was devastated and couldn’t understand how anyone would want to cause such emotional harm in this way.

Ashton and Al are still looking forward to becoming parents, though they are more cautious. Now, they are going through a law firm that will help find the birth mother and verify the pregnancy before presenting it to the adoptive parents. Usually the firm can match clients with a birth mother within six months.

“I have dreamed of being a mom my whole entire life,” Ashton said.  “Al and I just really want to love a child and bring a beautiful soul into this world.”

There are children all over the world who need a loving family. Anna Koehle suggests anyone considering adoption as a fit for their family start by reaching out to agencies and asking questions, attending information meetings, and even researching online. Families who are waiting can also have the opportunity to meet with other families who have successfully adopted to learn more about the process and receive encouragement.

“What you need to adopt,” said Anna Koehle, “is a home that will provide care and warmth and love for a child. That’s all it takes. It doesn’t take a lot of money, just a heart for a child in need.”

Stephanie Allen is the Content Manager & columnist for Tidewater Family Plus. She is a proud Navy wife and mom, a writer, blogger, success coach, and a volunteer mentor for military spouses. Follow her blog, "Choose Happy," featuring lifestyle, wellness, and career tips for do-it-all moms.