Women to the Rescue

Read about local women who save animals in trouble.

They live all around us, even though we don’t see them daily. Horses grazing in fenced green pastures. Dolphins and sea turtles gliding through foamy ocean waters. Deer and raccoons roaming sun-dappled woods. In our minds, they live a life of freedom and frolic.

What we don’t envision are the real-life stresses and strains that can endanger any animal’s life. An innocent horse is sent to auction, only to face the slaughterhouse instead of a good home. A sea turtle skimming the surface encounters fishing line, becoming entangled in the fight of its life. A fawn separated from its mother runs scared, too young to survive on its own.

Fortunately, these creatures have angels watching over them—caring people in organizations that rescue and often rehab animals and wildlife so they can be released back into their native habitat. When rehab and release is not possible, they find homes in educational, recreational, and therapeutic settings.

Here we meet three organizations dedicated to helping Mother Nature protect and provide for the creatures that walk, crawl, fly, and swim all around us.

Circle A Home for Horses Makes Horses and People Happy 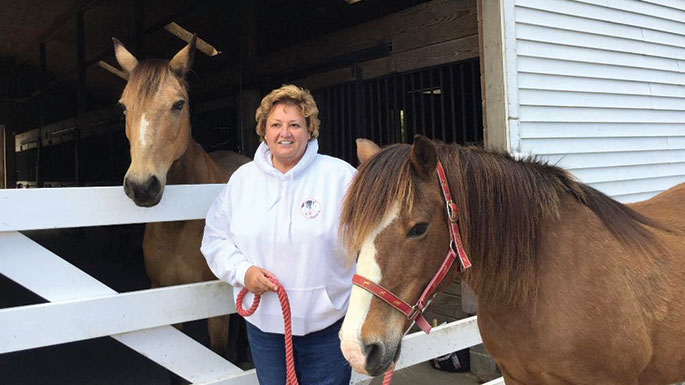 The barn was quiet and still but not for long. Ears perked up. Heads turned toward the barn door. Legend and Gia were the first to see Alicia Mahar as she walked toward them at the Circle A Home for Horses farm in rural southeastern Virginia Beach.

“Look at you, handsome,” she said to Legend, a 20-year-old Buckskin who has lived there for four years. His BFF, 22-year-old Gia, is a Shetland pony who gave birth at the farm in April 2017. Both are rescues, saved from dire situations.

Since 2014, the nonprofit Circle A has rescued 600 horses from slaughterhouses and other threatening existences. Some were neglected and emaciated. Some were racehorses with injuries that ended their careers. Many were just old and unwanted. Some of the horses have found forever homes with adoptive families, while others retired on the farm. A team of seven part-time staff and 10 dedicated volunteers, aided by a veterinarian and dentist, get the horses back in shape and oversee their daily care.

Alicia’s first rescue was in 2005, when she became aware of a weekly livestock auction in Pennsylvania. The mare’s name was Hope, and she became the guiding light for the farm’s horse-and-children therapeutic program that now serves the Barry Robinson Center for emotionally challenged, at-risk youth in Norfolk.

“I have never seen a horse that skinny or in such bad physical condition that she had to swing her back leg out to walk,” Alicia said. “She was like a big teddy bear and let all the children love on her.”

Located on 16 acres in Pungo, Circle A also works with Tidewater Youth Services to identify at-risk young people who can benefit from equine therapy. The farm’s therapeutic program mirrors its mission and motto: “Where horses, hearts, and healing come full circle.”

“It’s amazing how a horse helps a kid open up, as opposed to what typically happens in a clinical office setting,” said Alicia, who is working toward a master’s degree in trauma-focused mental health.

“When we get the kid and horse together and everyone is comfortable, the horse does all the work,” Alicia continued. “Children and adolescents with depression, anxiety, low self-esteem, autism, substance abuse, and PTSD show positive outcomes using equine programs.”

Covid restrictions have kept the farm from hosting guests or fundraisers, but Alicia is hopeful that soon changes. She’s planning summer day camps for ages 6 and up, as well as the annual fall fund-raiser, which is a fun day of horsing around.

The farm typically has horses available for adoption, and there is always a need for volunteers to feed and groom horses and muck the stalls. “Rescue rider sponsorships” from $10 to $500 a month provide grain, medication, and training for the 30 horses and dozens of ponies now at the farm. Donations such as paper towels, hand soap and sanitizer, trash bags, carrots, and apples are always welcomed. Details on ways you can help can be found at circleahome4horses.org.

“Words hardly describe the magical influence horses have on humans, and their ability to make us want to be better individuals,” Alicia said. 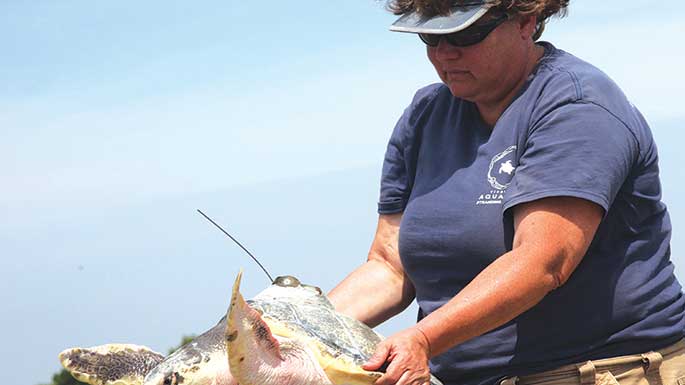 The next time you toss a face mask on the ground or throw a plastic bag in the trash, first think about the sea turtles and other marine life that could become entangled in it—or maybe even try to eat it. Instead, cut the straps on the mask and dispose of it properly. And take reusable bags for shopping needs.

That’s what environmentalists like Susan Barco hope people will increasingly do in their everyday lives.

“During my lifetime, I have seen multiple marine mammals and sea turtle populations decline to the point of imminent extinction,” said Susan, a marine biologist and senior curator with the Stranding Response Program at the Virginia Aquarium and Marine Science Center near the Oceanfront in Virginia Beach. “Most of these populations are in trouble because of human activities, and their decline could have been prevented.”

In 2019-2020, Susan and the center’s rescue team worked with 55 live sea turtles and two live marine mammals. One mammal, a gray seal, was tracked south to Florida where it was rehabilitated by another facility. Of the 55 sea turtles, 37 were released; two are still in rehab and slated for release soon; one was not suitable for release and was sent to an aquarium in Alabama, she said.

Her most memorable release was a juvenile humpback whale caught in fishing gear off the ocean coast of Virginia Beach. “Watching that whale swim away gear-free was a great feeling,” she said.

If you see a live, injured or stranded sea turtle and other marine mammal, you can call the aquarium hotline at 757-385-7575. It helps to have photos or video from a respectable distance, Susan advises, to determine the animal’s species, size, and condition.

Before the pandemic, the aquarium’s rescue operation relied heavily on volunteer assistance, and it’s hoped recruitment and training for those positions can start again soon. Grants, contracts, and donations fund the program; details can be found at virginiaaquarium.com.

“The more I work with marine mammals and sea turtles, the more I appreciate their amazing evolutionary adaptations and individual personalities,” said Susan. 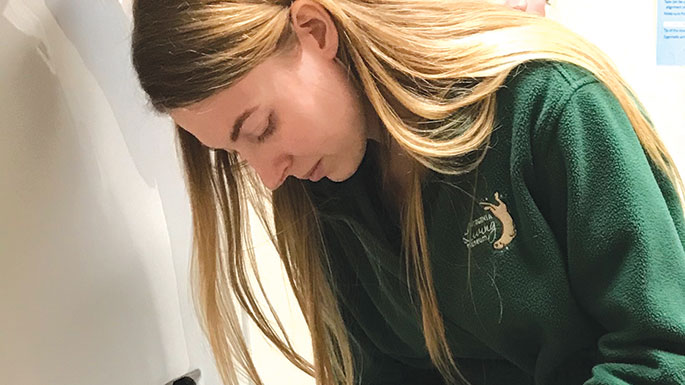 While the Virginia Living Museum is not actually an animal rescue or rehabilitation center, it is home to many previously injured or otherwise non-releasable wildlife, said Dr. Kelsey Hayden, lead veterinarian at the educational museum in Newport News.

The facility, however, does see to the medical needs of wild animals that were illegally kept as pets, as well as animals that suffered severe injuries and those unable to survive in the wild again. Some of the animals include the museum’s three-legged bobcat called Sarge, a three-legged coyote pup nicknamed Achilles, and a one-winged pelican known as Trooper.

“By providing a home for native wildlife and by helping injured wildlife, the museum allows the public to learn about our impact on wildlife and to foster a sense of love and desire to protect the animals that we share this world with,” Kelsey said. “Animals are incredibly resilient. I have seen animals with injuries that would incapacitate a person sit up and act as though nothing were wrong. They are truly amazing.”

On call 24/7, Kelsey works in an environment that includes a hospital/holding room for animals recovering from illness, anesthesia or surgery; standard exam room; surgical suite; X-ray and ultrasound capability; and a pharmacy full of medications.

Once an animal is treated and does not require daily medical care, it’s placed with a licensed rehabilitator, so it’s given the best chance of returning to its normal behaviors and home in the wild. Sadly, that’s often not possible, Kelsey adds.

“Unfortunately, there are cases where the animal is too injured or debilitated to be saved,” she said. “I stay in touch with the state wildlife veterinarian to ensure we are making the best possible choices for the animals in our care.”

The living museum relies on donations to maintain its medical care for native animals, and events such as the Living Otter Ball are part of its fund-raising efforts. In addition to supporting events, groups and individuals can select and sponsor a special animal’s care. Veterinary specialists interested in wildlife medicine are also welcomed to volunteer. More details are available at thevlm.org.

“I truly want to make a difference in the lives of animals, no matter how small that is on a global scale,” said Kelsey. “I take care of animals that very often have no one to care for them. Many of these animals may not be the most charismatic but are no less deserving of love and respect. Human health, plant health, animal health, and environmental health are not independent of one another. We thrive together.”