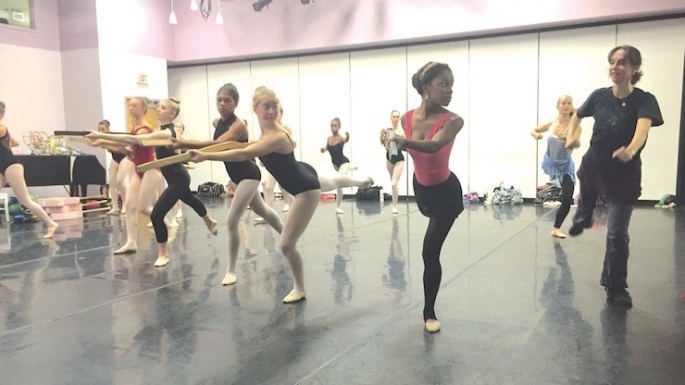 by Stephanie Allen
Published in Enrichment
Rate this item
(3 votes)

A chaotic scene awaits in the studios of Todd Rosenlieb Dance in downtown Norfolk. Young ballet dancers and parents pack the tight hallways, bustling around each other as one mom fastens bobby pins into her ballerina’s hair and another adjusts her child’s leotards. Music flows from three open studio doors, and instructors have to raise their voices to be heard as dancers whirl past the doorways.
For local dance students, the Richmond Ballet’s December production of The Nutcracker here in Norfolk gives them the opportunity to work alongside professional dancers and gain valuable experience in the performing arts world. It’s gives them the chance to show off their talent and enjoy the thrill of performance. It’s also tons of fun.

The original story of The Nutcracker, written in 1816 by E.T.A. Hoffman, follows the story of a young girl and her favorite toy, a nutcracker doll that comes to life in a whimsical Christmastime tale complete with mice, dancing flowers, a Snow Queen, and more. The story was later adapted as a ballet by the Russian composer Pyotr Ilyich Tchaikovsky and has since become a classic ballet production around the globe.

The Richmond Ballet’s rendition of The Nutcracker has changed little since Stoner Winslett, founding artistic director for the Richmond Ballet, choreographed her own version in 1980. A writer for the New York Times called it one of the “most perfect” of over 20 versions she’d seen, due to the intricate attention to detail and the consistency of the story. For the past three years, the Richmond Ballet has expanded its acclaimed performance to Norfolk, where local students have a chance to partake in a professional production.

GAINING CONFIDENCE
In Studio 3, the music is paused as Cecile Tuzii, upper division principal of the School of Richmond Ballet, instructs two groups playing Regiment Soldiers on the correct way to hold their wooden rifles. “The rats have forks to fight you,” she explains and shows them that the rifles should remain stiff in their hands, not wobbling about as they march along their makeshift battlefield.

Jennifer Hazelwood’s daughters, Elizabeth and Jessica, have participated in The Nutcracker for all three years it’s been performed in Norfolk. For the upcoming December performance, the girls landed roles as Regiment Soldiers. Jennifer, who owns First Landing Dance Center with her husband Wayne, is proud to see both her daughters and nine of her own students performing in this year’s production. She loves to see her students gain confidence.

“I’ve seen children that have had insecurities grow so much and become people who aren’t afraid to be themselves,” Jennifer said. “I believe that’s what performing arts does for children. It’s essential.”

Studying ballet requires commitment. Most weekdays when school ends, Elizabeth, 16, and Jessica, 14, practice dance three hours at the Governor’s School for the Arts. They also practice at their parents’ dance studio a couple nights a week and, of course, rehearse for The Nutcracker at TRDance on Sundays. Even with such a busy schedule, Jennifer says her daughters keep up their grades and are happy to be participating in The Nutcracker for the third year in a row.

After 30 minutes of rehearsal, Cecile is ready to allow her students to practice the routine with music. There are still some rough patches to smooth out, but after the third time through, the pieces are beginning to come together. “Keep your rhythm,” Cecile instructs. “It’s more important than anything.” Even the way the dancers “die” in battle is rehearsed thoroughly, each one falling in a very precise location and position.

These students have worked hard today, and sweat glistens on their foreheads as they try to catch a breath in between jumps and spins. Finally Cecile announces, “That’s enough for today,” and dancers scurry over to their bags lining the wall to change out of their point shoes. Cecile commends them on their hard work, and the dancers thank her before they head out the door, giggling and chatting.

MENTAL DISCIPLINE
Once the Regiment Soldiers have cleared out of Studio 3, a smaller group steps inside and pulls out several portable barres to begin their warm-ups. This group will be performing the Chinese attendants scene in this year’s production. The last student to walk in is Brexdyn Le Dieu, 17, who has also performed in the last two productions. He takes his place at the barre and immediately follows along with the instructor without hesitation.

For Brexdyn, the chance to express himself through dance is important. He started out learning to tap at age six and has studied a wide variety of dance styles ever since. He says that he’s more organized and mature due to his training, and he would love to pursue dance professionally. “I think the world is just so colorful and everything that we see is an artistic form, so we need to be a part of that,” he said. “Everything that you put into your art is you.”

Judy Jacob, director of The School of Richmond Ballet, believes performing arts is a way to gain “real physical and mental discipline.” Participating in something outside of a student’s academic education provides inspiration and direction, even if a student doesn’t plan on pursuing dance as a career.

Judy says students she taught years ago still send her letters and emails of gratitude for their years of performance. “They’ll say, ‘I still think back to my dancing days and how it shaped me as a person.’” Judy said. “Those are the best kinds of communications—when you’ve impacted these people in a positive way, and [dance is] not even their profession.”

Ballet not only impacts individuals, but also brings families and communities closer together. Parents must be willing to become an active participant in their child’s dance experience, providing transportation to rehearsals and helping out backstage when necessary.

Costumes are particularly intricate on the set of The Nutcracker, and many students need help getting in and out of costumes. Parents also share in keeping young dancers safe at performances, guiding them back to their parents’ vehicles after the show. With so much going on backstage and during the show, parental involvement is needed to keep things running smoothly.

Jennifer Hazelwood also points out that while competitions can be fun for dance students, a production like The Nutcracker offers the opportunity for students to make new friends and socialize. “You see kids all in different dance teams come together and work on this one project, and it brings a sense of community to the Hampton Roads area and erases any kind of competition,” she said.

Richmond Ballet held a single-day Master Class in August with Todd Rosenlieb Dance, and close to 100 students from all around Tidewater participated. Judy said the number of students auditioning for their Norfolk performances has grown each year. This year over 150 auditioned, more than ever. She hopes the success of the Master Class and The Nutcracker performances will drive more ongoing activities in Tidewater throughout the year.

“We are so pleased to be…drawing students from as far away as the Outer Banks and coming together to do this production again,” said Judy. “We’re just really excited and look forward to doing the performances.”