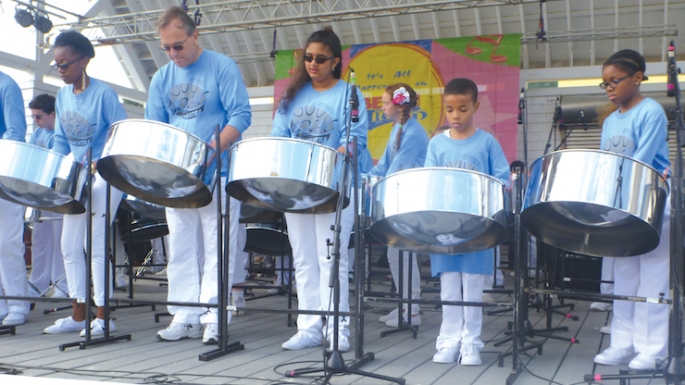 by Stephanie Allen
Published in Enrichment
Rate this item
(4 votes)

Music reverberates throughout the second floor of the Attucks Theatre in Norfolk one Saturday morning as eight young students stand behind steel drums, carefully searching for the right notes to play. Their instructor, Brian Hunt, plays at his own drum, counting out the tempo for his students loud enough to be heard over the music. Occasionally he steps away from his drum to stand behind a student and offer corrections or to clap out the rhythm for the rest of the class.

“Good job, you got it!” says Brian as he walks around. Smiles creep onto the students’ faces as they realize they’re playing the right notes. Some even nod their heads along with the music as they gain confidence in the song, which very quickly becomes recognizable as “Amazing Grace.”

According to Brian, this is the very first time the students have attempted to play the song, but no one would ever know it. It’s clear that the students want to do a good job. Though their faces are sometimes lost in concentration, they’re enjoying every minute of their time behind the drums.

Welcome to the tropical sounds of the Mosaic Steel Orchestra.

CARIBBEAN ROOTS
With roots in the Caribbean islands of Trinidad and Tobago, the steel pan gained popularity in the 1930s as a street instrument. The drums, which come in all different sizes, create different tones, such as tenor pans, double seconds, and guitars. The inside of the drums are indented to create the desired notes, which are labeled on the indent for pannists, or players of the steel pan, to easily find them.  The end result is mesmerizing music that some say sounds like sunshine.

Dr. Anthony Hailey, founder of the Mosaic Steel Orchestra, first encountered a steel pan while he studied percussion at East Carolina University. He later met Ellie Manette, known as the father of the modern steel pan, and worked closely with him as Dr. Hailey pursued his Master’s degree at West Virginia University. He moved to Tidewater in 1999, and a year after receiving his doctorate degree in 2005, he started the Mosaic Steel Orchestra.

“I worked in the area for another organization, and I started noticing things that I could do to better help children,” said Dr. Hailey.  “I didn’t have much when I grew up, so this is a way to give back.”

Mosaic Steel Orchestra offers low-fee or no-fee classes for youth and adults. They also hold two programs at Douglass Park Elementary School in Portsmouth. Since the orchestra was established, they have played various local performances throughout Hampton Roads and traveled to out-of-state shows in Ohio, Delaware, and Maryland. Once they were even invited to compete at the International Panorama held in Trinidad and Tobago.

Steel pan groups like Mosaic are gaining in popularity, especially with younger students, who are learning important skills like professionalism, responsibility, and teamwork. Plus, they are experiencing the excitement of performing on stage with their friends and showing off their hard work.

EXPRESSING FEELINGS
Tamani Brown’s favorite activity in school was playing football, but when he was nine years old, he learned he had a medical condition that prevented him from playing football any longer.

“I was really disappointed because that was my favorite sport,” he said and started looking for a new activity to participate in. One day on his way to school, he saw a truck featuring the Mosaic Steel Orchestra and asked his grandmother if he could try it out. Two years later, he’s found a new passion in playing the steel pan, and he’s excelling both in the orchestra and academically.

During class Tamani stands at his double seconds glancing between Brian and his drums as he plays his part in the song. Though he struggles with ADHD, playing the steel drums “is a good way to express my feelings and keep calm,” he said. He hopes to continue with the steel drums throughout high school and earn a scholarship to become a police officer one day.

Dolores Charles’ two grandsons, Kris, 12, and Amari, 13, have played with Mosaic for the past six years. She says she’s seen tremendous growth in both of her grandsons during that time.

“Kris was working with three drums by himself at one time,” said Dolores. “We’re amazed at how fast he learned at six years old, and now he’s moved on to something else!”

The steel orchestra plays a variety of music like popular radio songs, band music, and classics. “I like learning the different songs,” said Amari, whose favorite song to play is the 2015 hit single “Hello” by Adele. “We get to travel and do concerts and get our name out there.”

Their concentration in the steel orchestra has taught the boys a lot of discipline, said Dolores. At school, Kris is part of the band, and Amari is involved in technology courses. Dolores loves that the orchestra gives her boys several opportunities to learn something new every day.

“Whenever you have a song in mind as an instructor, to hear what you were thinking is amazing,” said Brian. “The kids are playing, and they’re really into the music, and at certain moments it’s perfect. It’s just perfect.”

MORE THAN MUSIC
Being part of the steel orchestra also helps teach the kids about professionalism and responsibility. Each year the Mosaic Steel Orchestra participates in the Virginia International PAN Fest, which Dr. Hailey helped kick off with Virginia Arts Festival in 2003.

“[Performing] improves their overall attitude and behaviors,” said Dr. Hailey. “They’re all of a sudden a part of something, and the music doesn’t happen until they strike the instrument. There’s something about a group of people coming together and creating that sound together.”

Dr. Hailey says the students love to help each other out with their parts. The adult groups even love having the kids around and work well with them during rehearsals and performances. The youth and teens have developed a deep understanding of their role in the orchestra and know that if they don’t play their part, the orchestra won’t succeed as a whole. They have also learned how to behave in public to best represent themselves and their group.

“[Steel pan] gives you confidence and focus,” said Brian Hunt. “You have to focus on your job. You have to be punctual. In each band, it’s a job, you have a responsibility, and you have to do your job.”

The name “Mosaic” comes from the idea of many different kinds of people coming together. As each group of adults, teens, and youth come together to perform, a variety of races, socioeconomic classes, cultural differences, genders, and ages are represented.

“I want this organization to represent what society should represent,” said Dr. Hailey. “When you bring this all together and put it on one stage, people say that’s a beautiful thing.”