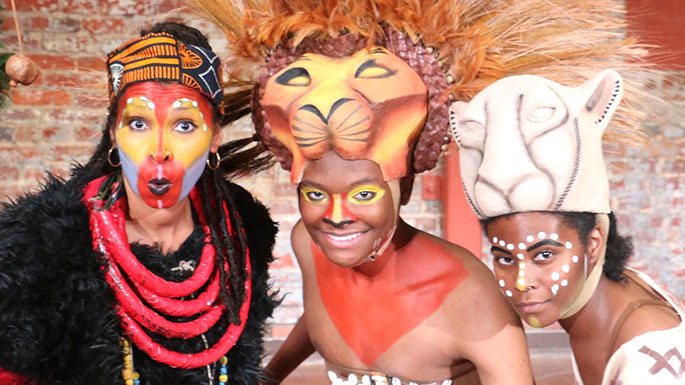 The Magic of Theatre

Local leaders are guiding our youth toward successful lives through the magic of theatre.

Something magical happens when you sit in a hushed auditorium moments before a show begins. The curtain opens, perhaps a few notes of music rise up from the orchestra pit, and soon you are immersed in an imaginary world where actors, dancers, singers, and backstage crew work together to create an evening of magic that’s just for you.

Ever since audiences in Ancient Greece sat in amphitheaters and watched masked actors tell tales of heroes and villains, performers have been entertaining the masses on stage. Locally we’re blessed to have a number of theater companies bringing live theatre to venues year round.

Every actor and performer on stage was once a young boy or girl who attended a performance, and that moment changed their lives. Let’s meet a few local individuals who are passionate about introducing the magic of theatre to local youths.

Tanya Rollins Shadley: In the Limelight

Graduate of the Governor’s School for the Performing Arts

Tanya Rollins Shadley has had a microphone in her hand since she was five years old. At age eight, she was part of the cast for a major production at Norfolk State University. “I started singing in the church choir when I was five and told my parents right then and there, ‘You can hang up the doctor thing. I’m going to do this the rest of my life,’” said the 41-year-old Norfolk native, laughing as she talked.

During high school in the 90s, Tanya attended the Governor’s School for the Performing Arts and graduated with honors from Maury High School. After attending college and teaching theater at a Christian school, she launched TRS Productions, or “Broadway in V-A” as she calls it, in 2006. She’s been singing and acting her way through life—until lately.

For the past three years, Tanya has stepped off the stage and into the production role, giving local kids a chance to experience the limelight and love for live theater.

Now her life is all about TRS Kids and its theatrical workshops for ages 4 to 17. Interest keeps growing—from 12 students the first year to 40 who auditioned and presented the Broadway musical “Seussical JR” last month. Tanya is in the process of securing a year-round home for the theater group.

“My dream was New York, and then I started teaching and doing things in the community,” she said. “I have to stay home. I’m Norfolk born, and I can see the impact I can have here.”

“My job is to help a child develop that imagination,” he said. “You are going through the jungle, what’s over there? You can take something on the page and bring it to life. It opens a new world.”

Since launching Hurrah Players, a family dance and theatrical company based in Norfolk, in 1984, Hugh has mentored thousands of young people through classes and summer workshops. Some have gone onto professional careers—like Adrienne Warren, who made her Broadway debut in 2012 and received a Tony Award in 2016.

“Socially, you find a community within an acting company and meet people who have your same passion,” said Hugh, who previously taught performing arts at Old Dominion University.

Mitchell Maguire of Chesapeake is one of those Hurrah Players students now climbing the professional ladder. At age 10, he took vocal lessons to improve his breathing and to strengthen his vocal cords, which were diagnosed with a rare paralysis of the muscles that move the cords. His teacher was Cathy Francis, music director for Hugh’s company at the time and a teacher at Norfolk Collegiate, where Mitchell attended school. She suggested he take Hurrah Players classes.

In May 2011, the Hurrah Players held a Tony-watch party. Mitchell remembers it was the first time he had seen the Tony presentations and had this moment when he knew “…that’s what I want to do.”

“Theater, in general, has taught me good social skills, and performing has instilled confidence, taught me to talk in front of people,” he said. Mitchell still remembers the first Hurrah play he auditioned for—“Halloween, It’s for the Birds,” written by a local playwright and done with bird costumes that Norfolk International Airport donated after they had used them in a commercial.

“It was the oddest, silliest little show,” said Mitchell, a senior majoring in musical theater at Coastal Carolina University near Myrtle Beach, S. C. This summer, he did outdoor theater, “Unto These Hills,” a drama that tells the story of the Cherokee at Cherokee, N.C.

Before acceptance to CCU, Mitchell applied to 22 colleges and did in-person auditions at 17 of them. It was not unusual for 2,000 applicants to apply for 10 to 20 spots in any one college theater program, according to his mother, Kathryn.

“He has had to work really hard in a field that is already difficult,” she said, adding that acting taught him time management because he juggled rehearsals, classes, and homework. “It also taught him resilience because performers face rejection when they don’t get the part they want.” Mitchell, now 21, applies that hard-work ethic to everything he does, not just theater. He hopes that same determination gets him to New York City, where he can pursue auditions for performances in the Big Apple and elsewhere. Eventually, he wants to be a director/choreographer.

“In the meantime, I am happy just singing and dancing and acting,” he said.

In August, nine-year-old Terrence Patrick played the role of Horton in TRS Kids’ “Seussical JR,” the story of friendship, loyalty, and love. Horton and Gertrude band together to save the Whos, free Horton, and restore peace and unity to the Jungle of Nool.

While rehearsing, Terrence formed his own loyalty and love for the other 39 kids who showed up nine hours week after week to make the production come to life.

“I really like that everyone gets a chance to do something that they want to do,” said Terrence, who likes to sing and dance and try anything new in the performing arts. “I like being on stage because people come from all different places to see us perform. Being on stage has taught me to be ready whenever something goes wrong so that if the song goes off, you make up something up, and never say No! I am myself, and I can accomplish anything if I try.”

Amaejah Alexander, 12, agrees. “Anything is possible if you put in the hard work,” she said.

TRS Productions has no permanent home, but Tanya is talking to Norfolk city officials about possible space at a parks and recreation site. A $10,000 grant kept the company afloat during the pandemic and allowed the kids to move from in-person to virtual and back to in-person productions. “I need funding and a building to do what I want to do, and I’m not giving up,” said a determined Tanya.

In the meantime, she’s helping high-school age kids in her group write applications and prepare auditions for the Governor’s School, which she says is still like family to her.

“These kids are like the little Whos in Seussical saying, ‘We are here, we are here,’” said Tanya. “I know what Governors School was for me, and I want these kids to have that same experience. I see these kids’ faces light up when we talk about it.”

Helping kids learn lifelong skills that mold them into well-rounded adults is the payoff for people like Tanya and Hugh. “This is not just about creating artists. It’s about making well-rounded individuals,” said Tanya. “I’ve watched these kids go from talking about being an actor to talking about being a businessperson. The same principles apply: Put your best foot forward whether you’re in the board room or the audition room.”