The Imaginative World of Theatre

Asher Sullivan, 15, of Virginia Beach, discovered his love for the theatre when he was eight and his family was living in Florida. One of his brothers had signed up for a children’s theatre class, but changed his mind, and Asher volunteered to take his place. At the end of the program, the students put on a pirate play—and Asher was hooked!

Hampton Roads has many opportunities for children and families to take part in local music and theatre performances. The performing arts offers many benefits to kids, such as improving self-esteem, confidence, and more. Most theatre programs welcome parents’ help and involvement, so it becomes a family affair. Asher’s dad, John Sullivan, is also a theatre aficionado.

“Entertaining others brings something to our lives,” said John, who got into acting at the Little Theatre of Virginia Beach when he was 28. He performed in a lot of local theatre before taking a break when his kids were little. A decade later, John is back at the Little Theatre of Virginia Beach. He’s looking forward to his upcoming performance in The Rainmaker, when Asher will see his dad on stage for the first time.

Asher has studied at The Actors’ Place in Virginia Beach, which was established in 1988 by Virginia Beach stage and film actress Sylvia Harman. Keith Flippen took over ownership in 2006 when Sylvia retired.

Besides focusing on the artistic growth of actors, Keith said, “We deal with the reality of the business. Students receive a solid grounding in good technique and get business advice from instructors who are working regularly in the field.”

Asher enjoyed the acting class he took at The Actor’s Place, which enabled him to receive a lot of individualized attention. “My teacher was nice and always had positive things to say,” Asher said.

Asher began to get more involved in drama during high school. “It was kind of hard when you first try it,” Asher said. “I was quiet and nervous, but it gets easier.”  Drama in high school is very welcoming, he said. “We’re all together. It’s a family and they are very supportive.”

When Asher auditioned for his first high school play—It Was a Dark and Stormy Night—he got the part of understudy. The regular actor dropped out, so Asher took his place. “It was a surprise,” Asher said. “That’s when I learned that the show must go on.”

John was excited to see his son on stage: “I was excited for him, but nervous for him, too. I know what it can be like. To see him on stage, I well up with pride. I’m happy for him. It’s great to see. Part of me wants to jump up and say, ‘He’s my boy.’”

“He’s got a memory like an elephant,” John continued. “Kids that age are like sponges. He soaks it up and gets it down.”

Asher ended up performing in three high school plays in a row. He’s grown a lot as a result of his involvement in theatre, he says. “When I joined drama, I was not as confident. Now I’m confident in what I do.  I’ve learned to step out of my comfort zone. You meet all sorts of people that you wouldn’t normally associate with, so you learn to be more tolerant with people.”

Asher likes the way acting allows you to experience other people’s lives. “When I’m acting,” Asher said, “I can be someone other than me. I can be a sorcerer or Al Capone. It’s nice to try different things and do things that you’re not usually doing in everyday life.”

Hugh Copeland, artistic director and founder of Hurrah Players, Inc., of Norfolk, has seen kids become transformed through their work in theatre. “It harnesses their energy and puts them more in tune with their imagination,” he said. “Einstein said imagination is more important than knowledge.”

Hurrah Players, which was founded in 1984, is “Virginia’s leading family theatre company,” according to the website. Its mission is “to inspire and empower the Hampton Roads community by providing affordable musical theatre education and family-friendly entertainment.” The company’s name came from Hugh’s name—Hugh R. Copeland—hurrah, Hugh explained. He stresses that Hurrah Players is not just a children’s group. It’s for all ages.

The company recently purchased an additional building, now named The Hugh R. Copeland Center, in the new Granby Street arts district. While not replacing their home on St. Paul’s Boulevard, the new building will provide room for a permanent scene shop, added classrooms, and a rehearsal studio.  The Perry Family Theatre will also move there—perhaps as early as this summer.

Chesapeake resident, Ben Branigan, 14, got involved with Hurrah Players through a summer camp seven years ago. The Hickory Middle School student loved it so much that he’s been taking classes ever since. Musical theatre, tap, jazz, hip hop, and a vocal class—his current class list is long and so is his excitement for Hurrah Players. “Before I joined it, I was kind of a shy kid, and now I’m very social,” he said. “I’m great at public speaking because of Hurrah.”

Ben said he’s grown because of his time at Hurrah Players. “I’ve definitely become a better actor, singer, and dancer because of their help,” he said. He said the choreography teacher has helped his flexibility in dance, and the vocal teacher has improved his singing voice.

He’s grown emotionally, too. “I made so many new friends,” Ben said. “Everyone is very open and welcoming. When a new student joins the group, we try to make them feel at home, so they will like the classes, want to stay, and audition for shows as well.”

Theatre brings out the best in people, says Hugh, and it encourages everyone to work together. It’s like t-ball, he says: “Players appreciate the project, make the commitment, and become responsible.”

“The kids realize it’s important to be challenged,” Hugh continued. “You learn lessons in life. You have to work together.”

Jessica Pinsky, managing director of Children’s Theatre of Hampton Roads (CTHR), agrees with John Sullivan that children are “impressionable sponges.” That’s why it’s so important to create art that’s just for them, she said: “Something that they don’t just watch, but experience. It’s nurturing to the imagination.”

“Theatre is an incredible teaching tool,” Jessica said. “It’s a way for kids to enjoy themselves while being taught a lesson or a moral. Reading a textbook might not transport them to the Middle Ages, pyramids. or outer space, but theatre can do just that.”

Founded in 2005, CTHR is a professional troupe of adult actors who perform a series of shows each season at local schools, libraries, and arts venues. Jessica said that their objective is to develop original, interactive, imaginative experiences that are affordable, accessible, and memorable to audiences of all ages.

Theatre is even more important in this age of technology and social media, says Jessica. “The ability to interact with each other in a real way [is becoming lost],” Jessica said. “Art is a way to express feelings and ideas, to communicate.”

What makes theatre unique, says Jessica, is it incorporates other arts, like musical, visual, written, and movement—and it tells a story.

CTHR often invites audience participation, Jessica said. “We ask questions or advice, for ideas, or simply have them make sound effects. We re-trained many children who were used to sitting in a dark movie theater, watching actors on a screen.”

Anything can happen in live theatre, Jessica says. “Kids adore that. They thrive on spontaneity, and love to be surprised as much as they love to figure things out before the characters do.”

There’s nothing quite like talking to a child after seeing her first play, says Jessica. Children, like adults, have different ways of thinking. Some kids are enamored with the spectacle of a show. “They want to touch the costumes and the set, step into the world we create, and speak to the characters—not the actors,” she explained. “Their curiosity and complete suspension of belief takes them to a place that many adults can’t go anymore: the imagination.”

Some kids are technical thinkers, Jessica explained. “They want to know how we speak in different voices, operate puppets, paint backdrops, write the script, and do pratfalls.”

Other children silently hand their program over to be autographed. Then they shyly ask for a hug or a high-five, Jessica said. “Their eyes shine with excitement at this new experience called ‘theatre.’” Just as kids need to learn literature and science, she says, they need to explore the imaginative world of theatre.

Mary Ellen Miles is a freelance writer who lives in Virginia Beach. 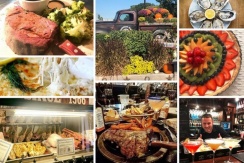