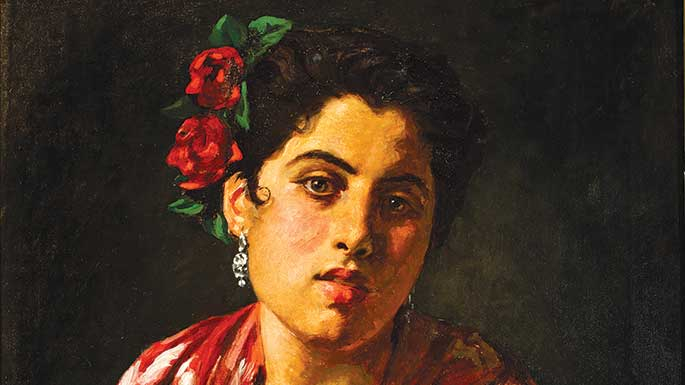 by Amber Kennedy
Published in Enrichment
Rate this item
(0 votes)

In 1872, a young, unmarried American woman set off for Madrid in hopes of communing with the old masters in her quest to define her own style. In every way defying the expectations for 19th century women, 28-year-old Mary Cassatt aimed to discover the techniques of the Spanish masters while making a name for herself as an artist.

One of Cassatt’s paintings from this period makes its stateside debut in “Americans in Spain: Painting and Travel, 1820-1920,” on view at the Chrysler Museum of Art through May 16. The exhibition explores a pivotal moment when American artists and their European counterparts flocked to Spain to capture its scenic charms and seemingly exotic customs.

Co-organized by the Chrysler Museum and the Milwaukee Art Museum, the show features works by Cassatt, William Merritt Chase, Robert Henri, John Singer Sargent and others alongside their Spanish contemporaries and the country’s old masters.

Given the challenges of travel during COVID, the show offers a rare opportunity to see works on loan from international museums like the Prado Museum in Madrid and the Musée d’Orsay in Paris.

From an early age, Cassatt learned travel was the best teacher. Born to an upper middle class Philadelphia family, Cassatt visited Europe as a girl and was exposed to the fine art of the day. Her family objected to her pursuit of a career in art, but Cassatt determinedly sought instruction. At the time, women were typically not allowed to use live models and were not admitted to many of the world’s finest art education institutions, so she traveled to Europe with a plan to study on her own.

Like many of her peers, Cassatt set off for Spain to study the works of the old masters, beckoned by the opportunity to study at the Prado. Up until the late 19th century, it was rare to find Spanish old master paintings in American collections. The selection on display at the Prado left many, including Cassatt, overwhelmed.

She established a studio in Seville, where she painted figural works that demonstrated the influence of Francisco Goya and Bartolomé Esteban Murillo, infused with her own command of painterly realism. She worked diligently on canvases depicting figures drawn from modern Spain, including young women in the contemporary dress with flowers in their hair and resplendent bullfighters.

The works she created in this period garnered some acclaim, with the Philadelphia Evening Bulletin writing of her early Impressionistic style, “Every touch of the brush is ruthlessly exposed.” The painting on display at the Chrysler, “Spanish Girl Leaning on a Window Sill,” shows an early example of what would become her signature: a focus on the private lives of women.

Before departing for Paris, where she would eventually settle, Cassatt left two paintings behind with Manuel Barrera, a local who served as her artistic guide during her time in the city. The canvases descended through his family, only to be discovered in recent years by scholar M. Elizabeth Boone, who was invited to see them in a private collection in the suburbs of Madrid.

Today, Cassatt’s Spanish Girl makes her American debut in Norfolk, providing a peek at the early career of an ambitious woman from Philadelphia who would become known as one of the greatest of the Impressionists.

See TFP’s monthly calendars for events related to the exhibit.

Amber Kennedy is a Senior Public Relations Counselor with The Meridian Group, which handles public relations for The Chrysler Museum of Art.