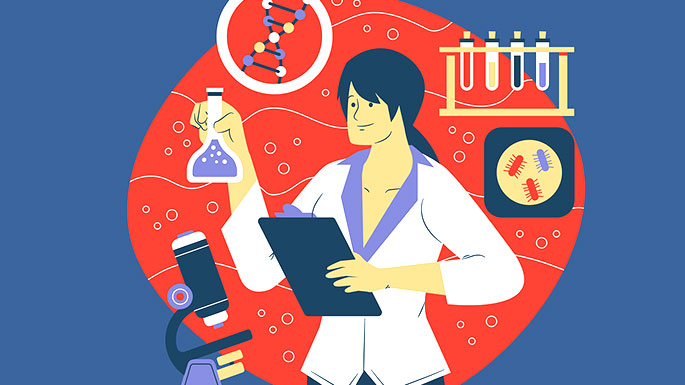 by Marcy Germanotta
Published in Enrichment
Rate this item
(1 Vote)

Hannah, 9, and Julianne, 12, live in Virginia Beach and love playing hopscotch, combing each other’s hair, and playing with dolls. But the sisters also like building robots, playing with science kits, and making slime. Who wouldn’t?

Kids are natural engineers. They are incredibly curious, love to play, take things apart, and interact with the world to understand how it works. Girls in elementary school already have the right mindset for STEM: they’re open minded, aren’t afraid to ask questions, enjoy working with others, like to use their imaginations, and love making things.

Hannah and Julianne get a lot of opportunities to let their imagination soar and explore the world. Along the way, they are learning about science, technology, engineering and math (STEM), an important part of any child’s education, but especially for girls.

Their mom, Southern Van Auken, says the girls have always enjoyed science and math. She’s seen that interest grow as they have become involved in Girl Scouts, an organization that has a focus on STEM programming.

“Julianne especially enjoyed earning the Auto Engineering badges at A Place for Girls,” she said. “For her, it was a day of fun, building and racing battery-operated cars with her friends. As a parent, I was impressed with the difficulty of the activities. Girl Scouts knows how to challenge girls at just the right level for their age and ability. Not only did my daughter earn a STEM badge that day, she gained a huge boost of confidence in her own abilities. She came home and built two more cars on her own, just for fun.”

Southern, who has been home schooling her daughters for several years, thinks science and math activities are more than educational—they empower girls and give them confidence to tackle problems in life.

“Hannah is excited to earn the Cybersecurity and Math in Nature badges this year. Both of my daughters want to work on the Girl Scout Climate Challenge,” Southern said. “And we’re looking forward to completing the Space Science activities together as a family. Having fun while learning makes the learning stick, and they gain confidence when they succeed. They also learn important lessons, such as persistence pays off.”

This summer, the Van Aukens met another home school family at the Norfolk Botanical Garden. They explored the biodiversity at the garden, learned how trees and climate are connected, and got a better understanding about the impact of climate change on bees and other pollinators such as butterflies. The tour through the Butterfly House was one of their favorite stops.

“Today, our children hear about climate change and environmental issues on a daily basis,” Southern said. “It can be overwhelming but important to include in STEM studies. Our trip to the garden was educational and empowering for them. My girls learned how each person can make a difference. Their walk through the Butterfly House inspired them to come home and plant milkweed and fennel to help the monarch butterflies.”

It doesn’t take much to spring into a full-fledged project when it comes to a kid’s interests. Something as simple as observing rust on the swings at the local playground turns into exploring how rust forms and doing sample experiments to find out what things will rust in water—and what will not. Science is everywhere!

“The freedom to fail and try again allows girls to flex their problem-solving and leadership skills,” said Jacqueline Brooks, who manages STEM programs for the Girl Scouts of the Colonial Coast. “I love seeing the girls use their imagination and create. The design-thinking process makes challenges exciting—and makes the element of failure part of the process and normal. This can be a lesson that crosses over from science into other areas of their lives, since girls have concerns about success and failure in general.”

Exposing girls to STEM through activities at home, in the community, or with organizations dedicated to STEM education can make an impact on keeping girls interested in STEM. We know that in elementary and early middle school, girls perform just as well as boys in STEM fields, but research shows that girls’ interest fades as they move through middle and high school.

While girls are taking a similar number of science courses as boys, they tend to prefer biological science courses compared to boys who gravitate more towards physics courses. Boys outnumber girls almost 3 to 1 in engineering courses and more than 3 to 1 in AP computer science. So why the disparities? One reason is not having female role models.

“We know if she can see it, she can be it,” said Girl Scouts of the Colonial Coast CEO Tracy Keller, who was the only woman to graduate with a degree in computer science and math in 2005 from Virginia Wesleyan College. “I was lucky. As a Girl Scout, I was exposed to women role models in math and science careers. That was nearly 30 years ago when I was a teen.”

In addition to the lack of role models, stereotyping can also have an impact. STEM fields are often viewed as masculine, and teachers and parents often underestimate girls’ math abilities starting as early as preschool. At home, seemingly innocent communication and non-verbal messaging can influence the way girls view STEM. Replacing talk such as “science is really hard” or “I was never good at math” with “I know it’s a tough problem, but we can figure it out together” can be a game-changer.

Parents can also model confidence towards STEM and the ability to persevere in the face of failure. Seeing you tackle new tasks with optimism and lots of preparation sets a good example. Research shows that it’s by experiencing mastery and rebounding from failure that girls develop healthy self-confidence.

“As a parent, I want to inspire my girls and expose them to unique opportunities that will help them lead and create positive change,” Southern said. “As our world and workforce continues to become more technology-driven, it’s more important now than ever to harness the potential of girls through STEM.”