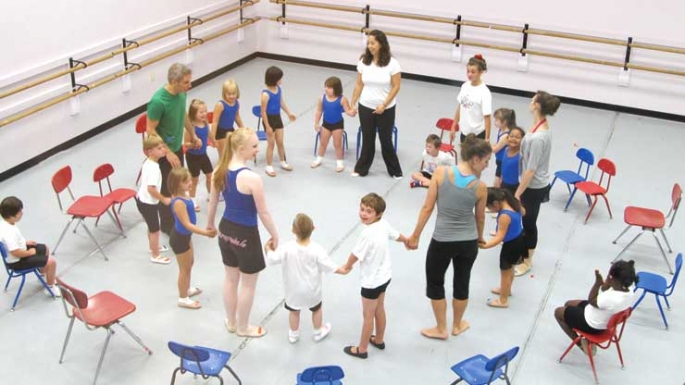 by Selina Edwards
Published in Arts
Rate this item
(0 votes)

At first glance, this looks like an ordinary dance lesson. Todd Rosenlieb, director of the TRDance Center and chair of the dance department for the Governor’s School for the Arts, is teaching classical ballet techniques like pliés, sauté, chassé, and first position to children in leotards. He commands attention, he praises, and he celebrates his students’ attempts to master the moves.

However, in this class, a student’s accomplishments might also include being able to tell one’s right foot from one’s left. Or, saying a three-word sentence—“Dancing with Todd.”—for the first time ever.

For this is no ordinary dance company: it’s Adaptive Dance, a class Todd teaches, along with help from others, to an extraordinary group of students: children with Down Syndrome.

The class is a partnership between TRDance, CHKD, and the Down Syndrome Association of Hampton Roads and helps fill a void for children with DS, who sometimes have difficulty with sports-related activities. Many of the kids return year after year, and Todd has been able to build on their skills. Plus, it’s fun.

“It’s amazing what they can pick up,” said Virginia Beach resident David Floyd, father of 11-year-old dancer Lauren and vice president of the Down Syndrome Association of Hampton Roads. “It just blows my mind.”

Let’s meet a few of the folks who help make this magic happen.

The Adaptive Dance Class meets for two 10-week sessions each year and performs in a variety of venues. The kids have danced onstage at the TCC Roper Performing Arts Center, performed at the Step Up for Down Syndrome event, and entertained family and friends in the Benjack Studio Theatre at TRDance.

Working with this special group of students requires creativity and imagination. For example, when they performed at the Roper in a piece called Carnival of the Animals, Todd taped huge pictures of each child’s face to the floor so they could find their marks on stage.

“It is a miracle of the dance gods because they listen to me,” said Todd, laughing.

David praises Todd’s efforts and says the dance class is a natural fit for kids with DS. “I think a lot of our kids in general love music and dance anyway, so Lauren has just taken to it wholeheartedly,” he said.

Lauren has taken several sessions of the Adaptive Dance Class, and, according to her dad, she constantly practices ballet positions, propping her leg up on barstools, trying to perfect first position.

“She’s Miss Ballerina now all the way,” David said with a chuckle.

The class is inspired by a similar program offered by the Boston Ballet, where they teach an Adaptive Dance Class to children with DS and autism spectrum disorders. Chesapeake resident Melissa Zaletski, whose grandson Gus has DS, discovered the program in an article in People magazine in 2009.

“It just spoke to me and I thought, ‘Well, I wonder if we could have a program similar, comparable, modeled after, here in the Hampton Roads community?’” Melissa said.

Armed with some information from the Boston Ballet, she set about finding a venue where children with DS could learn the fundamentals of dance.  Both remember Todd’s initial reaction in exactly the same way. He saw what Melissa was trying to do and simply said, “How could we say no?”

From the beginning, Todd could tell the class resonated with the students. “The power of dance was proven in a split second,” said Todd, “It was about having a good time,” he explained, “and it was about moving from your soul—and they wear their hearts and souls on their sleeves.”

However, it’s Todd and volunteer dancers from the Governor’s School who say they feel blessed.

“The kids who do it—their lives are changed,” he said of the volunteers who helped during the Saturday morning class. “It gave them something to really care about, maybe for the first time.”

Lauren can often be found sitting in the lap of one of the volunteer dancers during downtime in class, according to David.

“They actually form a bond,” he said.  “I think it’s beneficial for both parties.”

A LABOR OF LOVE

The class is a labor of love for Todd. All of his experience as a dancer, choreographer, and teacher comes into play as he creates the myriad elements of the program. It’s not just teaching fundamentals, it’s teaching them in a way that makes sense to the kids and is fun. In the beginning, there was a lot of trial and error.

“It was the longest first hour class of my entire life,” Todd remembered of the initial Adaptive Dance Class. “After 25 minutes, I had run out of tricks.”

So, he began with the basics. They started out in chairs, and when dancers had trouble distinguishing their right and left feet, Todd taped red on the students’ right feet and blue on their left. All dancers and instructors wore the red and blue tape, allowing the dancers to connect that visual with movement.

“I devised things that were important elements of dance, like rhythm,” said Todd. “So we played the rhythm game.”

Tapping to the beat of a live drummer, dancing with scarves, and dancing with each other while Todd chants little made-up poems make the class fun.  But, Todd is adamant that they learn essential elements of dance, and last year (along with a helper for each child), he took his dancers to the ballet barre.

“They’re finding this independence, this knowledge that they can do things,” said Todd.

“They really take a lot of pride in what they learn and what they’re able to do,” agreed Melissa.

Melissa and the other parents definitely notice that the class is run within a specific framework. Todd demands that his students learn proper dance routines and terms.

“Dance class is like a religious ceremony or a rite of passage,” Todd pointed out. “It’s a tradition. You do the same things every time, and I think there’s security in that for the kids.”

The students also take their classes in the same space where Todd’s professional dance company trains.

“Just to be in that venue—,” Melissa said, “you go in there and you’re in a new world.”

However, Todd’s main emphasis is on having fun. He makes up silly rhymes and wiggles with the best of them. “There is no wrong way,” he pointed out. “There’s no failing in modern dance.”

Physical activities are especially important for kids with DS, and their bodies present a unique set of challenges. While they are often highly flexible, their joints are unstable, and low muscle tone makes it difficult to build strength. That’s where CHKD comes in, with volunteer physical therapists that have knowledge of working with kids with DS.

“I did not have any dance background whatsoever coming into this,” said Nichole Williams, DPT, who works on an outpatient basis with kids at CHKD. She volunteers periodically throughout the season with the Adaptive Dance Class. As a physical therapist, she helps make sure the dancers are not injuring themselves, gently correcting locked joints, and modifying certain moves for different dancers. The benefit of the class is clear to her.

“He incorporates a lot of what we call bilateral coordination into the dance program,” she said of Todd’s repertoire. “As a physical therapist, I was pretty surprised at his grasp of how the body moves.”

Parents of kids with DS are often leery of sports because of the increased possibility of injuries. This allows them a way to incorporate physicality in a safe, supportive environment.

“Now, I’m introducing this to some of my outpatient patients,” said Nichole. “This has opened my eyes to the resources out there.”

Besides the physical benefits the kids get from the class, the sense of camaraderie among the students is clear, according to Nichole.

“When Todd would come in, they would run to him,” she said.

Todd appreciates how his adaptive dancers are special, but they’re typical kids, too.

“In the eyes of some people, dance is a frivolous venture. It’s ephemeral. It disappears the minute it’s done,” he said. “But, that same principle gives such a solid foundation and sense of being for not only the kids, but also the parents, in a very normal way.”

Selina Foreman is a stay-at-home mother of two and freelance writer.