Whether you’re a diehard recycler who shops with canva... Read more

How To Have a Happy Pet

Owning a pet is a privilege and should result in a beneficia... Read more 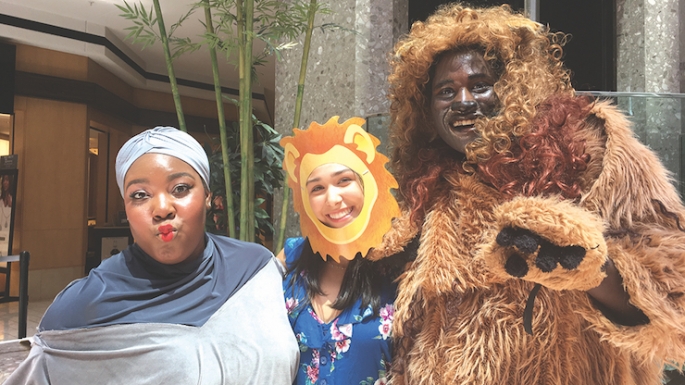 A View from Onstage

by Isabella Orosco
Published in Enrichment
Rate this item
(0 votes)

Being part of a theatre troupe teaches your kids time management and more.

Editor’s note: Isabella Orosco is a high school senior and plans to pursue musical theater. She was recently the student director for the Hurrah Players’ August production of Madagascar. Her favorite role was Elsa from Frozen Jr. performed at The Sandler Center last March. Here’s what being involved in the theatre has meant to Isabella.

At eight years old, my life was forever altered when my mom took me to see a musical called “Wicked” at the Chrysler Hall in Norfolk, Virginia. I don’t know what I was expecting, but I do know that I had no understanding of how much it would impact me emotionally.

At the end, I looked over at my mother, whose teary eyes mirrored my own, and said, “I want to do that someday.” Now, at the age of 17, I have performed in 20 shows, been invited to sing in countless venues in the Hampton Roads area, been interviewed on television for “The Hampton Roads Show” and “Coast Live,” and directed my first show for the Hurrah Players in August.

To say that I chose the arts would be an understatement, and in a very real way, it chose me. The performing arts have given me a window into lives and cultures and experiences that I would have never known about otherwise.

I know there have been a lot of studies over the years explaining the benefits of an arts education on the academic successes of children, but let me explain what I gained from having the privilege of working in the field for the last eight years.

One of the first things I learned when put on a stage was awareness and how to “think outside of the box.” In live theater, you figure out quickly that something will go wrong in Every. Single. Show.

You have to work around the issues and sometimes you only have seconds to figure out how to cover a mishap, like broken beads spreading along the floor before a big dance number, a wig that falls off requiring an ad-libbed line, or a prop that’s about to fall. You have to think fast and rely on your castmates, which leads me to the second thing I learned in theater. You must completely trust and respect your stage peers.

In a world that has become increasingly less interested in social contact, performers are masters in the craft of human observation. In order to portray emotion, you have to research and understand the characters you are bringing to life. Along the way you will learn more about people and develop an empathy that translates through both your performance and the responses you give to the people you work with outside of the arts.

The byproduct of working in close-knit environments is that it teaches us another valuable life skill: how to work with many different personalities to achieve a desired result.

Theater is not only a team effort, it’s a familial bond. I didn’t know that I would work with and, more importantly, become friends with set crew designers, costumers, live orchestra musicians, stage managers, music directors, and artistic directors, just to name a few.

It is a world within the world when you prepare for a show and you become a family in every sense of the word. You learn to appreciate what others bring to the table and to respect the timelines that are required to accomplish the task.

Time management and preparation are essential to being successful, especially as a young performer with the demands of school and other extra-curriculars. You have to make responsible and sometimes hard decisions about how to prioritize daily schedules.

But the most important lesson I have taken from my experiences is humility. You will make mistakes and you will make them often. Performers are always striving to be better than our last performance, or our last class, because that is what we can control. Perfection doesn’t exist, and striving for it will just prove frivolous.

For more information about The Hurrah Players or to buy tickets for their upcoming performance of The Little Mermaid, please visit www.hurrahplayers.com