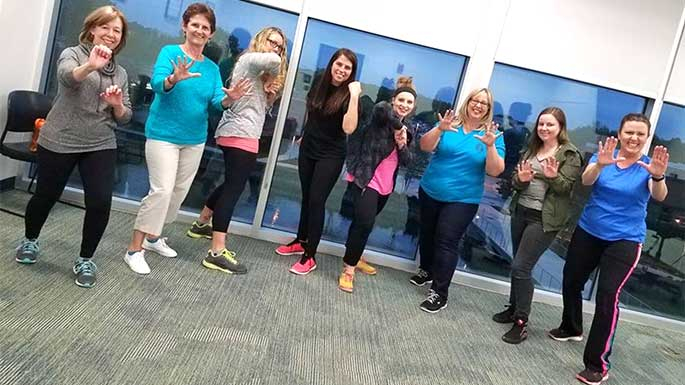 by Melissa Face
Published in Safety
Rate this item
(0 votes)

What you need to know to be safe.

My two young children and I were out walking when we noticed an unfamiliar car drive slowly past homes in our neighborhood. The first time the car passed us, I took a photo of it. It had Florida plates and a makeshift sign on the side for an electric company I had never heard of. I thought those details were suspicious, so when it passed us a second time, I called the police.

While we were waiting for an officer to arrive, my children and I continued walking back and forth on a side street. I didn’t want the driver of the car to know which house was ours, and I wasn’t about to get trapped on a dead-end road.

The officer arrived, stopped the driver, and determined that everything was legit. The stranger was with a company subcontracted by Dominion Energy. I thanked the officer, and she left.

Did I overreact in this situation? Let’s check in with some local self-defense experts who say that when it comes to personal safety, it’s always better to protect yourself first and apologize later.

Using Your Voice as a Form of Defense 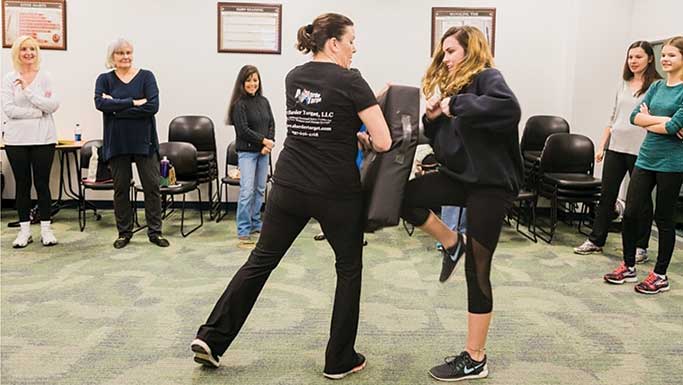 Leta Krieger, a former Virginia Beach police officer and founder of A Harder Target, LLC, offers personal safety training and self-defense courses for women, teens, girls, and groups. A lengthy career in crime prevention led to the development of her program. Because she is well aware that predators look for an easy target, Leta begins her training sessions by helping her students develop a voice.

“Many of them come in very quiet and reserved, and I make them yell,” Leta said. And not only does she make her students yell, but she makes them yell “FIRE!”  and “GET BACK!”

“I was skeptical about this earlier in my career. I thought it was a silly idea until I researched it further and saw it in practice. But it works,” she said. “It catches perpetrators off guard; they aren’t expecting that. It also creates a scene and attracts the attention of onlookers.”

When Leta’s students start using their voices in class, she sees their confidence levels improve immediately. That is something that criminals pick up on, and it often causes them to move on.

Criminals are looking for specific characteristics in potential victims, and contrary to previous beliefs, it has little to do with what a woman is wearing or how attractive she is. In the late 1980s, two social researchers placed cameras around New York City to film passersby. Then, they showed that footage to incarcerated individuals and asked them who they would target. There was an overwhelming consensus; they all chose the same women. The women they avoided, however, appeared confident, made eye contact with others, were aware of their surroundings, and walked with a steady gait.

While improved confidence and self-awareness are important initial steps, Leta wants women to know that consistent, repetitive training is also essential. “If you have rehearsed your actions and know how you will respond, you are less likely to freeze up in a critical situation,” she explained.

Leta tells women never to be complacent and to get out of the “nothing will happen to me” mindset. Take precautions such as always locking car doors, parking in well-lit areas, and asking store personnel to escort you to your car if you are feeling vulnerable. If a confrontation occurs, use verbal commands and a loud voice to keep a potential attacker at a distance and escape the situation. It is not your job, however, to calm the attacker down.

“We are all vulnerable, especially women,” Leta said. “That’s why it’s important to trust your instincts. If the hair on your arms raises up or you get a chill, that’s your inner voice telling you that you’re in danger. Trust those signals and take action.”

Hand-to-Hand Combat in a Confrontation 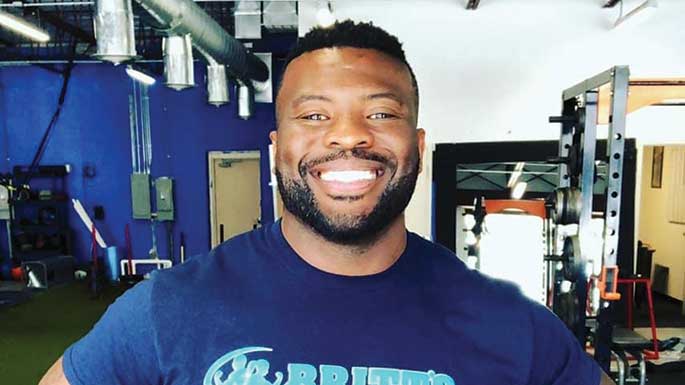 Antwain Britt, owner of Britt’s Personal Training and Self-Defense in Virginia Beach, has been teaching self-defense courses for eleven years. Antwain frequently discusses situational awareness in his classes because that is a woman’s first line of defense.

“It eats me alive when I see women leave a store with their phone in one hand, keys in the other, and zero awareness,” he said. “That’s a perfect target. Nine times out of ten, you aren’t going to be able to identify the perpetrator. So, when you’re completing a task, just complete the task. The calls and texts can wait until you are in a safe location.”

Antwain agrees that assailants are not looking for a fight. They are hoping to find an easy victim, someone who isn’t physically opposing and doesn’t seem to be paying attention. So how can a woman avoid being an easy target? “Look confident and dominant,” Antwain said. “Don’t have your head down when walking to your car or be distracted by digging through your purse.”

When physical contact cannot be avoided, however, this is where specific training comes in. Antwain, who started off as a mixed martial artist, decided to use his knowledge base to help people protect themselves. He began with teaching the basics of personal protection in one-off workshops, then progressed to more continuous training.

Antwain says it really doesn’t matter what style of training you choose. “It’s important to find a training style that you like,” he said. “If you enjoy doing it, you have a better chance of becoming proficient. Then it’s more likely you would be able to pull it off if you ever needed to.”

There really is no “typical” student in Antwain’s classes. There are middle-aged women and younger girls. “I often instruct younger girls who are going off to college because their parents want them to learn self-defense,” he said. “I teach them hand-to-hand combat, as well as how to react and counteract in a confrontation.”

For example, if someone invades your personal space, Antwain advises putting your hands up to cover your face and keeping your palms open. “This reinforces your desire to avoid a physical altercation. It’s not a fight; it’s self-defense,” he said. “It’s not a combative scenario but an attempt to neutralize the situation and remove yourself from it.”

Antwain tells his students that they are the rulers of their own personal space. “If you feel like someone might cause you harm, it’s your right to react in the way that you see fit.” 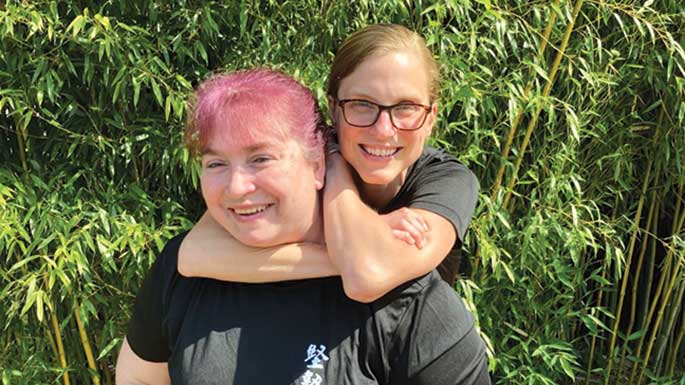 Jenn Taylor and Aubrey Odom, instructors at Norfolk Karate Academy, are both black belts in Korean karate and blue belts in Gracie Jiu-Jitsu, a style of Brazilian Jiu-Jitsu created by the Gracie family from Rio de Janeiro.

Both women also hold pink belts in the Women Empowered Program. “Women Empowered is the official Gracie Jiu-Jitsu self-defense program for women,” explained Aubrey. “It began in Torrance, California at the Gracie University headquarters and is now taught worldwide.” Norfolk Karate Academy was the first certified training center for Women Empowered outside of Torrance.

The program teaches women how to neutralize the most common attacks from a hair-grab and a choke-hold, to a pin by an armed assailant. These class sessions are very open, and participants can ask questions about various topics, as well as discuss individual boundaries and practice de-escalation techniques. “These techniques focus on using calm tones and non-threatening body language, as well as mental strategies to keep yourself steady and collected,” said Aubrey.

In early sessions, participants are reminded never to become so comfortable in their environments that they tune out things around them and become more vulnerable. “Our phones have become the enemy,” said Jenn. “We are constantly looking at them, and our heads are down, so we aren’t even aware of what is happening.”

After discussing ways to avoid an attack, the instructors work with students on specific techniques such as how to get out of a wrist grab or what to do if someone sits on your stomach or attempts to pick you up.

“I love this work,” Jenn said. “Not too long ago, one of our students joined us at the age of 63. She was very timid at first but got more and more into it. One day she saw some younger men doing Jiu-Jitsu moves and told them they were doing them wrong and showed them the correct way! Seeing the transformation in these ladies is so worth it.”

Women can be especially vulnerable to domestic and other violent attacks. Because women are often stereotyped as being overly dramatic, many call for help too late. “When I was in the police force, I heard women say that they didn’t call us because they didn’t want to bother us,” Leta said.

Experts agree that when it comes to personal safety, there is no need to worry about overreacting or apologizing. While there are many methods and styles of training, the goal of all self-defense trainers is the same: to make sure women avoid or safely escape dangerous situations. Protect your space first and apologize later—if at all.