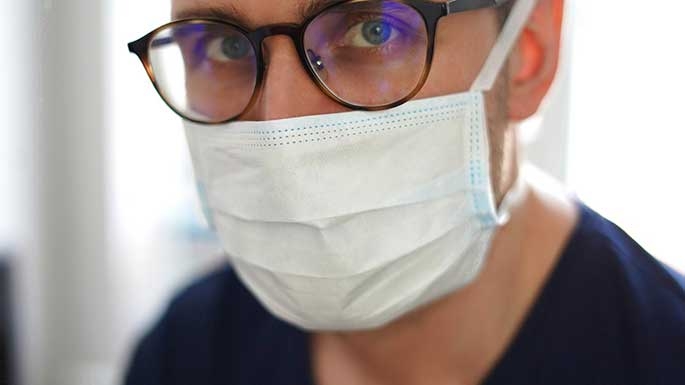 by Lindsay Gibson
Published in Health
Rate this item
(2 votes)

It started with the couple in the middle of the street. I was out for a walk and saw them coming toward me; the woman chatting and pushing a stroller, the man reining in their foraging dog. I could see they were preoccupied, but I was annoyed they didn’t give me my six feet of Covid distance. I’m sure I gave them a look as I tromped into an adjacent yard to get some space.

A few encounters like this began to take the shine off my walks. I started noticing how often people did not move over, how many times I nearly stepped into flowerbeds to give them a wide berth. What was wrong with everybody? Didn’t they read the news? Couldn’t they imagine how contagious we all could be?

I certainly could because I have a really good ability to picture invisible things. As a child, I could imagine bogeymen and ghosts. When I was a teenager, I imagined social eviction if I wasn’t cool enough. Later as an adult, I imagined dangers that could impact a loved one or the real possibility of failure when trying something new. I hoped for the best, but I was basically still that person who could imagine monsters under beds.

In the age of COVID-19, my galloping imagination has certainly been spurred along by the evening news, morning paper, and reports of illness nearby. Clearly, I have the kind of mind that treats what could happen as something about to happen. I don’t have to actually suffer the results of my actions in order to imagine what it would feel like to live those consequences. Anticipatory, imaginative types like me avoid a lot of trouble this way, but it can make us resent innocent passers-by on our neighborhood streets. I expected that, given a major threat like COVID, others would imagine the world the same way I imagined it. But now

I’m realizing that many people don’t have my kind of imagination—I just hadn’t notice it before. We had never found ourselves in a situation where we were faced with this fundamental difference in our imaginations.

Before COVID, if I liked to avoid danger and someone else never worried about it, we may not have found that out about each other. We might have peacefully coexisted with our very different imaginations never crossing paths. But now, I discover that what my imagination directs me do might seem extreme to another and vice versa.

I have to remind myself that if everyone had an imagination like mine, exploration would have proceeded at such a glacial pace that we would be lacking much of modern life that we now take for granted. No one would have sailed the seas, crossed the country in a covered wagon, or signed up to be an immigrant.

Sometimes, it seems, it is to our advantage when people don’t imagine the worst. Human beings get a lot done and unexpectedly desirable things often result when people imagine that they are safer than they really might be. Although I see such people as volunteering to be lab rats in a high-stakes experiment, they see themselves as enjoying life. I see risks where they see freedom. But it feels good once when I realize that we are each other’s Yin and Yang of world views. What a dreary place it would be if we all lived in fear of the what-ifs.

Yet, who knows what cliff we might run off if the others were always in charge? We are like partners in a three-legged race: getting along not very comfortably and certainly not gracefully, but moving forward nonetheless.

I have stopped my mental warfare. Now when I go for a walk, I just wear a mask. I have accepted the fact that other people don’t imagine danger the same way I do. When no one’s around, my mask is down, but when others don’t distance, I pull it up. The other person imagines things are okay, and I’m imagining they aren’t. This works better than fuming over whose imagination is best. In the long, long run of human history, that might be hard to tell.