Surf’s Up for Local Families

Meet three local families who find togetherness in the ocean.

Family togetherness occurs when happiness binds parents and kids together. It can happen when you’re hiking a tree-lined trail together, playing a round of putt-putt, or eating s’mores beside a campfire.

For many Coastal Virginia families, the ocean brings them together. Let’s meet three surfing families who have grown up in, on, and around the Atlantic and love the sensational surf it creates. Surfing is a sport these families enjoy together, an escape from the stresses of life in the 21st century. As Lliam Maloney, age 11, said, “Surfing brings peace to my life.” 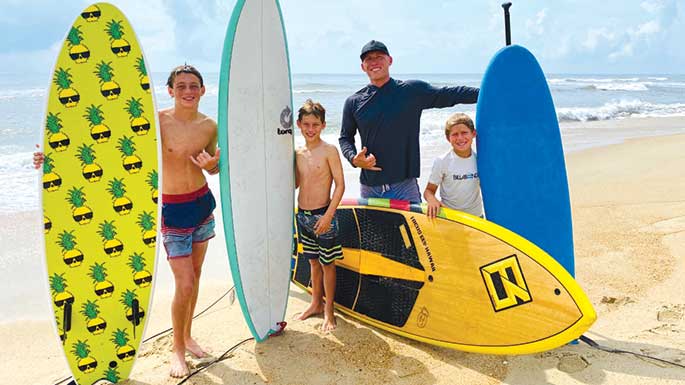 Michael Davis has surfed most of his 38-year life, so it seemed natural to put his three kids—Ethan, 10; Grayson, 8; and Jaxon, 6—on surfboards as soon as they could swim. Teaching the kids how to handle a board was easy, thanks to a backyard pool where they could practice paddling and balance.

Now, the kids are like fish in water, surfing at Sandbridge or Avon, N.C., where they spend summers not just riding the waves but also fishing and all things beachy.

“Part of the joy of surfing is really just the relaxing experience it brings to our family,” said their mom, Courtney. “Although I’m the least talented surfer in the family, I enjoy paddling out with the boys and attempting to catch a wave.”

When you surf, there’s plenty of equipment to get you where you want to be. For the Davis clan, it’s spring and fall wet suits to accommodate seasonal water temperatures, as well as classic fiberglass and foam boards.

“Foam boards are perfect for beginners because they are easier to catch a wave and don’t hurt to fall on,” said Courtney.

Lots of practice and surf camps have helped the boys mature in their surfing skills, according to Mom and Dad. Ethan says it’s all about knowing your board and having control. Grayson says he tries to “read the waves,” while Jaxon prefers to “paddle hard, move quick, and be patient.”

For Ethan and Grayson, the perfect wave is usually a four-footer. Jaxon, on the other hand, said it’s “the biggest wave you see.”

Each boy has had his own scariest and best moments, and all three have learned to take everything in stride. For Ethan, the most memorable moment was riding a 5-footer down the line during a storm surge. His worst time was falling on a big wave and his board hitting him. “I had a hard time coming up for air because the waves kept crashing,” he said. “I learned to take my time and don’t rush to get out.”

When the boys aren’t at the beach, they watch surfing on kid-friendly YouTube channels and play baseball.

“It means so much to me to see the boys and their dad bond over surfing,” said Courtney. “We are willing to skip baseball games and get up early and stay all day at the beach.” 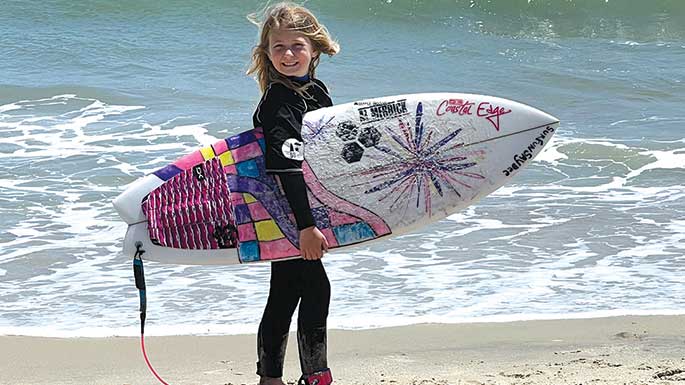 Born and raised in Virginia Beach, long-time surfers Richard and Kate Stiles introduced their three kids to surfing so they could “respect the nature of the ocean and our Earth,” Kate said.

“We started catching waves with them while they would lie on their bellies when they were about a year old,” she continued. “By around three, both Saydee, now 9, and Reese, 5, started standing on their own. I’m curious to see if Shelby, 3, attempts to stand up this summer.”

For the Stiles family, surfing keeps them active, smiling, and living in the present. “Household cleaning, laundry, and yard work gets put off because we would rather surf,” Kate admitted.

In addition to recreational surfing, all five are members of the Eastern Surfing Association, Virginia District, and compete in contests held at First Street at the Oceanfront and the Little Island fishing pier in Sandbridge. Saydee and Reese also compete up and down the East Coast and have won numerous trophies and medals.

“They both started competing at the age of four,” Kate said. “Competition is generally based on who scores and catches the best waves and who rides the longest lines. Skill performance and style also influence how the judges give scores.”

The family’s equipment stash includes 30 surfboards of various sizes and shapes and materials. Their favorite place to surf is the First Street jetty because it’s just a 10-minute drive from their home in Ocean Lakes. They surf year-round and sometimes multiple times a day, according to Kate.

“Saydee and I love to go super early in the morning in the summertime and catch waves while we watch the sunrise,” she said.

While surfing ranks highest among the family’s outdoor activities, they also camp, hike, snowboard, ski, play baseball, compete in gymnastics, and are involved in Girl Scouts.

“Surfing is so much fun,” Saydee said.  “It’s also cool to see animals, such as dolphins, different birds, jumping fish, and crabs out there.” 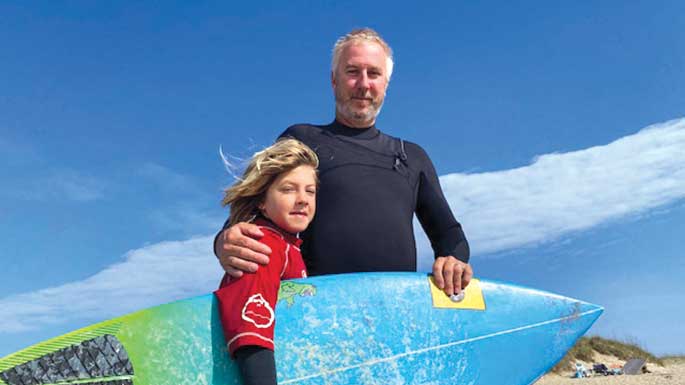 Lliam and Carson Maloney will tell you without hesitation they would rather surf than do schoolwork and chores. So would their parents, Mike, 46, and Christine, 39. In fact, their vacations and outings are planned around waves.

“The ocean can keep us all busy doing something we love, and surfing new waves brings a lot of excitement to the boys,” Christine said.

Christine, who started surfing for fun in 1995, is a fair-weather surfer—no cold water for her. Mike got into surfing in 1980 and turned competitive in 1988. Lliam has gone to Florida to compete in the East Coast Grom Tour and has taken a couple firsts in other contests. Carson, too, has placed in finals.

“Lliam is probably the bravest of us all currently. He will surf in any weather conditions in full gear, and it doesn’t bother him at all,” Christine said. “Carson prefers not wearing a hood which limits him to April-December roughly.”

Other than Sandbridge, the Maloneys like to surf in Frisco, N.C., where they can drive their truck on the beach. Nearby Buxton is a favorite spot, too, because the beach’s jetty means there is always something to ride.

Since Lliam and Carson began tandem surfing with their dad when they were each two to three years old, the boys have learned that balance and strength are their friends.

“Wiping out in a huge wave was my scariest moment,” Lliam said. “I’ve been taught to not panic when or if I get held under.”

Any dedicated surfer will tell you scary moments in the water are put aside because you focus on the best moments—like those perfect waves that send chills down your spine.

“The perfect wave is different for all of us,” Christine said.  “For me, it’s thigh high and glassy. For the boys, it’s a head-high, glassy, barreling wave with no one else out.”

“Mental bliss is what you feel when you surf,” said Mike. “It’s such a great healthy sport, one you can do your whole life.”

“You feel free in the ocean,” Lliam added.