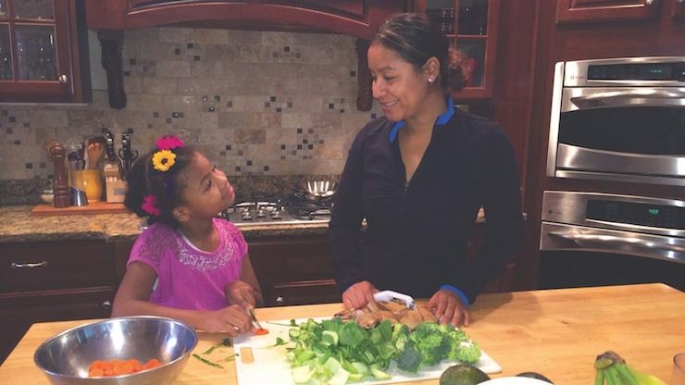 Holiday vacation time is approaching, and I already feel like I need a vacation from the vacation planning. Being on a plane with my kids is an anxiety-ridden event and not for the reason you would expect. You see my eldest loves dinosaurs, can’t get enough of being in the water, and is also afflicted with a severe allergy to nuts.

I was sharing my woes with a friend who asked, “Well, you have an Epi-Pen, don’t you?” I cringed. Saying that to a parent with a child who has a severe allergy is like telling that parent to put her kid in a room with toxic fumes and then see what happens.

Like any new mom, I pored over the What To Expect books, experimented with homemade baby food, and tried to feed my daughter mostly organic produce. Though I was moderately aware of potential allergen triggers in some foods, I realized in hindsight that I was in no way prepared to spot the signs of a potentially fatal allergic reaction.

It was early spring and my little one was already showing some signs of seasonal allergies. She was fussy and not the least bit interested in her sweet pea puree. Trying to get her to eat something, I decided to have her try a bite of my peanut butter and jelly sandwich. Because she was just learning to speak, she simply uttered “tongue” and attempted to scrape the gooey mixture from her mouth. I chalked it up to the texture and then moved on to the sweet pea puree. She already had a cough and at first was showing little to no signs of distress. I briefly toyed with the idea of her being allergic to the peanut butter but assumed that if she were, surely I would see some obvious signs such as swelling of the face, hives etc.

We wrapped up dinner and began the bedtime routine. As I went about her bath, I noticed that her cough was becoming more persistent than it had been an hour before. My husband, a physician, wasn’t alarmed and pulled out the humidifier to help soothe her. We agreed we would keep an eye on her, but neither of us caught the slow storm that was brewing inside our toddler who was on her way to experiencing an anaphylactic response.

Shortly after her bath, she began to doze off. I was relieved, as she had grown increasingly fussy. But as she was falling asleep, she began to make an unusual snoring sound. Whether it was maternal instinct or the intervention of a higher power sounding the alarm, something told me that she was not OK. I just didn’t know how bad it was.

After calling her pediatric after-hours hotline, I reached the nurse on-call, who immediately alerted me to the severity of the situation. What I thought was snoring was actually her airways closing up. She instructed me to call 911 immediately—every mother’s worse nightmare!

An innocent treat of peanut butter and jelly spiraled into a terrifying trip to the emergency room. It was only then that a few hives flared up and her eyes swelled shut. As I watched helplessly while the doctors pumped my baby girl with epinephrine, I tussled with the fact that I had just fed her something that could end her life.

Thankfully, the medicine kicked in, her breathing became less labored, and the swelling subsided. Though my daughter was now out of the woods, our lives were about to change in more ways than one.

After getting her tested by an allergist, she was diagnosed with a severe allergy to peanuts, all tree nuts, and eggs. Keeping her safe means keeping nuts from her diet.

Sounds simple enough, right? But avoiding nuts also means having to avoid anything that may be processed in the same facility. As a nut-free family, we avoid a considerable amount of processed or packaged foods. Even just as concerning is that simple trace amounts of allergens can also cause a reaction. Dining out is limited to a few “safe” places that have good practices that allow people with allergies to select nut-free options and avoid cross contamination.

Since special occasions equal sweet treats, these typical social gatherings can also be tricky. Our family’s rule of thumb: When in doubt, do without! Though it does get hard sometimes, our daughter, now seven, has, grown to accept the challenges that come with severe food allergies.

According to a study released in 2013 by The Centers for Disease Control and Prevention, food allergies among children have increased 50 percent between 1997-2011. This potentially deadly disease accounts for more than 200,000 emergency room visits per year—ranging from a mild response (itchy mouth) to a potentially deadly reaction like anaphylaxis.

Though there are several theories regarding the increase in food allergies, no one knows for sure what causes it. Food allergies can be sneaky, which makes it even more difficult to handle. In some ways, it has become the monster under our bed—always lurking, waiting to rear its ugly head.

So the next time we meet at a birthday party or a friendly gathering, please be considerate to my constant probing about the ingredients in the baked treats. And know that I’m nuts about my kid, which is why I will fish out the discarded bag of chips from the garbage to make sure it is safe for her to eat. And please, don’t tell me that it’s OK as long as I have an Epi-Pen. Using an Epi-Pen is something we hope we will never have to use. If your child’s life depended on a simple ingredient, wouldn’t you be nuts about nuts, too?