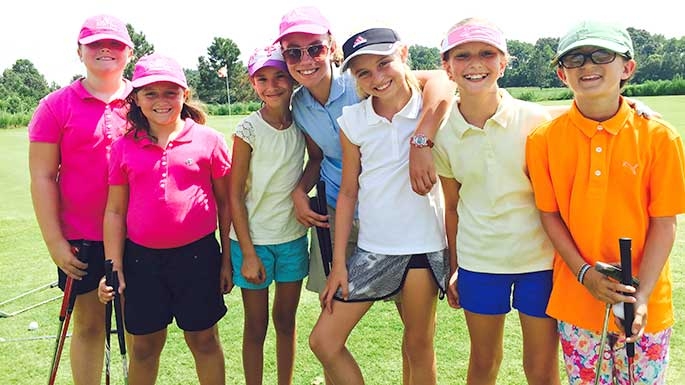 by Brandy Centolanza
Published in Fitness
Rate this item
(2 votes)

Living in a neighborhood with its own golf course has afforded Tony Rich the opportunity to introduce his son, Brody, to the sport at a young age. Tony, an avid golfer who lives in Williamsburg, started his child on the game a few years ago around the age of four. Tony, his wife, and Brody are often out on the course playing as a family in their Ford’s Colony neighborhood.

“I have golfed nearly all of my life and always envisioned having my son learn as well,” Tony said. “Having a golf course in our backyard made Brody’s interest almost come naturally.”

Brody received his first set of golf clubs for his fourth birthday, and soon after Tony was out with his son hitting balls at the driving range.

“The excitement of learning something new and the desire to hit the ball better and further each time helped his interest increase,” Tony said. “A few months later, we had him out on the course for the first time playing an actual round, and he was ecstatic.”

If you’re thinking about introducing your child to the game of golf, you’ll discover it offers many advantages. For one, golf is just as much a mental game as it is a physical one. As kids practice the perfect shot, they develop skills such as patience, concentration, and discipline, all of which carry over into other aspects of life, including school.

“The game also teaches kids something they can enjoy for their entire lives and allows them to socialize with various other golfers, helping to build their personality and social skills,” Tony noted.

One local program is The First Tee of Hampton Roads, offered by the YMCA of South Hampton Roads. It emphasizes developing life skills as well as teaching kids how to play. The First Tee offers classes and camps for kids ages 5 to 17, as well as outreach programs at local elementary schools and other locations throughout the community.

The First Tee’s mission is to teach life skills through the game of golf. Its nine core values include honesty, integrity, sportsmanship, respect, confidence, responsibility, courtesy, perseverance, and judgment. The program also stresses the importance of good physical, mental, and social health habits.

“We are always teaching these skills through the golf activities the kids play,” said Jessica Evans, executive director of The First Tee of the Virginia Peninsula, a program of the Peninsula Metropolitan YMCA.

“The kids are also learning communication skills by making eye contact with other golfers and shaking hands,” Jessica continued. “Respect and courtesy aren’t just for the golf course but for everywhere you go. We try to teach the kids to take ownership of that.”

The First Tee of Hampton Roads, which will celebrate its 20th anniversary in October, has a nine-hole golf course for families to practice and improve their game at its main location on Tournament Drive in the Princess Anne area of Virginia Beach. The First Tee of the Virginia Peninsula, meanwhile, holds golf lessons on courses in Hampton, Newport News, Yorktown, and Williamsburg.

Golf Gets Kids Off the Couch and Into Nature

In an age where technology has taken over nearly every aspect of a child’s life, golfing can be a nice respite for kids.

“The most obvious benefit of golf is being outside, exercising and breathing fresh air, rather than being passive, watching a screen,” said Paul Feakins, the former golf coach at Norfolk Academy.

“Golf requires an ability to focus that certainly helps in any endeavor and particularly in school work,” Paul added. “Golf also requires mental and emotional toughness because disappointments in golf abound. One has to be able to bounce back from mistakes and continue to play well. Additionally, golf is just fun.”

That should be the goal for parents when introducing the sport to their kids: keep it simple and fun. In the beginning, don’t be too concerned about the results or teaching the finer points, Paul advises. Make sure kids have the proper equipment, keeping in mind that they won’t need a full adult set of clubs when starting out.

Both boys and girls can pick up the sport at any age, though focus and patience should be factored into the equation before learning to play. Paul suggests kids are typically ready for the game between the ages of eight and ten, depending on their maturity level.

“Patience must reign in all aspects of teaching golf,” said Paul. “The first lesson needs to be about the proper grip, which will feel strange to the player. The second lesson is learning that golf is about swinging the club, not hitting the ball.”

“The club will hit the ball if you swing the club rather than trying to hit the ball, which is much harder,” Paul continued. “The third lesson is that the golf swing is based on a shoulder turn, not using your arm muscles. If you can work on those three key concepts, you will be well on your way to developing a game.”

Getting Girls Involved with Golf

While golf in its earliest days was primarily a men’s sport, women golfers have grown in huge numbers in recent decades. Today women account for 24 percent of golfers in the U.S.

It all starts with getting girls into the sport. The First Tee offers a program specifically geared toward females called the LPGA USGA Girl’s Golf Program. And girls are signing up in record numbers. Half of enrollees in The First Tee’s classes and camps are girls. In addition, the National Golf Foundation reports that 33 percent of golfers ages 6-17 are females, up from 17 percent in 1995.

Studies show that girls who are involved with organized sports like golf are more disciplined, function better as team players in the workplace, and develop stronger leadership skills. Plus there are lots of opportunities for females wanting to attend higher education to earn college scholarships for golf.

Amber Mackiewicz, 14, who lives in Virginia Beach, experimented with a few different sports before taking a liking to golf following a camp through The First Tee of Hampton Roads when she was five years old. She began competing in golf tournaments at the age of ten. Amber hopes one day to play college golf.

“Ever since she’s swung her first club, she’s loved it,” said her father, Christopher. “The First Tee is amazing. The biggest thing that Amber learned is how to fail and pick yourself back up. Golf is not a consistent game. You have your ups and downs, but it teaches you how to practice and put the work in.”

Megan Davis, 16, started with The First Tee of the Virginia Peninsula last spring. She typically plays golf twice a week with her father in the warmer months.

“I’ve always wanted something to do with my dad, and golf was the thing that we both enjoyed,” Megan said. “I like the feeling of making a really good shot down the course and knowing I can just improve from there.”

“Golf is definitely just as much a mental game as it is a physical game,” she continued. “There are health benefits, like all the walking, and it is good cardio, but you also have to know how to angle your body and the club, so you don’t hit it into the woods. When you’re putting, you need to know how hard to hit it as well as the slope of the green. There are many things that you have to think about when playing golf.”

One of the biggest benefits in golf for kids is that it encourages bonding time with their families. “Golf is a game that the entire family can enjoy for years to come,” said Tony. “What better way to spend the day with your family than being outdoors, physically and mentally exercising, all while enjoying the time together.”