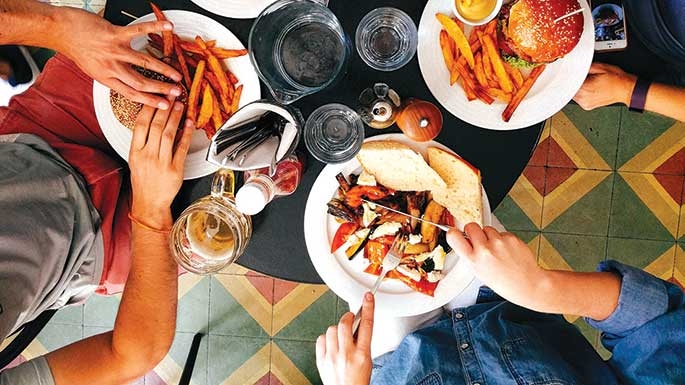 It Takes a Village

by Kathryn Streeter
Published in Health
Rate this item
(0 votes)

The sun descended into the ocean, a fiery orange ball igniting disco-like flashes across the rolling waves.

Sunburned, the kids were weary, nerves beginning to fray. Parents faced the aftermath of a full day at the beach, involving lots of sand tracks through the house and sandy, messy baths. The grandparents turned their attention to dinner. It was burger night.

Unlike everyone else, my son’s burger was plain; he wouldn’t let lettuce and tomato ruin his hamburger. The cousins sat together at the bar, boys to one side, the giggly girls on the other. Coughing and vomiting suddenly hushed all laughter and conversation.

“Ewww! Gross,” the girls shrieked. A cousin had pranked my son, hiding a small succulent piece of lettuce in his burger. Everything in my kid’s stomach from the day now decorated his once-plain burger.

I caught my weary head in my hands. This scene was a vivid reminder that our son had issues with vegetables. He started rejecting fresh produce as a wee toddler, but it wasn’t until he began gagging and throwing-up that I accepted his aversion wasn’t in his mind or a childish act of rebellion. With the exception of applesauce, he simply couldn’t tolerate the texture of produce.

As he grew, he enjoyed junk food of every kind like any kid. Candy. Ice cream. Cookies. Soda. Chips. When junior high arrived, energy drinks were the rage, and my son’s friends introduced him to Monster and later, Red Bull.

I felt a helpless as a mom, trying to balance what I knew was ‘normal’ while also agonizing that unlike most kids, my son refused carrots or grapes. He looked the picture of health, but I worried a lifetime of bad eating habits would dog him.

My admonitions that he re-try fruits and vegetables every so often—“Give them a second chance!”—not only fell on deaf ears, they deepened his resistance. All things considering, I let go. I couldn’t fix this. Instead, I choose to prioritize my relationship with him.

And then, one day, everything started changing. My son was required to read Michael Pollan’s The Omnivore’s Dilemma Young Readers Edition for his high school freshman English class. Using the question “What’s for dinner?” as a prompt, Pollan unpacks what is hidden in the everyday foods we consume. My teen son’s curiosity was whet. What he learned appalled him.

“Do you actually know what we are eating, Mom?”

His reaction was pure disgust as he learned what processed food is. Frowning, he read food labels. Around the dinner table he singled out corn, but not in the way you may think.

“Corn-filler is slipped into just about everything we eat. It’s terrible for you!”

I was getting lectured, but I didn’t mind. Every fleeting anxiety I’d had about his attitude toward food vanished. Overnight, he had morphed into an advocate for health and wellness, urging me to quit buying white rice. White rice, he explained, was stripped of all its protein and minerals so it had a longer shelf life.

“Brown rice is loaded with protein. Get that.” Nodding, I listened in silence. This book was teaching him in ways I couldn’t.

When he changed, I had to change, too. Now whole-grain bread for sandwiches and protein-packed energy bars fill my grocery cart. For breakfast, granola fresh out of the grocery storage bins or oatmeal, the old-fashioned rolled oats kind, Not the instant packets, Mom!

I had been regularly buying ice cream for my teen, but suddenly it got freezer-burn. Sugary cereal got stale in the box. My son quit asking me to buy Cool Whip, previously used to top whatever he fancied. He cut back on all of the processed foods I’d stocked the pantry with. Pretzels, Cheez-Its, unacceptable. Energy drinks? No way. He boosted his water intake. Gratefully, he had always liked fish and we stepped up our consumption.

Now on school nights, I tap on his bedroom door. “Tea.”

He’s quit dessert and instead ends the day with hot tea. Taking chamomile back to his room also gives me a chance to say good-night to my high schooler. In the morning out of the corner of my eye, I see him remove a bag of Pringles from his brown-bag lunch.

“That’s junk, Mom. Empty calories.” He reaches instead for almonds and cashews.

“I’m still getting the hang of this!” Truly, I am.

There may come a day when he reattempts a hamburger with lettuce. But even if he doesn’t, his foundational thinking about food and health no longer troubles me.

I know I can’t take any credit for this victory and honestly, it doesn’t matter. I long ago accepted that it takes a village to raise a child. Today, I recognize that books are influential members of this community as well.

Kathryn Streeter’s writing can be found in AARP, The Washington Post, The Week and elsewhere. Find her on Twitter, @streeterkathryn.