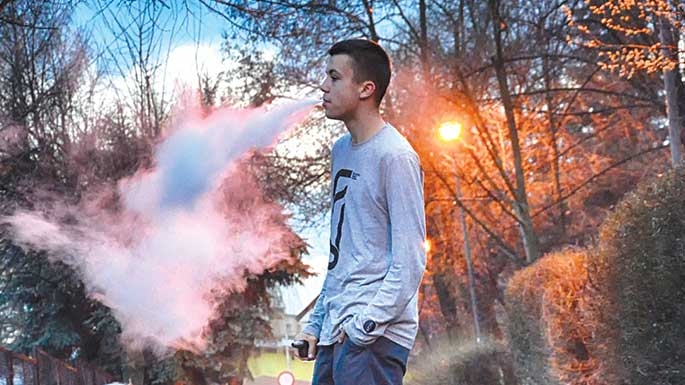 Is Your Teen Vaping?

Here are conversation starters for talking about the dangers of vaping with your kids.

Not too long ago, high school bathrooms hid teens puffing on cigarettes between classes.

These days, cigarettes among Virginia teens are about as cool as payphones. In 2018 just 6.5 percent of teens—an all-time low and below the national average of 7.6 percent—said they had smoked in the previous 30 days, according to a survey conducted by the Virginia Department of Health.

As that statistic continues to drop, the number of teens using e-cigarettes is on the rise. Introduced as a way to help adults stop smoking, e-cigarettes and vaping quickly became popular among teens.

The Virginia Department of Health found that 11.8 percent of Virginia teens were currently using vaping products (the national average is 13.2 percent). What’s more, high school students nationally were asked about their e-cigarette use in the previous 30 days. That number jumped from 11.7 percent to more than 20 percent from 2017 to 2018, according to the National Youth Tobacco Survey.

Amidst a national backdrop of about 1,600 lung-injury cases and 34 deaths tied to vaping in recent months, e-cigarettes are under the microscope. While it’s too early to know the ultimate cause of the recent injuries and deaths related to vaping, the Centers for Disease Control suggests that most of the cases are linked to products containing THC. It has recommended against using e-cigarette or vaping products that contain THC.

There’s also the fear of recent research showing that teens who vape are more likely to transition into other bad habits like traditional cigarettes, alcohol, or marijuana. In addition, some e-cigarettes pack a powerful punch of nicotine—as much in small pods as 20 cigarettes—creating concern that kids could become addicted to the chemical.

Richard Miech, a University of Michigan researcher, shared concerns about the increasing number of teens across the country turning to e-cigarettes, telling the Washington Post, “It seems as if teen nicotine vaping is not going away by itself. Something needs to be done.”

What can be done?

For starters, parents and educators need to understand the perils of vaping and become more comfortable speaking about the trend with children. Here are a few tips for talking with children about e-cigarettes.

Find out what they know…and don’t know.

Are they aware that nicotine—in some cases as much nicotine as 20 cigarettes—is a key ingredient in e-cigarettes? Are they aware that vaping can put them at an increased risk for high blood pressure, irregular breathing, and impaired brain development? Start with general questions like “What do you think about e-cigarettes?” or “Do you know anyone who vapes?” to get a baseline of their knowledge. Follow up by offering practical tips to say no to vaping.

Ask why they vape before telling them why they shouldn’t.

Many teens have been lured to vaping because of flavors like cotton candy and chocolate. Others think of it as a way to get a jolt of nicotine without using cigarettes or drugs. And still others thrive on defying authority and vape because all of their friends are doing it. Once you establish what the attraction is, it may be easier to introduce reasons there are major risks.

Remember that it’s a conversation, not a lecture.

It’s important to share your concern and answer as many questions as possible, rather than simply lecture. Strive for an open dialog, even if that means continuing the conversation over a period of time. Communicating in bits and pieces over several sittings is better than one short conversation that comes off as all-knowing and accusatory.

Dr. Mohamed Ally is the Chief Medical Officer for UnitedHealthcare Community Plan of Virginia and volunteers at free medical clinics in his spare time. He lives with his family in Virginia, and together they enjoy outdoor activities, like camping and hiking Virginia’s historical and nature-packed trails.