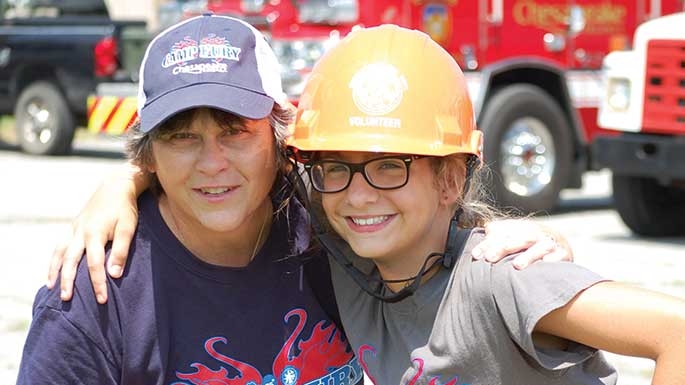 by Marcy Germanotta
Published in Safety
Rate this item
(0 votes)

While going on nature hikes, singing songs, and roasting s’mores around a campfire are often what draws kids to summer camp, some local girls opted to be more adventurous this summer. They chose a camp experience that immersed them full-throttle into career exploration.

Camp Fury, a camp that explores career options in firefighting, was founded in 2009 by Tucson Fire Assistant Chief Laura Baker and Northwest Fire District Division Chief Cheryl Horvath. It spread like wild fire throughout the nation and is now being implemented by many fire departments and Girl Scout councils.

GROWING IN POPULARITY
Camp Fury was brought to Hampton Roads by Lt. Deneé Nichols and Firefighter/Paramedic Jami Salvio, both from Hampton Division of Fire and Rescue, who learned about the camp at a conference five years ago.

This year marks Camp Fury Hampton’s fourth camp session, and attendance has steadily increased. The Chesapeake Fire Department kicked off their first camp in 2016. Now in year two, camp organizers Battalion Chief Christine Dosmann and Firefighter Paramedic Mandy George agree the camp is growing in popularity among girls and their staff who volunteer for the camp.

Mandy George, who manages Camp Fury Chesapeake, says she was super excited to have the Norfolk Fire Department offer their first camp this past July. Mandy volunteered to help at the camp and gave support to their camp manager, Firefighter Paramedic Darlene Braun.

With a core group of dedicated women from the three fire departments, Camp Fury has a strong foothold, and plans are already underway for next year’s camp sessions.

“We share equipment, we share ideas, and we volunteer at each other’s camp,” Christine Dosmann said.” She noted that the Girl Scouts of the Colonial Coast are a key part of Camp Fury. Without the partnership with the Girl Scouts, Camp Fury would not exist.

“At Camp Fury, and at all Girl Scout camps, girls are immersed in a supportive, all-girl environment where they develop into go-getters, innovators, risk takers, and leaders,” said Tracy Keller, CEO of the Girl Scouts of the Colonial Coast.

BUILDING SELF-CONFIDENCE
The goal of Camp Fury is to introduce girls to firefighting as a career, give girls the chance to meet women in fields typically dominated by men, and provide experiences for girls to try new things and build self-confidence and teamwork skills.

“Many of the girls at Camp Fury had not considered firefighting as a career for them before coming to camp,” Norfolk Firefighter Paramedic Darlene Braun said. “We’re showing them that they can be anything they want to be.”

In addition to learning about firefighting, the girls also learn about other public safety careers. Girls who attended the Norfolk camp spent an afternoon with the Norfolk Police Department, where they watched a police canine unit demonstration, learned about a bomb robot, and took part in physical training alongside female police officers.

Tours of the emergency departments at Sentara Norfolk General Hospital and Children’s Hospital of The King’s Daughters were also on the schedule for the week, as well as a stop at Naval Station Norfolk, where the girls met with Helicopter Mine Countermeasures Squadron 14 (HM-14).

One of the goals of hosting Camp Fury sessions is to feed the pipeline and increase the number of female firefighters. Nationally, fewer than five percent of firefighters are women, and far less hold leadership positions.

While low female employment in this career may be attributed to the job’s physical demands, the occupational culture has also been seen as an impediment. Fire departments are working to create inclusive workspaces and are proactively recruiting women through special programs like Camp Fury.

“I’ve found it to be a challenging career,” Christine Dosmann said. “You get to put out fires, tear up cars, and hang from ropes. Training is a blast! At the time I applied, I had two small children. I thought being a firefighter would be a positive role model for my kids. The schedule was also a consideration. Firefighters are on duty 10 days a month, which means you get to be home 20 days a month. But, for me, the most important thing was having the opportunity to help people, often on some of the worst days of their lives.”

WELCOMING ATTITUDE
At Camp Fury, campers are mentored by women firefighters, ride fire engines, spend the night at the station, and complete challenging scenarios while working as a team. In one scenario they train with 30 pounds of equipment, including full turnout gear and self-contained breathing apparatus (SCBA) as if they were actual trainees.

Since this is an opportunity for them to live the job, they also tackle forcible entry with axes and Halligan bars, learn search and rescue techniques—including how to break a car windshield without harming the person inside, and are taught how to hold a hose line with the full force of a fire engine pump behind them. Most of the camp staff are women, but a few men fire fighters and EMTs are man enough to be Girl Scouts for the week.

“I think it’s important to see how we work together, men and women, and to see there is a very welcoming attitude in the fire service for the girls, so they can see this is an actual option,” said Mandy George, who has been with the Chesapeake Fire Department for six years.

Mandy says it’s a tossup of which activity at Camp Fury draws the most interest. Rappelling at Chrysler Hall or climbing an aerial ladder that goes up nearly 60 feet—a training exercise most adult firefighters find daunting—are skills the campers find the most fulfilling.

Christine and Mandy agree that having more opportunities for girls to see and learn from women firefighters will make a difference. They know girls are sharing their experiences with moms, aunts, sisters, and friends, dispelling myths and igniting interest in a career that was previously off limits.

Girl Scouts unleashes the G.I.R.L. (go-getter, innovator, risk-taker, leader) DNA in every girl, grades K-12. Adventures await them in troops, groups, or as individuals who want a attend special events or camps for a challenge. Find out more at www.gsccc.org.

Marcy Germanotta is the communications and marketing director with the Girl Scouts of the Colonial Coast and supports a mission to help build girls of courage, confidence, and character. She serves on several boards, including the HR Chapter of the  Public Relations Society of America, Virginia Professional Communicators, and the  WHRO Advisory Council. Photography is her passion!