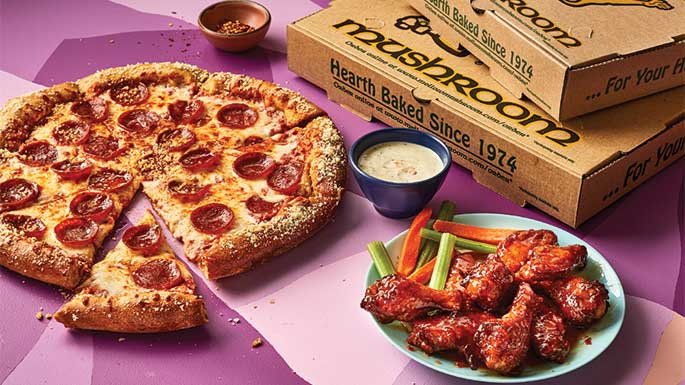 by Lorraine Eaton
Published in Nutrition
Rate this item
(1 Vote)

There’s more than pizza at this art-filled eatery in Virginia Beach.

There I sat sipping a craft cocktail, nibbling bruschetta and feeling quite mellow actually, when a cheeky, toothless grin appeared above the booth opposite me. It vanished only to appear again, and then again.

But no worries at Mellow Mushroom, the Virginia Beach Oceanfront’s newest eatery, a boisterous, art-filled, Bossa Nova-themed showplace where grown-ups and kids coexist in perfect harmony.

Children receive their own $5.50 menus folded into little envelopes with three crayons tucked inside. The French bread pizzas, meatball-and-mozzarella stacks, and other entrees arrive with a drink and sliced apples. And the crossword puzzle, pizza pie maze, and kids’ Sudoku on the menu can keep the moppets plenty busy.

Grown ups, because we rule, get a few more perks, starting with the cocktail menu, surprisingly inventive for a place that specializes in pizzas.

Keeping with the hippy theme (the chain was started in 1974 by a couple of college kids), it features drinks with names like Purple Reign Sangria and Grateful Dead—a whirligig of vodka, rum, and gin flavored with raspberry. I tried the Lemon Submarine, a warming portal into cooler weather that combines Woodford Reserve Bourbon, St-Germain Elderflower Liqueur, iced tea, rosemary, and Earl Grey bitters. The more sober “Magic Mocktail” offerings showcase Mellow’s fresh ingredient approach with elixirs like the Strawberry Lemon-Limeade with its foundation of fresh strawberry puree.

Appetizers, err, make that “Munchies,” include a savory “Magic Mushroom Soup” served warm and so thick that the spoon left tracks. A tangle of chewy grilled shiitake, button, and portobello mushrooms added earthiness and texture, and a confetti of white cheddar and chives added pops of unexpected flavor.

Even with all that, it’s the stone-baked pizzas that draw the crowds, and for good reason. The menu runs 15 deep with a choice of thin, thick, or gluten-free crust. Each version gets a slick of garlic butter and parmesan before any topping touches it.

We tucked into a Philosopher’s Pie with a golden, blistered crust that hung over the sides of the pan. The three-cheese base of feta, mozzarella, and provolone came studded with cubes of grilled ribeye, portobello strips, and artichoke hearts. Only the latter seemed out of place.

Pizzas Range from Mighty Meaty to Wild in Havana

All around us, people were eating pies, not one of them humble. Consider the “Mighty Meaty” with its five carnivorous offerings from pepperoni to honey ham. Or the “Wild in Havana” a respectful nod to the noble Cubano sandwich. The choices make the build-your-own section of the menu seem something of a dare.

For lighter appetites, there are salads. For something in between, hoagies. And for the heartiest of all, the handsome half-pound burgers on slightly sweet brioche buns. Our “Ritz Burger,” made with all-natural Angus beef from the family-owned Harris Ranch, was a strata of juicy, flavorful beef, sweet, tender caramelized onions, requisite lettuce and tomatoes, and to our delight, a shaved dill pickle tucked inside.

The fare is something of a surprise coming from this eatery with its hippy-dippy name. So is the decor. Each Mellow Mushroom has a theme which is interpreted in murals and original art. The location at 35th Street and Atlantic Avenue hews to a Bossa Nova theme right down to the custom-made signs on the restroom doors.

The Virginia Beach location, which opened in October, was carved out of a space that once housed the Sheraton hotel’s indoor pool. Owner Jay Shah, who operates Mellow Mushroom locations in Fredericksburg and Short Pump, said that the theme was chosen for its local relevance . . . and his own love of Brazil.

Jazz great Charlie Byrd, who was born in Suffolk, discovered the Bossa Nova style of music in Brazil and brought it to the United States. The massive, colorful murals, the pink barstools, the wavy design on the floor of the porch—all pay homage to the theme.

Down below on an 80-seat patio and bar shaded with triangular sails are two more nods to local history. The peacock mural harkens to the Depression-era Peacock Ballroom, an Oceanfront dance club where the biggest name bands of the day played. And that massive rotating globe out front? It’s reminiscent of the globe that once hung over that dance floor.

Jay said he had a wonderful time foraging in the chain’s cavernous warehouse of artwork for just the right pieces for the beach location. But when the globe arrived, engineers informed him that it required an expensive refit to withstand hurricane force winds at the beach.

It survived the remnants of Hurricane Ian with minimal damage and is destined to become an Atlantic Avenue landmark, and one well worth seeking out.

Lorraine Eaton, former Staff Epicure at the Virginian-Pilot, is co-author of the “Food Lover’s Guide to Virginia,” and author of “Tidewater Table,” a local bestseller. She has won numerous state and national writing awards, and her work has been included in “Best Food Writing,” an annual anthology of the best American work in the genre. Lorraine has a daughter, Peyton, who is attending university. She resides in Virginia Beach.