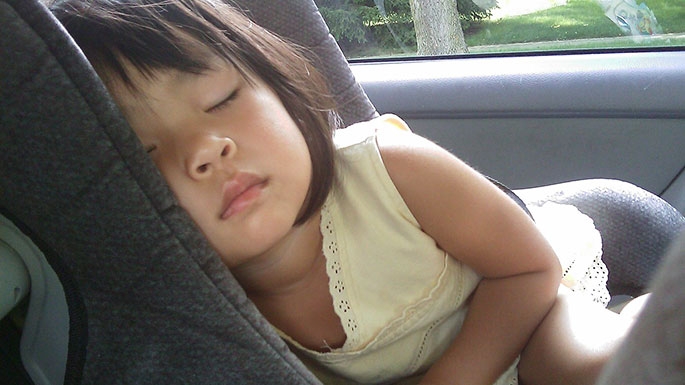 Too many hours in a car seat is bad for your child’s health. Find out why!

Have you carried a car seat? They are heavy and awkward. Parents have a diaper bag and a huge car seat to lug about. I often wonder why people don’t just pick up their baby. Babies are much easier (and lighter) to carry than car seats.

I often see parents carrying their sleeping babies into the office in the car seats. This extra time in carriers (or containers) is leading to a condition called Container Baby Syndrome (CBS). In order to understand CBS, you must first understand SIDS.

Sudden Infant Death Syndrome (SIDS) is unexplained death of an infant less than a year old, usually during sleep. Infants from 2 to 4 months old are at the highest risk. Other factors that can increase risk of SIDS include prematurity, soft sleep surfaces, stomach sleeping, overheating, family history of previous SIDS, and second-hand smoke.

To decrease the risk of SIDS, place your baby only on his or her back to sleep. Keep the crib bare: use a sleep sack rather than blankets. Don’t co-sleep. Don’t overheat: a cooler room is better. Use a pacifier. Breast feed if possible. Immunize your child.

The 1992 guidelines encouraged the “Back to Sleep” campaign. This campaign taught parents to place their babies on their back to decrease the risk of SIDS. It worked! The rate of SIDS decreased by 50 percent. However, it had a side effect, namely Container Baby Syndrome (CBS).

The immobilization from the prolonged time spent in containers can cause issues including developmental delays, such as delays in rolling, sitting, crawling, and even walking. It can cause a flattened back of the head and even facial asymmetry. It might cause torticollis, a condition in which the neck is twisted to one side. The decreased movement can delay strength and coordination as well as cause increased weight gain due to inactivity.

Let me be perfectly clear, babies need to sleep on their backs in their parent’s bedroom on a separate flat, firm sleep surface such as a crib for at least six months, preferably a year. They also need supervised tummy time when they are awake and on a safe flat surface (like the floor) where they cannot fall.

This supervised tummy time should occur three times each day for 15 to 20 minutes (while awake). If your baby falls asleep during tummy time, simply roll her onto her back and place her in the crib with the siderails up.

Sometimes parents notice that their babies cry when placed on their tummies. That’s okay. It’s exercise. Sometimes I don’t like exercise either. Tummy time strengthens the muscles of the neck, back, and trunk. This time on the tummy fosters development of movement and coordination.

You can use toys, games (peek-a-boo) and songs to encourage your baby during tummy time. You can help her practice position changes such as rolling from tummy to back.

When you hold your baby, you help him or her gain strength. Don’t prop bottles; hold your baby when feeding. At 4 months or older, sit your baby on your lap away from your body so that your baby can practice holding their head up. You can turn your baby toward you and stand him or her on your lap, while supporting his or her waist so that your baby can strengthen his or her legs. These exercises help infants gain muscle strength and coordination, which they will need to sit up, crawl, pull to stand, and eventually walk. Babies need to move to gain strength and coordination.

Here are a few key points to remember: