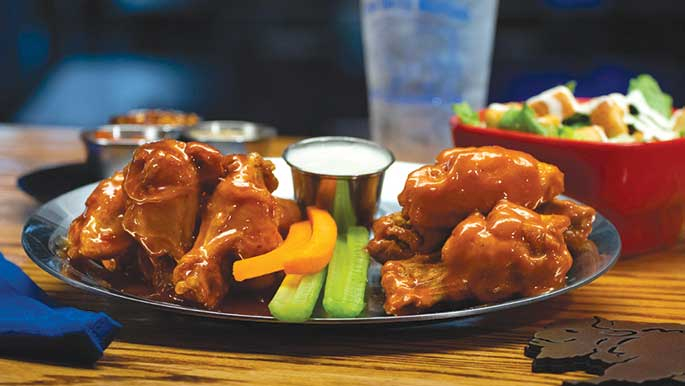 by Lorraine Eaton
Published in Nutrition
Rate this item
(0 votes)

Find out why Guy Fieri of the Food Network raved about The Dirty Buffalo’s wings.

At the Princess Anne location of The Dirty Buffalo, 25 big-screen TVs line the walls, and a queue of taps stand ready at the rail. But this is no sports bar.

“We’re family driven,” said owner Russell Gilbert, himself a father of three. “We don’t sell shots. We don’t show UFC fights. We sell maybe 80 percent food, give or take, and there’s a bunch of claw machines in there.”

And get this: at the fourth and newest location in Chesapeake, for a limited time kids 12 and under eat free.

The Dirty Buffalo’s family of four locally owned restaurants is a rare find—places where grown-ups can sip a libation and suck every warm and meaty morsel off authentic Buffalo-style wings while watching their teams play. Meanwhile, kids can chow down on their own full $5.99 meals and then repair to the arcade.

Russell and his wife, Stephanie, met in Buffalo, the epicenter of the wing universe. They moved to Virginia when she enrolled in William & Mary’s law school. Ardent Buffalo Bills fans, they couldn’t find a spot to slake their need for real Buffalo-style wings, the kind that are deep fried, served hot, tossed in sauce with blue cheese dressing on the side.

The couple eventually moved to Norfolk, where Russell earned his marketing degree at Old Dominion University and plotted the opening of his first location near the college, where you’ll find the rescued bar top from the revered 4400 Club—reason enough to visit. His wings were a hit, and a second location opened in Little Creek in 2017, followed by a Princess Anne location in 2019 and the most recent Grassfield location in 2021.

These days, thousands of wings fly out of The Dirty Buffalo locations each week, for good reason. “The best wings south of Buffalo” is how the Food Network described them when Guy Fieri dropped by in 2017.

The regular menu sports more than 30 house-made sauces and rubs. There’s mango-habanero, spicy garlic-parmesan, margarita buffalo, strawbenero bbq, and “Dumb Dumb,” a sauce so hot that an additional charge applies. Plus, each week Gilbert swirls up a special sauce. Think chicken-and-waffles, maple-bacon, peanut butter-and-jelly made with strawberries, or the recent sweet potato-hot sauce.

Wings are fried—never, ever baked—with a gloss of sauce and, for a small additional charge, served with blue cheese or ranch and celery or carrots.
Recently, a crowd of Cowboys fans tucked into takeout piles of chicken drums and flats coated in six styles of sauce. The meat ends of the drums were the diameter of golf balls, and the flats had plenty of protein to gnaw on. Each had the perfect balance of crunch and chew, but it’s the sauces that make The Dirty Buffalo the place for wings.

The sweet heat mesquite, a thick cordovan-colored sauce, tasted boldly smoky but, like all that we tried, somehow didn’t overpower the flavor of the bird. Garlic butter BBQ, the weekly special, came mildly spicy with pops of minced garlic. Korean BBQ, flecked with sesame seeds and garlic, had a slightly sweet, slightly savory flavor. It’s no surprise that the two standouts were sweet sriracha, a slick of jammy, glistening orange with a mild, lingering heat, and Cajun buffalo, an assertively spicy, rust-colored sauce with a kick. Those two took first place honors at the 2017 National Buffalo Wing Festival, the Super Bowl of the wing world.

The Dirty Buffalo also offers burgers, sandwiches, salads, and subs. Plus there are the “dirty” plates, called “garbage plates’’ in Gilbert’s native Rochester, beds of crispy fries, beans, and slaw, and/or macaroni and cheese heaped with pulled pork, burgers and/or hot dogs, and other stuff.

“Picture Thanksgiving,” Gilbert said, “where everything eventually makes its way to the middle of the plate and you just shovel it in no matter what. It tastes good because they are all good ingredients. So as long as everything on that plate is good, it’s all going to work out. That was the logic.

“It will make you take a nap afterwards,” he warned.

Lorraine Eaton, former Staff Epicure at the Virginian-Pilot, is co-author of the “Food Lover’s Guide to Virginia,” and author of “Tidewater Table,” a local bestseller. She has won numerous state and national writing awards, and her work has been included in “Best Food Writing,” an annual anthology of the best American work in the genre. Lorraine has a daughter, Peyton, who is attending university. She resides in Virginia Beach.