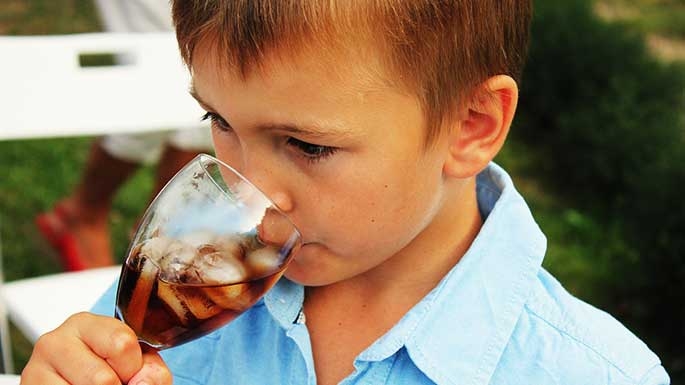 Find out why caffeine and kids don’t mix.

I was sitting in a Starbucks after Pilates, waiting on my skinny latte when I noticed how many children and teens were in the café. Most seemed to be with their parents (thankfully). Surprisingly, many were consuming caffeinated beverages. I started thinking about our relationship with caffeine as a society and what messages we are passing to our children.

Don’t get me wrong…I’m a caffeine consumer. I start each day with a cup of tea. I’m just questioning if caffeine is the best thing for children. A recent article in the February 2019 issue of Pediatric News recommends that parents monitor the amount of caffeine consumed by their children and when they consume it.

The American Academy of Pediatrics (AAP) recommends that water should be the primary source of hydration for children and teens. They recommend that children younger than 12 years of age should not consume caffeine and that children over 12 years should consume no more than 100 mg./day (one 8-oz. coffee or two 12-oz. sodas). Still, a study in 2014 in the Journal of Pediatrics found that approximately 73 percent of children consume caffeine on any given day.

Don’t be fooled: although coffee and tea are the most common sources of caffeine, caffeine can be found in foods as well. Sources of caffeine include certain flavors of ice cream, jelly beans, chocolate, kola nuts, cocoa beans, and caffeine pills. There are even caffeinated water drinks. One ounce of chocolate syrup contains 4 mg. of caffeine. Ice cream sundae, anyone?

Caffeine is a stimulant. It increases alertness, movement, concentration, energy, and clear-headedness. The Food and Drug Administration (FDA) considers caffeine as generally safe in low doses. It does cause mild physical dependence. Try to stop your daily intake and you’ll soon feel a headache, difficulty concentrating, and fatigue.

Caffeine does have side effects. Drink a couple cups of coffee and you will notice them: jitteriness, nervousness, upset stomach, difficulty falling asleep, and even trouble concentrating. Although I love coffee ice cream, I’ve noticed that if I enjoy it after dinner, I have trouble falling asleep later. It takes 5-7 hours for your body to eliminate half of the caffeine you’ve ingested. It’s best not to consume caffeine for 6 hours before bedtime. Within 8-10 hours 75 percent of the caffeine has been eliminated by your body.

Caffeine toxicity may be lethal, although death from caffeine is rare. Very high doses of caffeine can cause agitation, irritability, anxiety, nausea, vomiting, diarrhea, flushing, increased urination, hypertension (elevated blood pressure), and even an irregular heartbeat. Caffeine powders are extremely dangerous as caffeine powders can contain 1,600 mg. of caffeine in 1 tsp.     Toxic doses for adults can occur over 5 grams of caffeine (think 6 gallons of coffee or only 2.5 tsp of caffeine powder). The toxic dose for children is unknown but may be as low as 100 mg./day of caffeine for young children and 400 mg./day for teens. Warn your children not to consume caffeine powder and to use caffeine with moderation. Children less than 12 should avoid caffeine entirely.

Kids need water and milk. Two cups a day of low-fat milk is recommended for children and teens. Toddlers between the ages of 12 months and 24 months need whole milk. Infants from birth to 1-year need breastmilk or formula. Do not give infants less than 6 months water.

The good news is that children are consuming fewer sodas. That’s great progress. As parents we need to talk to our kids about caffeine as well as be good role models. Moderation is key.

Dr. Melanie J. Wilhelm is a Doctor of Nursing Practice and a Certified Pediatric Nurse Practitioner in Norfolk, as well as an Assistant Professor at Old Dominion University. Her book, Raising Today’s Baby: Second Edition, is available on Amazon. Read more at RaisingTodaysChild.com. Follow her at www.facebook.com/RaisingTodaysChild and www.twitter.com/Rzn2dayschild.